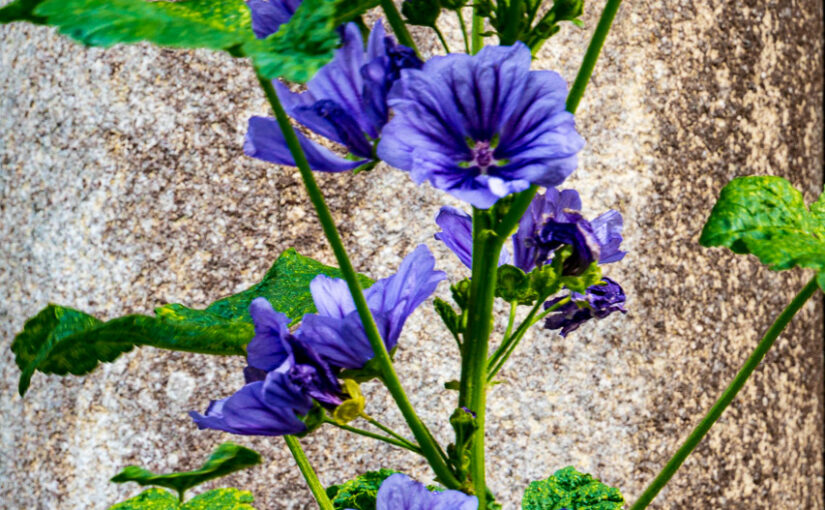 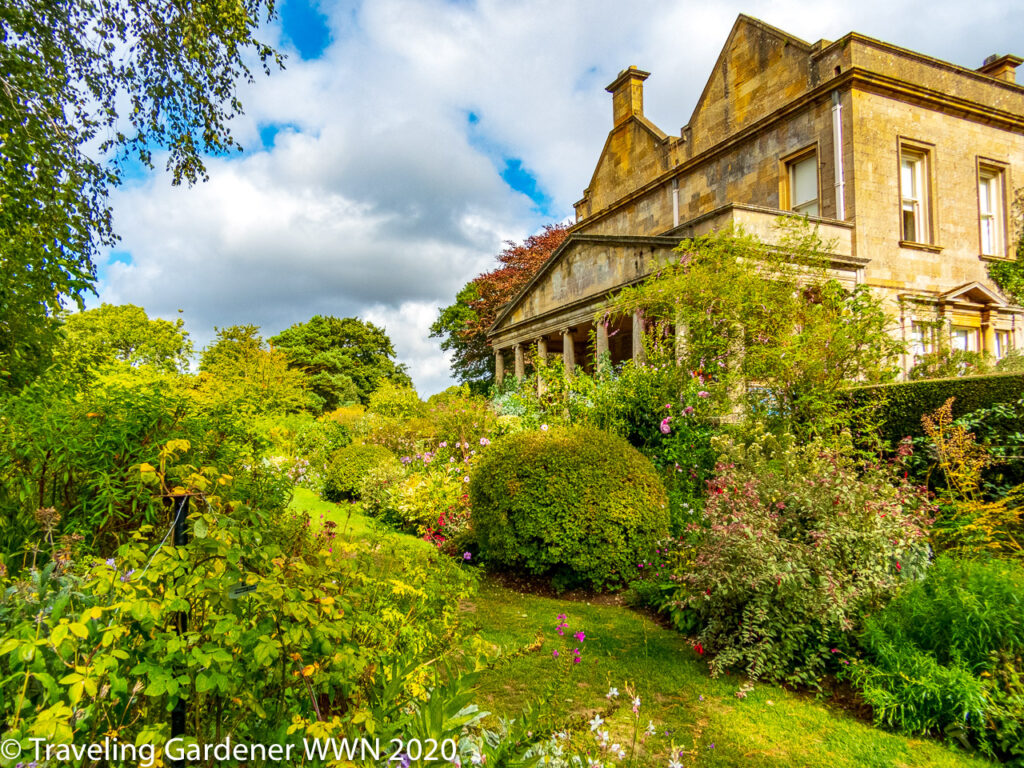 Sometimes the most striking gardens are not those perfectly plotted on flat ground. Hills, valleys, and rocks may seem like less than favorable conditions, but gardeners are not easily deterred and will find a way.

In the hilly northern region of the Cotswolds, the Kiftsgate Courts Garden is a family garden designed and planted by three generations of women. In 1919, just after WWI ended, Heather Muir decided to make a garden around her newly purchased Victorian home. It was a grand house perched on a flat patch at the edge of a steep-slope, and designing a garden was not a simple undertaking, but that did not stop her. Only 1/2 mile from the famed Hidcote garden created by Lawrence Johnson, an American, and  considered by some the most influential English Gardener of the 20th century.  Heather and Lawrence Johnson developed a friendship around their shared interest in plants and garden design.

One of her first projects was to plant hedges and add a colorful border of flowers in the house’s upper area. She hired experienced Italian gardeners to terrace the steep slope below the house, creating a pathway down to take advantage of the surrounding countryside’s views.

In the 1930’s Heather first opened her garden to visitors to raise funds for the District Nurses Association and so began a practice of sharing the garden with admiring visitors.

I garden on a flat piece of ground, so I am always impressed with what can be done on a steep slope. Heather Muir decided to terrace the hillside creating a lower garden with shrubs and trees accessed by stone stairs. A summer house was built into the slope’s side, so the countryside’s expansive views could be enjoyed.

Kiftsgate is known for its roses. Sometime in the 1930s, Heather planted a white climbing rose. Today, it climbs up three trees in the garden, some 60 feet (18 m) high and 75 (22 m) feet wide, even though it is hard pruned annually. The origin of the rose is lost, but the English Rose expert Graham Stuart Thomas cataloged it and named it the Kiftsgate Rose. It is very happy growing in this garden, and every summer puts on a cascade of white blooms. Anne, the current gardener, offers a warning, “beware it can take the roof off your house if you let it go.”

In the 1950s, Heather’s daughter, Diany Binny, took over the house and the gardening adding her touch to the plant palate. She began introducing sculpture to add artful interest among the plants. In the 1960s, she added a half-moon swimming pool surrounded by lawn as a punctuation mark at the base of the terraced garden.

In the 1980’s Anne Chambers, Heather Muir’s granddaughter made Kiftsgate her home and continues gardening with a passion for plants. Today Kiftsgate Courts garden is a private, personal garden worked on by Anne, her husband, and two full-time gardeners. The garden and its proper English tearoom are open to the public for limited hours during the gardening season.

My visit was in early September, and the four square and terrace garden were lush with geraniums, dahlias, roses, asters, hydrangeas, and phlox spilling into the pathways. The annuals surround perennials with contrasting foliage and textures. A particular favorite in the garden is Deutzia, a small shrub with starry white flowers. The tall honey-colored stone house with a balustrade surround at the back makes the entire scene grand and imposing, while the volume of flowers illustrates your every image of an English cottage garden.

Walking along a long yellow and orange flower border leads to a dramatic contemporary surprise. Anne Chambers converted the little-used tennis court into a water garden. Surrounded by a mature yew hedge, a small window through the greenery gives you a glimpse of what’s to be found when you round the corner.

A dark water pond with a patch of floating lawn reached by white paving stones dominates the space. Reflected in the water are 24 stainless steel stems with gilded philodendron leaves.

Water drips from the leaves as they sway in the breeze. Just looking at the surrounding trees’ reflection and the bronze leaves in the water is a magnificent view made even more lovely by the sound of trickling water. A summer house of weathered wood furnished with a perfect seat entices you to enjoy the view.

I could barely tear myself away from this tranquil setting to wander on to the orchard of apples, quince, pear, and plum trees. The orchard is underplanted for spring color with tulips and wildflowers brightening the grounds before the trees bloom in spring. Framing the orchard entry is a mound accented with a chevron pattern of colored stones. This mounded space was created from the tons of soil moved in digging out the old tennis court.

Walking uphill through an avenue of tulip trees leads to an 18 feet (5.5m) stainless steel leaf sculpture. The three sides of the leaf are veined with a mosaic pattern inspired by a mosque in Turkey.

Beyond the sculpture, you are at a high point looking at the Vale of Evesham (a small village) and toward Wales. While I wandered about, church bells began to ring, not to note the hour but with a chorus of song that accompanied me back down through the tulip trees to the central gardens.

Each of these women gardeners over the past 100 years has added their special touches to the garden. Each gardener honored the sense of place, caring for what had gone before, and adding their own creative, loving touch to the garden. The trees and shrubs continue to grow, changing the views, and blocking the light falling on the garden beds, prompting redesigning and pruning. Imagine looking upon a rosebush flush with blooms every summer and feel a sense of an annual visit from a loved one.

Walking along a path to the summer house, you touch the “Mother and Child “sculpture placed by your mother. When you reach the lawn, you look out over the countryside view looked upon by friends and family over the garden’s many years.

By the time I walked uphill and down, out though and around the orchard, then downstairs in one direction and up yet another set of stone stairs all the while surrounded by cypress, copper beech, pines, and many other trees, I began to grasp the size of the garden. As a gardener, I realize the need for regular pruning and raking. There are shrubs, both spreading and upright, requiring care and feeding, especially as some plants, like roses, are 80 years old.

The yew and box hedges clipped once a year requires a 10-week commitment to trim. I was tired and overwhelmed just thinking about it. At the end of the day, when I had the opportunity to speak with Anne Chambers, I failed to tell her how beautiful the gardens were and how splendid the garden design is utilizing the grounds’ topography. I did not mention how the water garden with the gilded leaf waterfall and the half-moon pool is indelibly marked in my mind as garden highlights I would forever remember. Instead, I mentioned how much work it would be to care for such a garden, and in truth, it is. But I still regret I didn’t say more about how much I admired what her family created. Fortunately, I did remember to say thank you for sharing her garden with us. 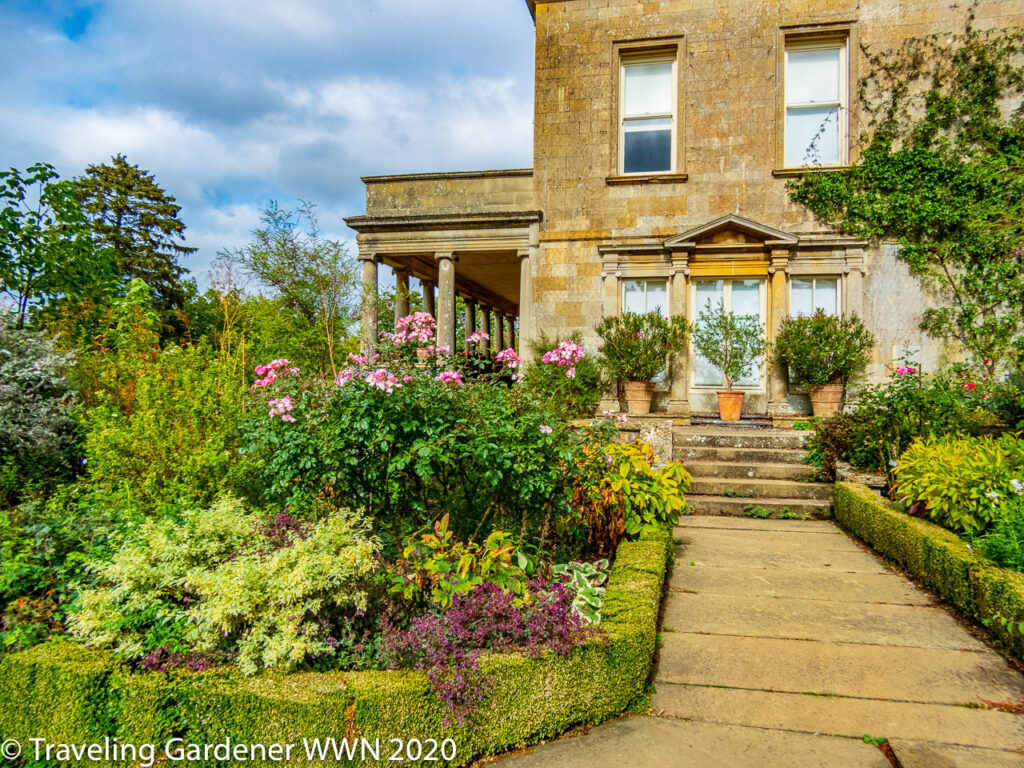 Notes from a Garden Diary on the Kiftsgate Courts Garden website http://www.kiftsgate.co.uk

Anne Chambers:  “Anticipation is one of the joys of gardening.”

“Being observant is the key to being a good gardener, “

“I cannot imagine life without the garden.”

In October 2020, I attended a Zoom lecture by Anne and Johnny Chambers, sponsored by the Royal Oak Foundation, the American Affiliate  of the National Garden Trust of England.

Anne has a daughter. Perhaps family gardening will continue at Kiftsgate Courts Garden. 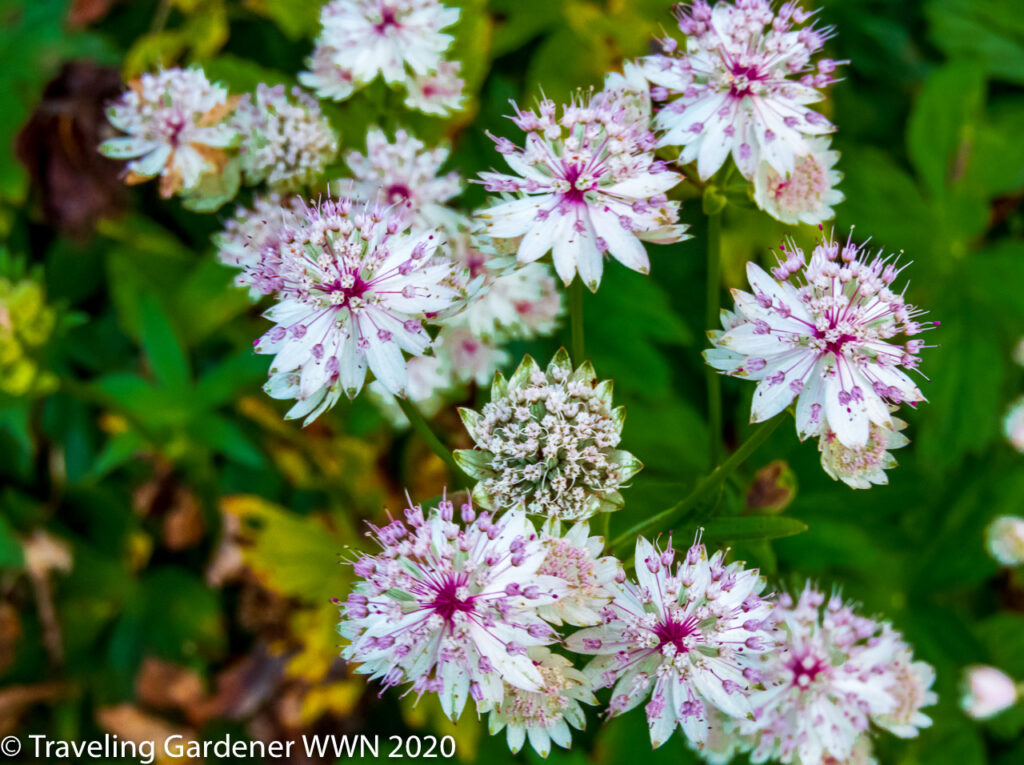