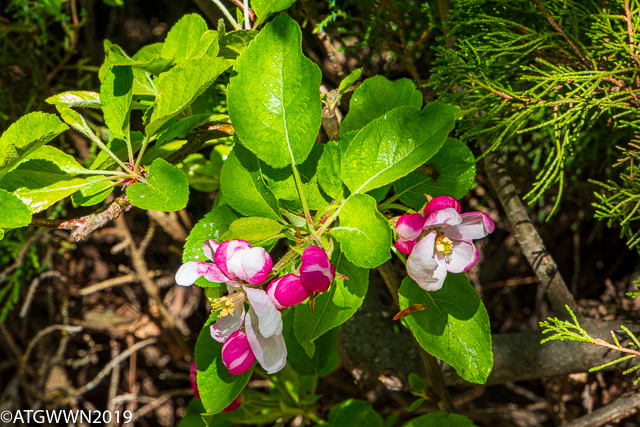 Recently I went to Spokane, WA to speak to the Inland Empire Gardeners*, a phenomenal garden club with hundreds of members and unaffiliated with any national club organization. This club operates under a board of directors, and a three-sister management team that keeps its members educated about growing trees, shrubs, flowers, and vegetables in Spokane Valley.

I had the morning free to walk along the downtown Spokane Riverfront giving me a chance to see the freshest spring green, the wild rushing water of the Spokane River, and a display of public art that would make any city proud. Cool temperatures made for late spring, and many trees had yet to leaf out.  Only tiny bits of green were reaching toward the sun and crab tree blossoms made clouds of pink. The lilacs (which the city celebrates with the Lilac Bloomsday Race the first Sat. in May) were barely buds on the shrubs.

The Lilac Bloomsday Race began in 1974, and today, some 50,000 participants cover the 12K course beginning and ending in downtown Spokane.  But here too, gardening is celebrated, the steel sculpture “Running Together” by artist, David Govedare (installed 1985),  and the steel runners were temporarily offering free gardening gloves to help locals get in the spirit of the season.

In the early morning under a bright blue sky red and yellow tulips danced in the wind and long sections of the riverbank were a ribbon of yellow forsythia, under a canopy of blooming pink cherry trees. Walking in the early morning with my jacket and hat in the bracing wind is a rare moment for me. Spokane is a land of four distinct seasons, and while I have lived in the desert southwest so long that I don’t remember hard winters, I find spring and fall stir the most seductive memories of pleasant days. 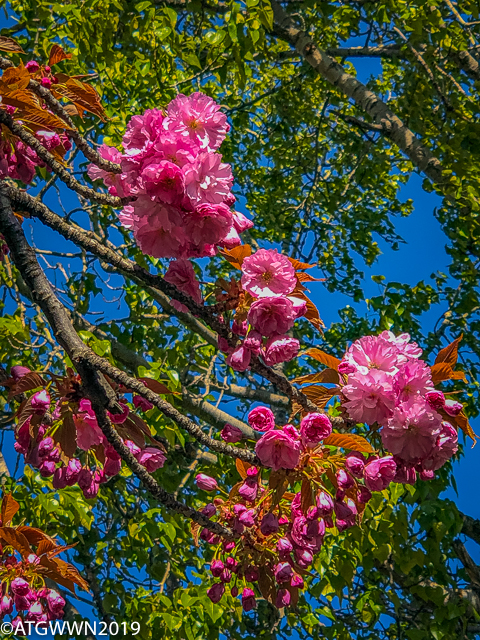 The riverwalk is a place for everyone to enjoy. In the playground, a giant red flyer wagon brings out the kid in all of us. 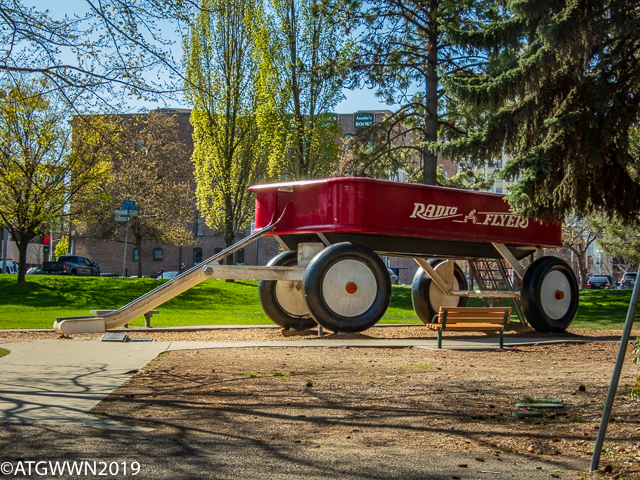 Since it was early in the day and no children were playing, I took a turn on the shiny slide, smiling all the way down. 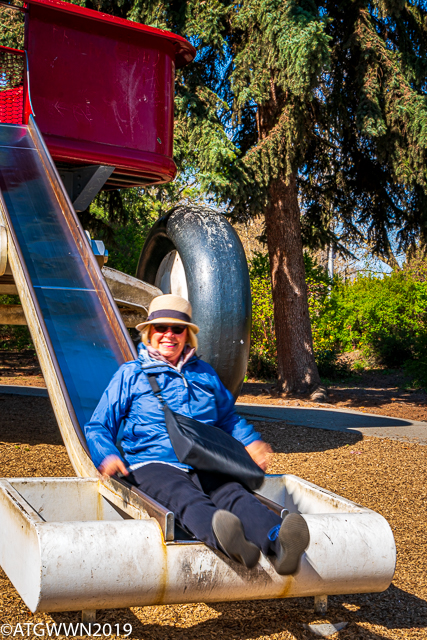 The Spokane River was once the site of a railroad switching center, with five lines rolling through carrying timber, grain, and crops throughout the country.  All that remains today is the clock tower of Great Northern Railroad Depot. 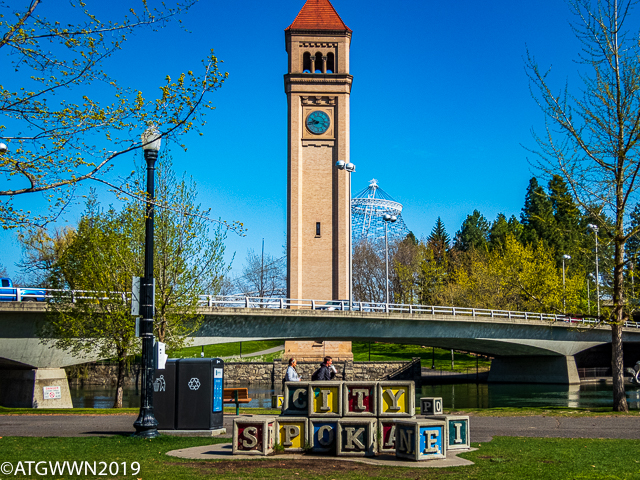 The 1974 exposition was the catalyst to remake the city’s riverfront. Today contemporary architecture and a collection of public art sculptures celebrate the downtown transformation. 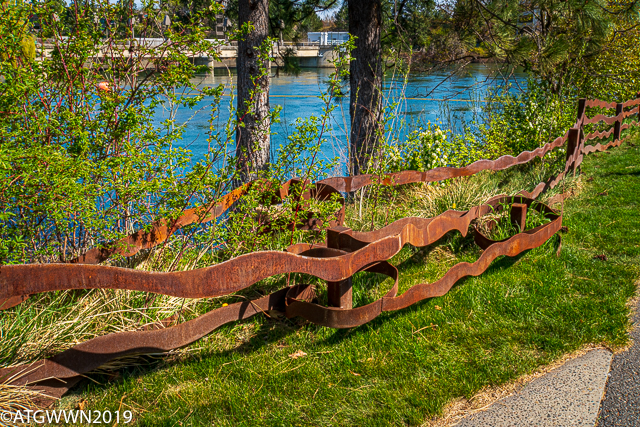 The best bit for me was an 1100 ft’ length of artistic barrier along the riverwalk. I call it a barrier because it is an art piece cleverly and purposely designed to keep tipsy revelers, excited children, and frisky dogs from getting too close to the river’s edge. It is marvelously beautiful with vignettes of Spokane history and city life illustrated along the way.

The Great Spokane fire of 1889 which destroyed the downtown is represented in steel. 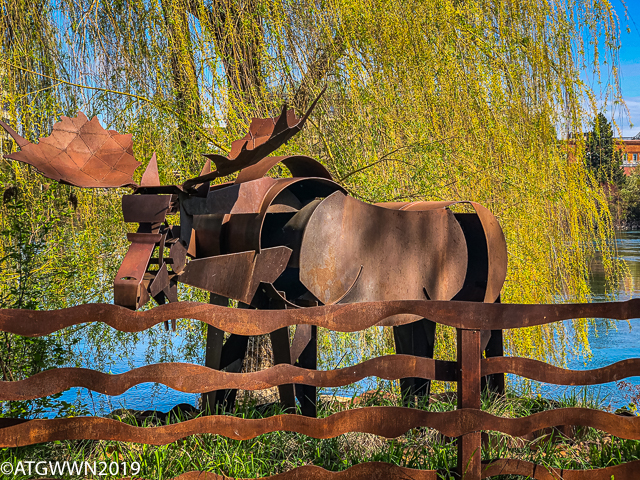 A moose, shown as if he had just wandered in from the hills, stands near the willows in easy reach of a favorite food. 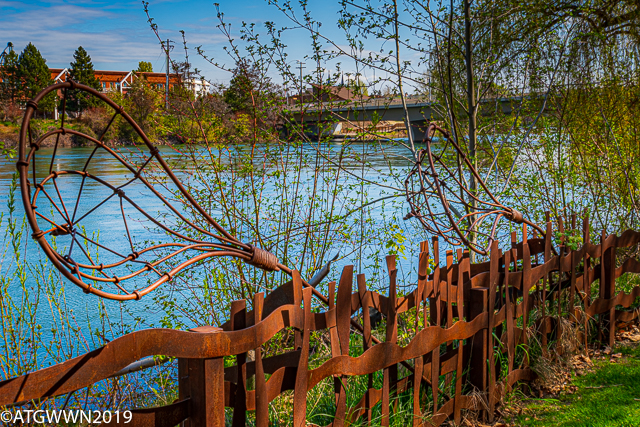 Long handled fish baskets, once used for catching salmon in the spring spawning run, represent what was a way of life along the river. 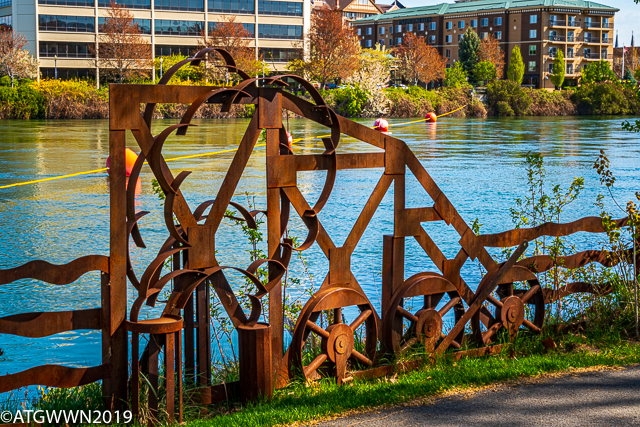 Groups of workers heading to the steam trains and the water wheels for generating power are all part of the scene.

The wavy fence panels look like the water rushing by in the river below. The work is titled Tapestry** and it blends story and texture with the landscape. 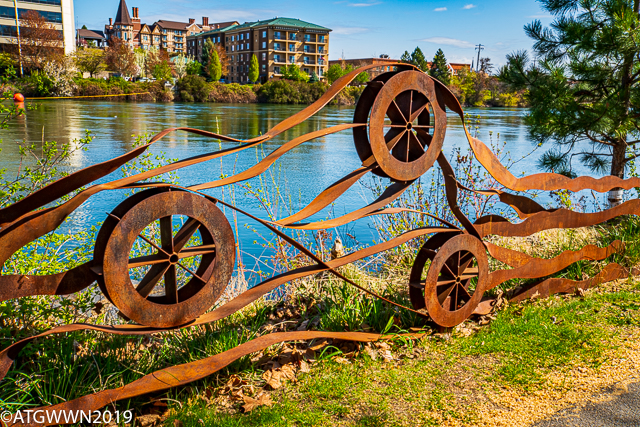 There are more vignette panels I failed to capture in photos, but the entire experience an engaging walk.  Tapestry was handcrafted by local artists Bill and Karma Simmons. They have the best description of who they are on their website, “We like to eat, drink wine and make stuff,” and they have made some beautiful stuff. 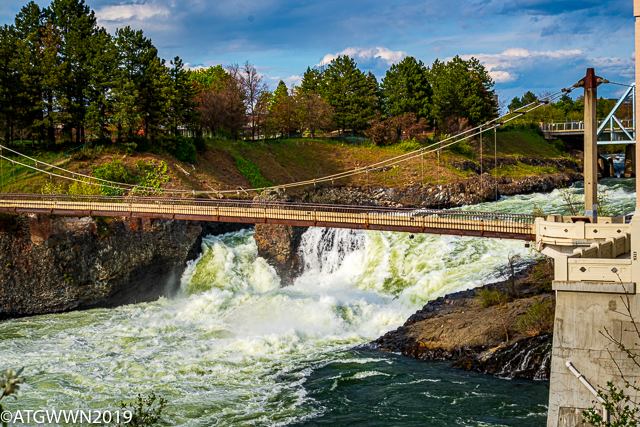 The walk leads on to Washington State University and Gonzaga University. Both have flowering trees and shrubs on the campuses and a prime view of the river. 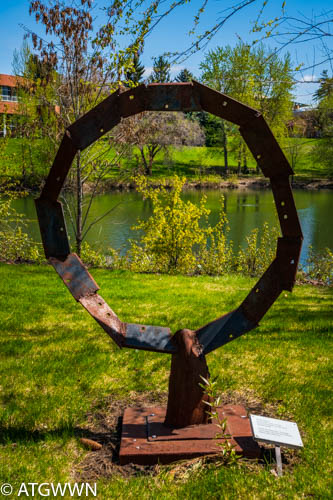 The art center at Gonzaga was open and we wandered in to warm up and explore the faculty exhibition on display. There were paintings, ceramics, wood, steel, and glass works. 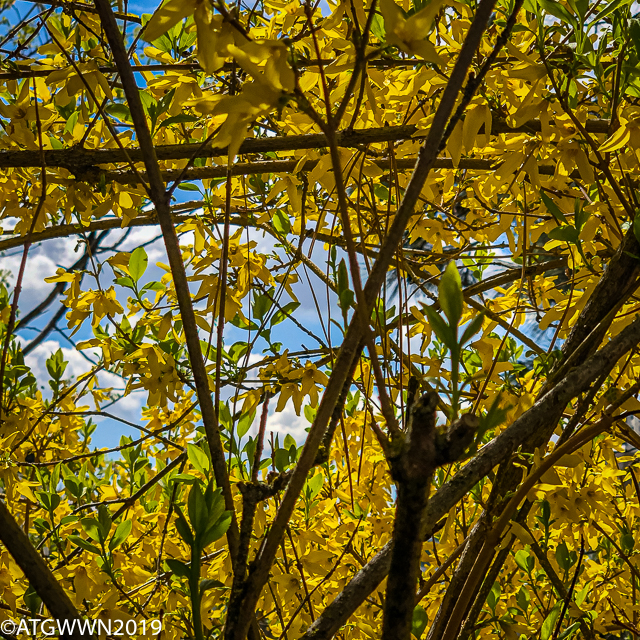 Forsythia, so glorious in spring, reverts to green for the rest of the summerThe development of this riverfront walk was not without controversy and continues to this day. In reading archives of the local Spokesman-Review, I found a connection with the Olmsted landscape architecture firm and Spokane’s great parks.

“Over several visits in 1907 and 1908, John Charles Olmsted (one of the sons of Fredrick Law Olmsted) and his associate, James Frederick Dawson, toured all over the city of Spokane — to the river gorge, to Manito Park, to Indian Canyon, to Corbin Park.

The two men did more than just take notes for their report. According to local historian John Fahey, Olmsted was paid an extra $50 to dispense as much verbal advice as he could give. Olmsted and Dawson went back to their offices in Brookline, Massachusetts and prepared a comprehensive report for what today seems an absurdly low price of $1,000. 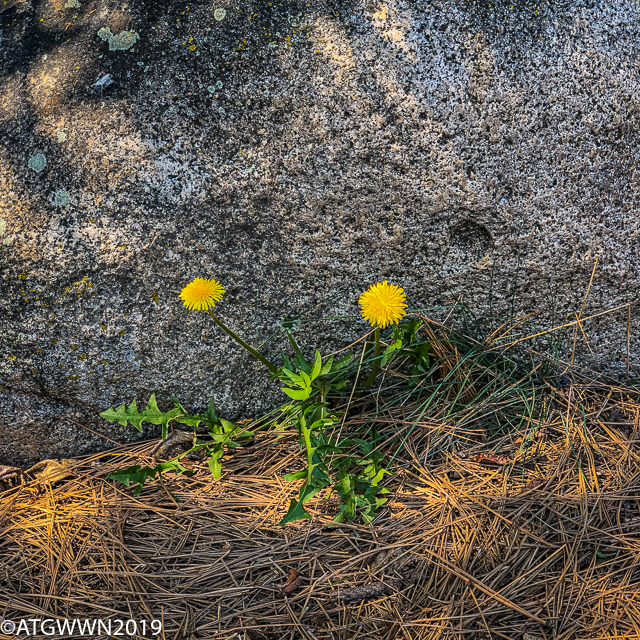 The report expressed the basics of the Olmsted philosophy, including several themes that are evident in Spokane today. First, they believed that every home, from humble to grand, should be within easy walking distance of a neighborhood park. Second, they believed that the more parks, the better. The Olmsteds believed that “city life … has a decidedly depressing effect on the general health and stamina” (Olmsted). The city dweller has to put up with noise, factories, crowds, and constant bustle. “Even to the well, this is tiring to the nerves,” said the report. “But to those who are delicate, it often becomes a torture. After all, it is to those whose nerves are tired — and they are a large proportion of the dwellers in a city — that the parks are most immediately beneficial” (Olmsted). They also believed that a great deal of parkland should be left natural and undeveloped, especially large parks on the edges of the city. The report said that large “reservations of country scenery” become more and more necessary as cities grow. Large, natural parks “offer inducements for the people to walk reasonable distances amid agreeable, nerve-resting surroundings” (Olmsted).” 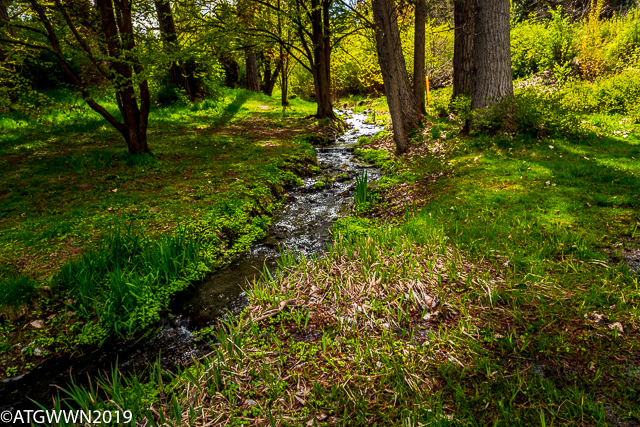 Spokane seems to have embraced Olmsted’s ideas of the importance of public green spaces to make a community more livable. In addition to the riverwalk, there is the 37-mile paved Spokane River Centennial Trail in Eastern Washington for alternate transportation and recreational use. It is managed by Washington State Parks as the Spokane River Centennial State Park Trail. (Wikipedia) It is a challenge that continues every day for communities around the world.  Will we choose to prioritize clean water, graceful trees under a clear blue sky, and beautiful gardens as essentials available for everyone?  In today’s stressful atmosphere where daily life can be a struggle, it seems to me our parks must be saved so they can save us.

*The Inland Empire Gardeners hold their premier event, the Garden Expo, the second Saturday of May and draws a crowd of thousands from all over the northwest. A plant and garden extravaganza They celebrated their 20th year this month with nearly 400 vendors participating.  The club organizes travel trips to visit gardens and nurseries, sponsors a garden tour each spring and offers a club library of garden books for check-out.   https://tieg.org 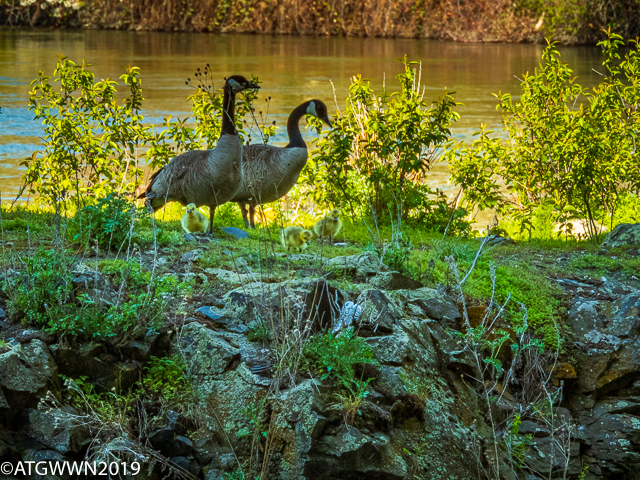 An artist-made fence with sculptural vignettes stretching more than 1,100 feet which runs parallel to the Centennial Trail behind the Spokane Convention Center. Vignettes include symbols of industry, the Great Spokane Fire, moose, and other Spokane stories. The owl, entitled You Elegant Fowl, sits south of the Spokane Convention Center adjacent to Spokane Falls Blvd.

12 thoughts on “A Walk Along Spokane River”