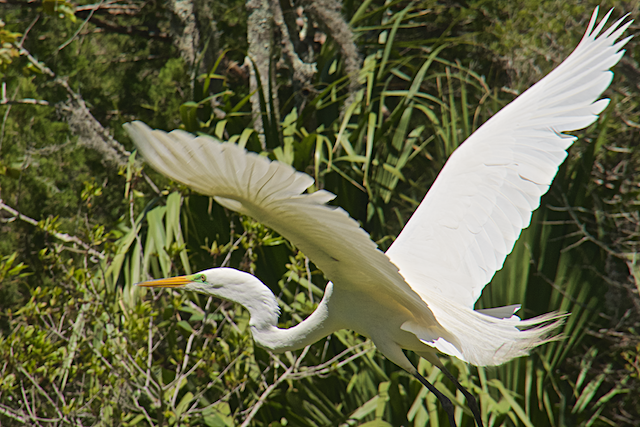 As an Arizona gardener I don’t deal with much mud and I don’t own a pair of rubber boots.  So I can’t imagine gardening in the low country of South Carolina, where there is water meandering  through the landscape nearly everywhere. Yet when I learned of the Audubon Swamp Garden, I knew I needed to wander through. I was assured by Christopher at the ticket window that we would be walking through on a raised wooden walkway, safe and protected from alligators.  After winding my way in the Swamp Garden for several hours on small board walks spanning the muddy places and navigating around the protruding tree roots I wasn’t sure Christopher had set foot in the garden.

There is a waterscape of cattails, water iris, swamp smartweed, water lilies, and stick tight sunflower. The water dominates and some is blue, some green.

The green water is covered in a plant called duckweed, which grows so uniformly it looks like a lawn.  There are Bald Cypress trees whose roots rise out of the water like knobby knees.  The knees are textured bark which ring round the tree.

Orange azaleas are growing among pink magnolia & dogwood trees. Palmetto trees, which look like Mexican fan palms to me though they are not, are tied to South Carolina history, (it is known as the Palmetto State, just check the license plate.) During the revolutionary war the trunks of the Palmettos were laid onto the sand walls of the fort on Sullivan’s Island and proved so strong it withstood the British cannonballs.

This Audubon Swamp Garden is a wildlife sanctuary. There are water birds, birds of prey, turtles, marsh rabbits, alligators, and bull frogs. I was told South Carolina has 42 varieties of snakes as well though I didn’t meet any.  At one point I thought to myself “why would anyone want to be around a swamp?” Then I realized that is exactly the point, the animals and birds are quite happy here and don’t need people, t-shirt shops or fast food restaurants.  The fast food is the fish in the water, the marsh rabbit babies (as many as 10 litters a year) snakes, insects, and the turtle eggs all available in abundance, creating a life cycle of amazing creatures with alligators always nearby.

In the spring the animals are mating.  The rookery was a flutter of White Ibis, Great Egrets, and Snowy Egrets.  The birds were flying in with sticks and reeds to build their nests.  They were fishing as they walked in the swamp.

The Great Egrets have a bright yellow bill, a green patch around the eye and plume feathers which they fluff out to dry.  Sitting in the tree with their feathers fluffed out, they could almost be mistaken for a huge spider web.

These beautiful feathers were once so popular for adorning women’s hats the birds nearly became extinct. There was a nest of downy Ibis youngsters venturing out on the branch to explore the world.

There are platforms designed for turtles and alligators to reenergize themselves by sunbathing.  In the day time the gator likes to lounge in the sun and the turtles climb up right along side of them. Our guide on the river tour at Magnolia Plantation and Garden says the alligator is at the top of the food chain; there is nothing their jaws can’t chew. The hard shell of the turtle is no problem for an alligator. Said gators eat mainly at night, and when they are full they don’t eat again until they are hungry (wow, alligators have mastered the thing we humans haven’t.) So what I want to know is, how does the turtle know when the alligator is going to be hungry?

It would help for desert gardeners like me to know that alligators are usually sluggish in the daytime and are not likely to be a danger if you leave them alone, unfortunately the garden doesn’t have a map and I didn’t see a sign along the path to assure me.

A Swamp Garden is a unique experience unlike any other garden I have visited. While I’d call this an unusual garden, I realize that Arizona gardens of cacti, succulents and the occasional rattlesnake may be seen as unusual by those in the Palmetto state. Once again I am reminded of the fun of wandering in  a garden every chance you get delighting in the surprises each new place offers.