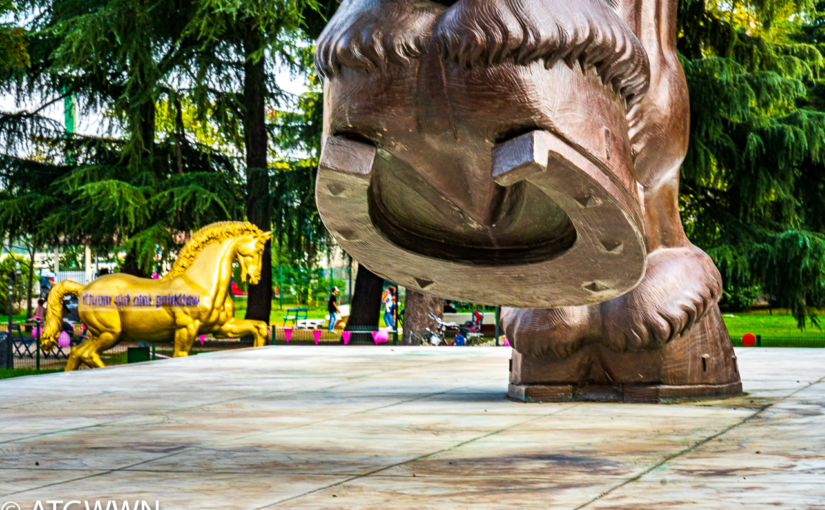 “The world is so filled with a number of things,
I’m sure we should all be as happy as kings.”
R.L. Stevenson 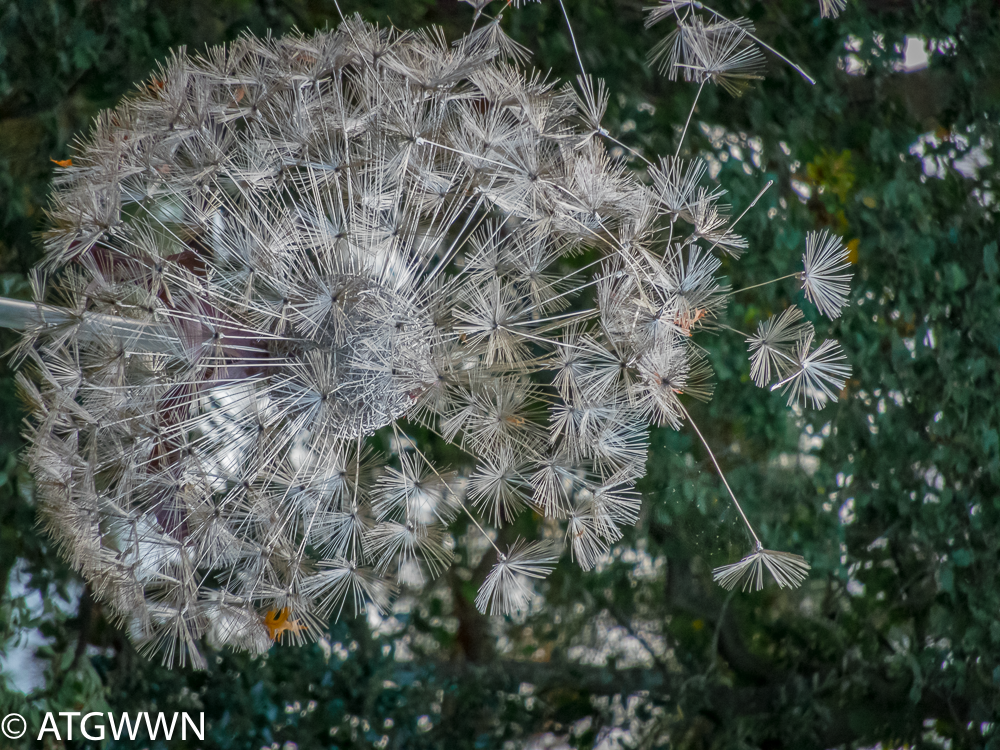 Wandering through gardens continues to make me very happy. The discoveries I make as I visit gardens lead me down a fascinating path. Meijer gardens in midland Michigan is filled with the most incredible things. The exquisitely designed landscape leads you through woodlands opening up to expansive views, on to ponds and waterfalls. This marvelous walk is punctuated with a sculpture collection so vast and varied it surely must please everyone who wanders in.

Before I visit gardens, I research what is unique about the place, and make a note of the must-see high points in the garden. Sometimes I go because someone tells me “you need to see…” which is how I arrived at Meijer. Yet, I did not know about the sculpture, The American Horse.

When I first glimpsed this artwork, I was stunned. Stunned to the degree where you stop moving.  Just stop. Just stare, and your jaw drops. This bronze horse is enormous, 24 feet high. It is so realistic you expect it to move, to stomp the ground, to snort the air, and swish his tail. 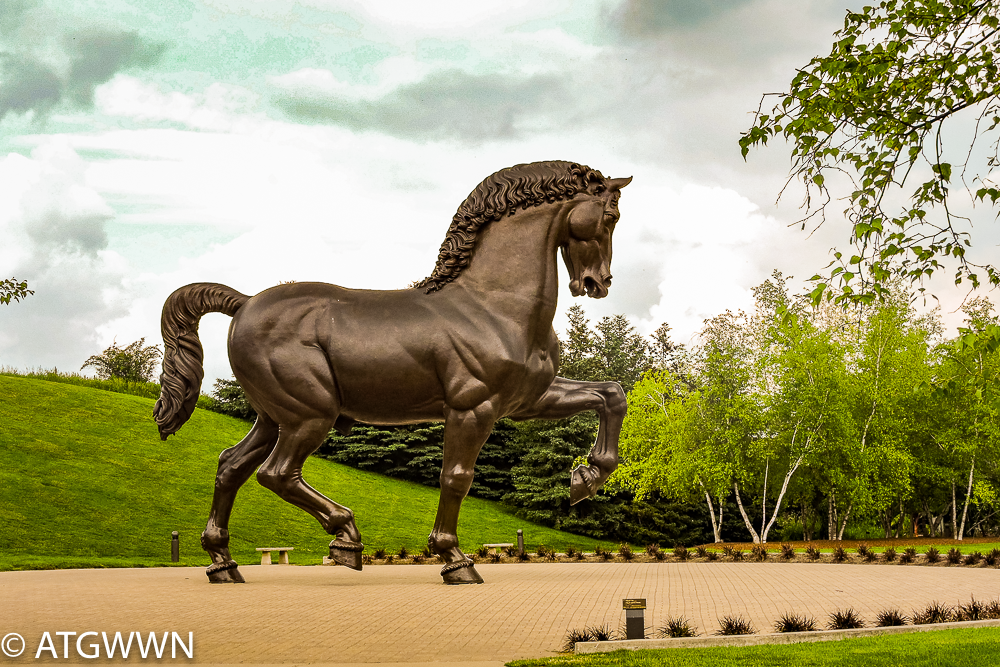 In Meijer Garden & Sculpture Park, The American Horse has pride of place. Displayed in a staging area surrounded by rolling green hills, nothing distracts from its beauty. You may walk directly into this space, stand under the raised hoof, and look up in awe at the rippling muscles in the shoulder of the raised leg. The nostrils flared, the eyes stare down, the tail raised, the body tense, this horse is ready to run.

We had the luxury of time to stay in its presence. We were there alone, to truly feel the power of such a work. The questions bubbled out. Who did this? How did this come about? How could you make this enormous work? Why didn’t I know about it before today? The answers I found displayed nearby and learned there is an entire book retelling the story of The American Horse. 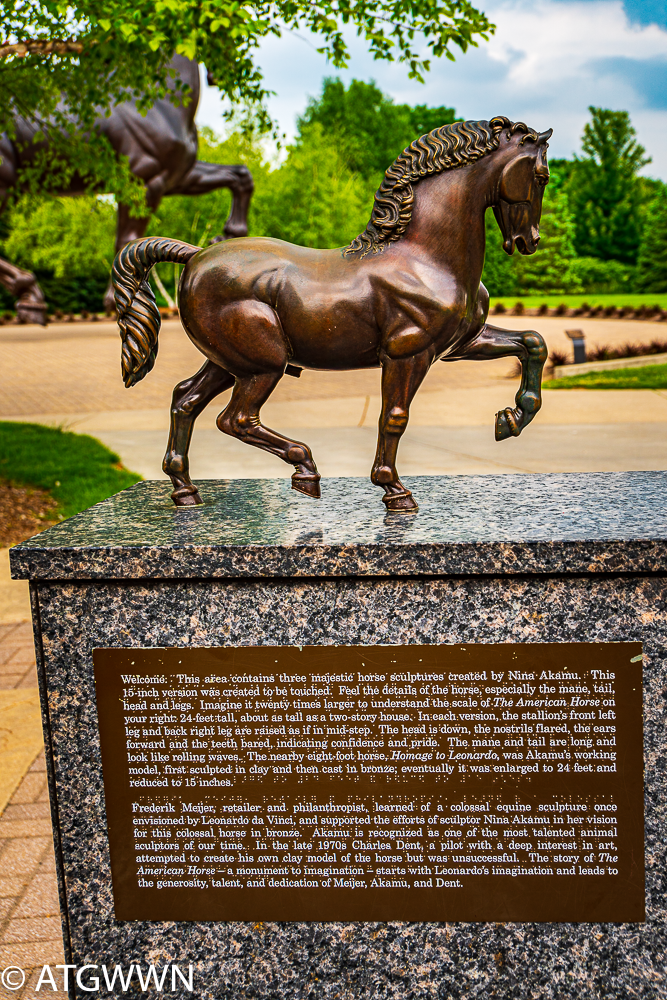 The design is Leonardo de Vinci’s. He was commissioned by the Duke of Milan in 1482 to create the largest equestrian sculpture in the world to honor the Duke’s father. Leonardo made a clay model to size and placed an order for the quantity of bronze needed to make the final casting. While waiting for the bronze to arrive, Leonardo painted The Last Supper. The Duke went to fight the French. When the bronze arrived, it was redirected from artwork to war work. The French soldiers invaded Milan and destroyed the clay model with their arrows. 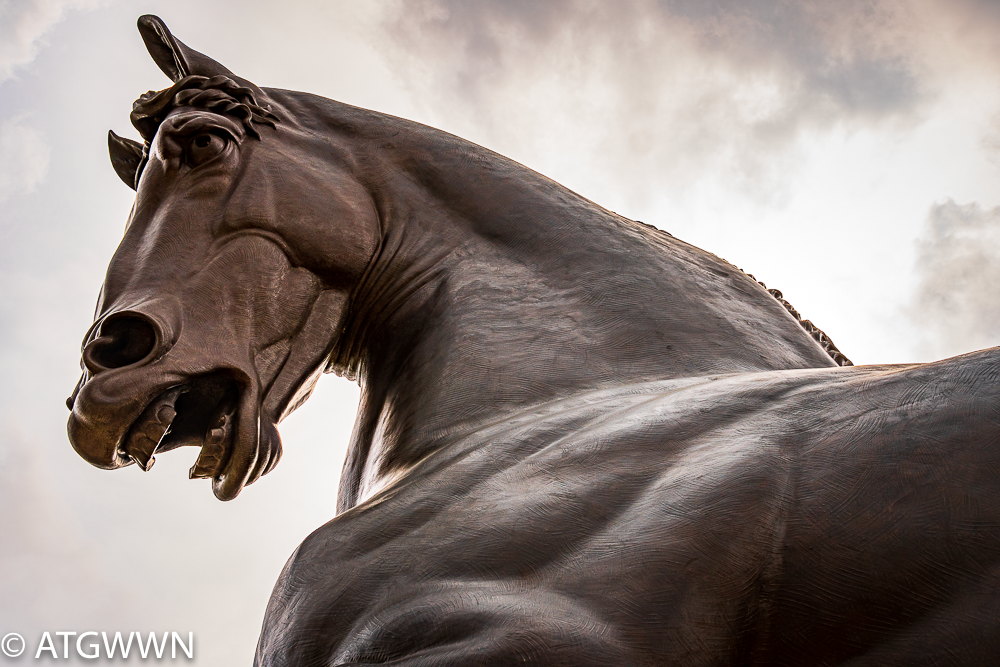 The grand equestrian sculpture was never made. It is written Leonardo mourned the loss of his Il Cavallo until the day he died.

The plans languished from the late 15th century until the late 20th century when Charles Dent, a retired pilot, art lover, and wealthy dreamer from Philadelphia, read about Leonardo’s Horse in a 1977 National Geographic article. Dent decided he would make Il Cavallo, Leonardo’s Horse, a reality. 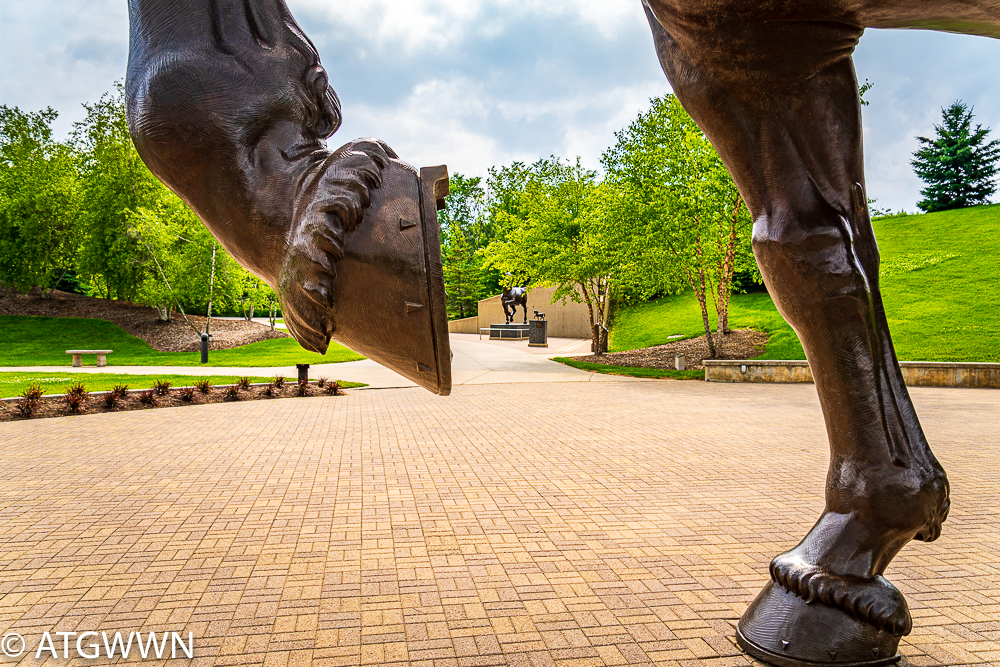 The effort to complete this involved forming “Leonardo da Vinci’s Horse, Inc. (LDVHI) in 1982. The organization’s stated purposes were to honor the Italian Renaissance and its immense cultural, artistic, and scientific legacy; to honor Leonardo da Vinci and his extraordinary genius; to honor the noble horse, man’s companion throughout history; to encourage curiosity, imagination, and creativity among youth; and to stand as a symbol of friendship between nations.” (DaVinci Science Center.) 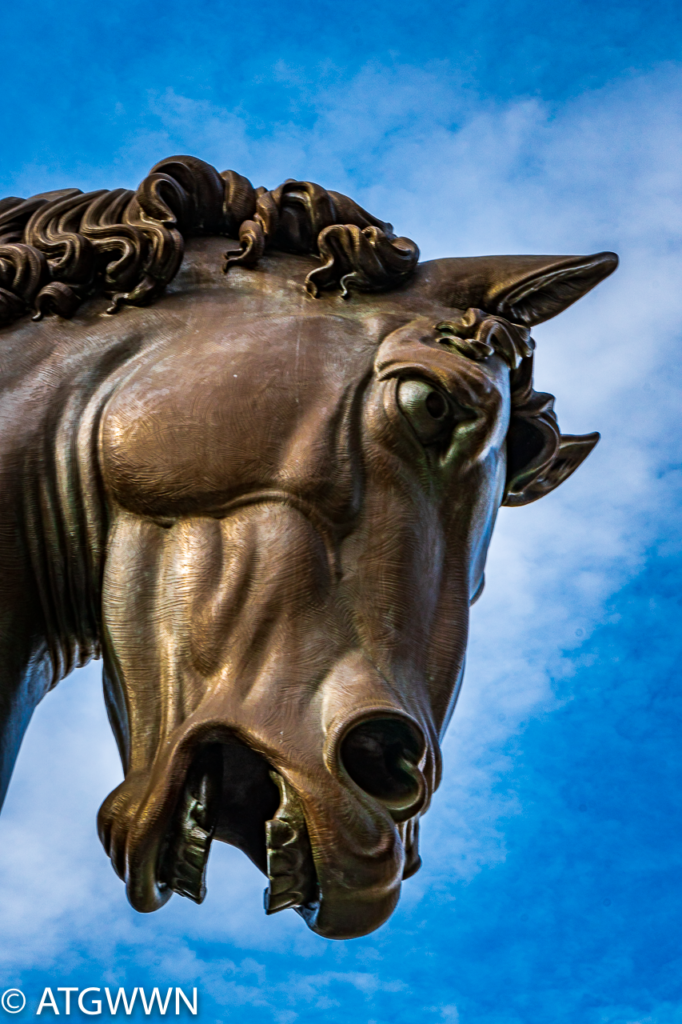 Dent died in 1994 before the project was complete. Fredrick Meijer stepped in to continue the funding for the American Horse sculpture. Meijer “sought to support cultural projects that could stir the imagination…celebrate centuries of creativity since Leonardo’s unfinished project” (Display signage) and this is how it came to be in his Sculpture Garden.  Two 24′ sculptures would be made, one a gift to the city of Milan and the other for his garden.

The sculptor of record is Nina Akamu, a renowned American animal sculptor, and a woman! It was she who poured over all available sketches, notes, documents to finalize the dimensions. It was she who did the calculations and necessary adjustments to create and cast this magnificent piece. After her intensive design work, “seven assistant sculptors were hired to transfer precise measurements from the finished model to the 2 ½ story rough clay enlargement. The creation of the life-sized clay model, the clay enlargement, and the finished bronzes within the foundry took almost three years and involved approximately 60 artisans.” (Nina Akamu website)

Leonardo’s Horse, as the Italian version is named, was put in place on September 10, 1999, in front of the Hippodrome (horse racetrack) in Milan. It stands on a 4′ pedestal of Carrara marble so that it is taller than the American version. It was a long treck by Metro and foot to get to this location.  The American Horse came to Meijer Sculpture Park in October 1999. These are the only two 24′ statues.

In Charles Dent’s honor, a 12’ model is in his hometown, Allentown, PA. There is a 12′ model in Sheridan, Wyoming. There are other smaller copies in museum collections. It might be easy to overlook a 4′ model, but if you are ever in the presence of the 24′ (7.3m) statue, you won’t be able to miss it. 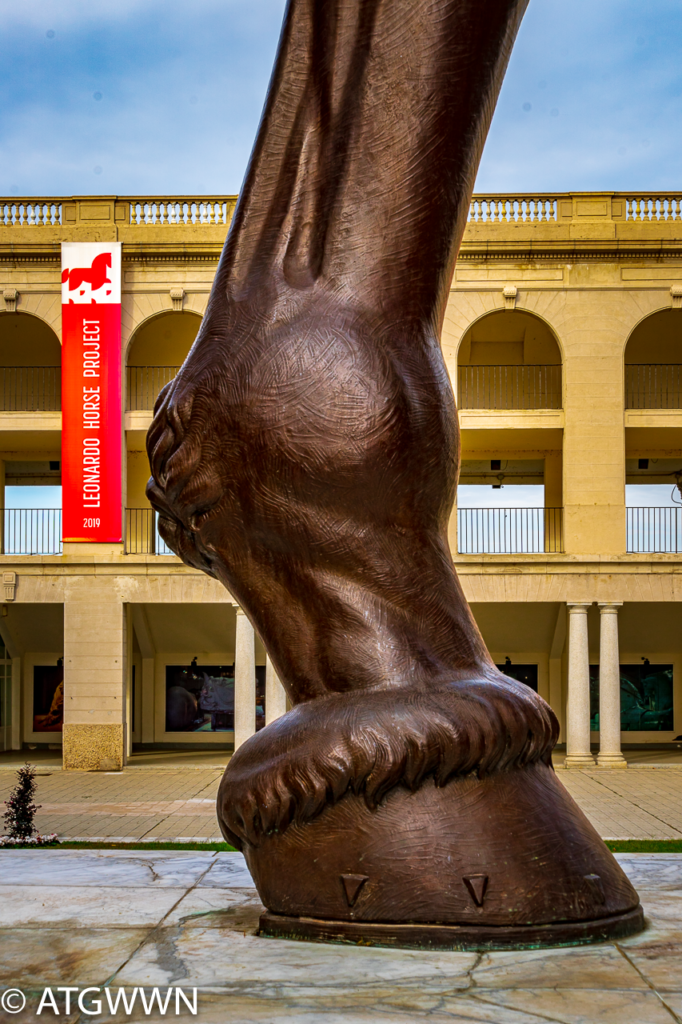 Seeing both of these is quite a thrill. Much has been written about Leonardo da Vinci. He was a genius admired for his scientific and artistic abilities, his designs, his work in so many mediums, drawing, carving marble, painting, and building. Each year millions stand in line to view the Mona Lisa, David, and The Last Supper. We’ve seen two of those famous three, but now that we have seen his Il Cavallo, it is an incredible thing and seeing it makes me happy. 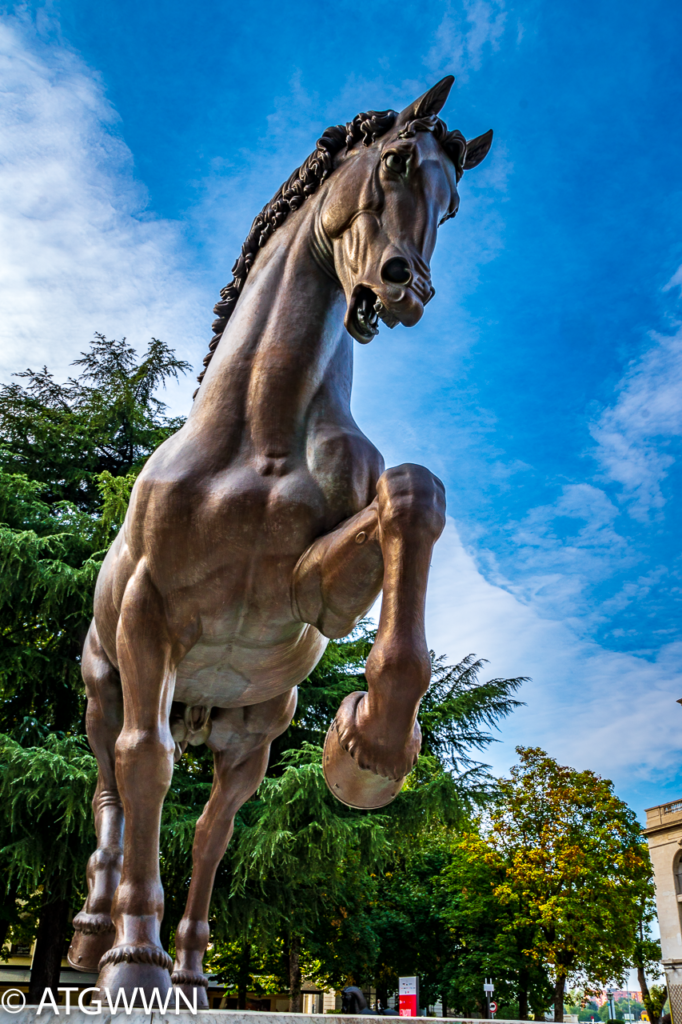