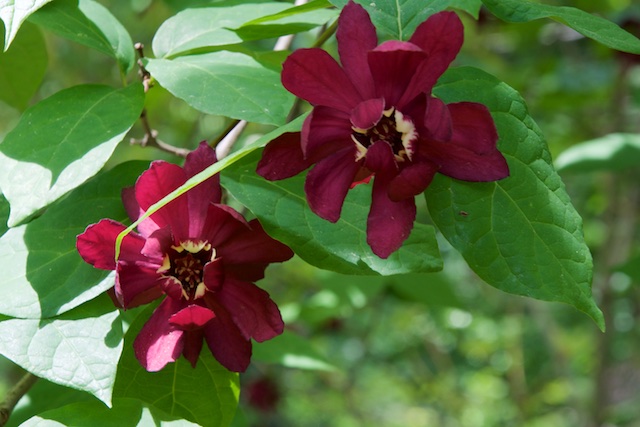 Philadelphia is known as the City of Brotherly Love, and for the men who gathered there to lay out the foundations of our democracy.  This is where the Declaration of Independence was signed and the Constitution written. What many people don’t realize is that Philadelphia also claims to be America’s garden capital, boasting 30 public gardens within 30 miles of Philly.

The first one listed is Bartam’s Garden described as America’s oldest living botanic garden. John Bartram was born into a Quaker family in Philadelphia in 1699.  Bartram loved plants and he was insatiably curious about everything which grew around his home and beyond. John Bartram was first of all a farmer and he needed seeds to grow crops and food.

Visiting Bartram’s garden today is a pleasant walk with a view of the city across the Schuylkill river. The elegant gray stone house still stands on a 45 acre green oasis recognized as a National Historic Landmark. You may wander among mature trees and shrubs he planted there.  I visited Bartram’s after seeing Longwood, Chanticleer and Winterthur gardens, clearly three of the best gardens on the East coast.  Bartram’s doesn’t have the fabulous look of these prominent pleasure gardens.  Yet it represents the working garden of two passionate plantsmen, Bartram and Collinson, that collaborated to make all our gardens more beautiful. Their efforts focused on flowers, shrubs and trees.

Peter Collinson was just six years older than Bartram, a London Quaker and a prosperous woolen merchant.  He too loved plants. Collinson traded extensively with the colonies and would plead with his trading partners to send back seeds or roots from the native plants.

Andrea Wulf’s “The Brother Gardeners” tells a story of these two men corresponding and shipping plants and seeds across the Atlantic Ocean for over four decades. During the 1700’s this horticultural collaboration had a profound effect on England’s gardens.  Until I learned of Bartram’s work I did not realize England wanted plants from the colonies.  England’s forests had been cleared for the building of ships and needed to be replanted. The American sycamore, the tulip poplar and multiple varieties of conifers were eagerly sought after.  The Virginia sunflowers, asters, lady slipper orchids, goldenrod, rudbeckia, flowering dogwood, horse chestnuts, magnolias, rhododendrons and many more were exported to England, adding color to their predominately green landscape.

The English country garden as we know it today wouldn’t  exist without these beautiful flowers and plants exported by John Bartram.

Exporting plants across the Atlantic in the 1700’s was nothing like our nursery shopping experiences today. Bartram began by sending seeds and roots to Collinson, but the names of the plants were often nonexistent.  There were no images or descriptions of the plant’s growing behaviors.  Before a naming system, before illustrations, before seeing a plant, a gardener would have no idea what might grow.  Sailing times could last from five to 12 weeks and plant specimens rarely survived the journey. When seeds and roots were packed together the roots often spoiled the seeds.  Mice & rats from the ship would nest and nibble in the boxes of plant materials. So a system had to be devised.

“Collinson’s solution was simple: when sending a particular seed, Bartram should press two examples of the plant, dry them for two weeks, then mount each on a separate piece of paper, both numbered the same. One set of dried specimens should be sent to England, where Collinson had arranged for the most eminent botanists to classify them, while the duplicates with the corresponding numbers should be retained by Bartram until Collinson next wrote with the relevant names. Cross-referencing the numbers, the farmer could then learn the names himself and Collinson could easily reorder from these lists. This way, they established an efficient system which would function much like a mail order catalogue, as well as serving as a useful learning tool for Bartram.” (The Brother Gardeners)

With this system established Bertram worked to find new plants.  It was his joy and passion to discover a plant.  He would ride off, leaving the farming to his wife and children. He would climb to the tops of trees to gather seeds, he would dig roots and carry them back. He would grow the new plants in his garden in order to generate specimens to export. He once rode for five weeks covering 1100 miles on horseback collecting specimens, only to discover the packets of seeds he so careful organized had been jostled to disaster by the time he arrived home. But his enthusiasm never lessened.

He sent boxes of seeds and plants with notes and dried specimens.  Collinson in return would send compensation in funds, cloth and best of all, botanical books, as they became available.  Collinson also found more customers for Bartram’s exports.   Historian Andrea Wulf poured over the correspondence of these two men, discovering their enthusiasm and excitement of working with plants.

Their collaboration changed our gardens profoundly.  Bartram worked tirelessly to provide the appropriate growing conditions for plants he collected from climates quite different from his farm such as Georgia, or the Carolinas, creating a collection of specimens available for viewing in one place.  He made it possible for others to see the variety and beauty of plants growing in this new country.  Peter Collinson distributed the plants to others in England allowing them to see a part of the colonies. Over the years Bartram’s garden became a botanical garden and arboretum.

George Washington, Thomas Jefferson and Benjamin Franklin were all customers of Bartram’s.

In Andrea Wulf’s book “Founding Gardeners” she writes of the deadlock of the Philadelphia constitutional convention of 1787.  Needing to revise the Articles of Confederation it was a point of compromise or collapse for this new country.  Weeks of deadlock passed without much progress. Delegate & Botanist, Manasseh Cutler suggested an outing to John Bartram’s garden. On Saturday morning, July 14, a group of delegates made the trip to what was now Bartram’s Nursery and Garden run by John Bartram’s sons.  For over three hours the men wandered through trees and plants collected from all 13 colonies in the decades before the country declared independence.  Wulf writes, “In Bartram’s Garden, the delegates could see how the manifold flora of each state thrived together their branches intertwined in a flourishing horticultural union.”

The following Monday when the delegates reassembled a vote was taken and the Connecticut compromise was reached to reform the structure of the nation.  Wulf writes “It can only be speculation that a three-hour walk on a cool summer morning among the United States of America’s most glorious trees and shrubs influenced these men.  But what we do know is that the three men that changed sides and made the Great Compromise possible that day had all been there and marveled at what they saw.”

In learning this horticultural history, I must say I walk a little prouder through our American gardens.  Our plants are an export of great beauty and value appreciated by gardeners in many countries. This happened in large part because of the passion and curiosity of John Bartram. Yet the English were amazingly passionate about gardening and Peter Collinson supported the trade of plants. What English gardeners did with these American plants still influence our gardens.  Gardeners then and now collaborate and the more ideas of design and points of view make all gardens better.

What if John Bartram’s garden of assembled plants from throughout the 13 colonies, growing together in harmonious beauty influenced the direction of our country’s foundation?  It is a testament to the power and influence of gardens throughout history.   I wonder what might happen if our current political leaders did some gardening?

Be sure to celebrate your garden on the 4th of July!

One thought on “An American Garden”