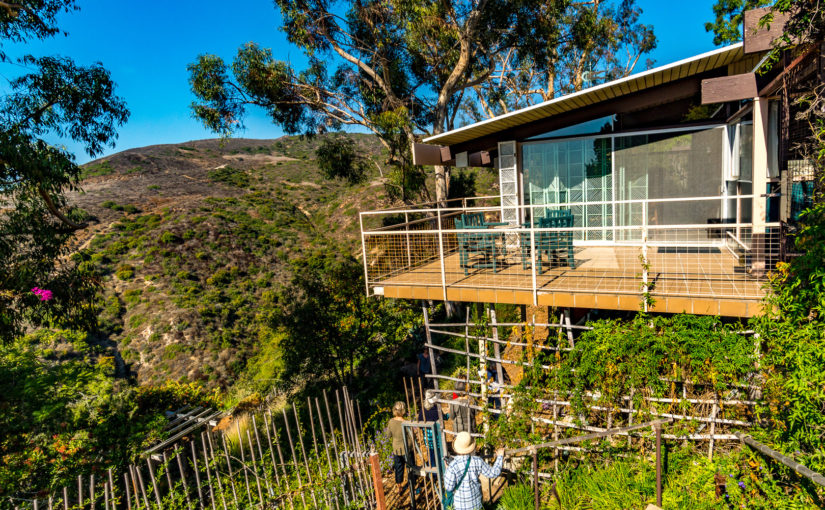 On a steep hillside of Boat Canyon overlooking artistic town of Laguna Beach and the Pacific Ocean is the two and a half-acre garden of Hortense Miller.  I’ve never met a person named Hortense, but if you are given such a name, the derivative of which is Hortus as in garden, it seems likely you would love a garden.  Hortense experienced a magical moment when she was five years old and her kindergarten teacher took the class on a walk “to look over a picket fence into the neglected front yard of an empty house. Thousands of dandelions had opened in the sunshine, standing knee-high in long grass”* and the glory of that moment influenced her for the rest of her life. By age 12 she declared she would: Never eat animals, never marry, and never have children.

I believe I would have liked Hortense Miller. She loved plants, was intensely curious, extremely independent and a scientific observer. Reading her book, The Garden Writings of Hortense Miller, I find myself fascinated by her description of planting California wildflowers, searching for the right place for a new plant in her garden, laughing at her trapping of a skunk and her garden encounters of 22 rattlesnakes over a period of 20 years. The book is a series of essays she wrote for the Friends of Hortense Miller Garden newsletter for ten years.  She wrote of the scientific, historical, and horticultural experiences in her garden and the evolution of the surrounding land of Boat Canyon. She wrote a garden blog before blogging existed.

Behind every garden is a gardener, and the story of both of these remarkable elements is part of the joy you discover as you explore this steep hillside garden on a docent-led tour. I was fascinated by the person, her approach to gardening, and by the variety of plants she nurtured in a challenging environment. She began seriously gardening at 50 and worked on it daily until late into her 90’s, “a day I can’t go outdoors is a day lost” (LATimes.)  In 1976 she bequeathed her garden to the town of Laguna Beach and the Friends of Hortense Miller Garden was formed. Martha Bode has led this group for over 15 years.  She writes of first meeting Hortense in 1990 as a docent in training.  That day Hortense decided she needed to trim the vines growing onto the roof, so nimble and vigorous “she carried a ladder from behind the carport, flung it up against the bedroom wall and scampered up on the roof top to show me where to cut.” Hortense died in 2008 just a few weeks short of her 100th birthday.

Hortense kept two of her childhood vows, but she did marry Oscar Miller in 1942. They had been companions for some time but as a teacher, she was not allowed to marry.  She enjoyed teaching science very much, but when the St. Louis School District closed the small school she was teaching in, moved her to a much larger school and gave her 50 students in her classroom, she found it unbearable and left teaching. (oddly similar to what we see today.)  She and Oscar began traveling the world visiting gardens wherever they went.  It was during her travels to Mexico that she fell in love with bougainvillea cascading over a wall, outlined with a bright blue sky behind.  She decided California was where they should live so she could become “a mother of a bougainvillea.”

Her informal garden is not an ”outdoor living room,” it is in Hortense’s words, “a garden planted to please one person who liked plants.”  The garden surrounded the house she and her husband Oscar built in 1959. She wanted two things in the design of the mid-century modern single story home; a view of the garden from every window, and open spaces for painting murals. Sadly, Oscar died shortly after they moved in.

Her piece of ground gave her an ocean view, a steep terrain of scrub brush, and wildlife for neighbors.  She learned to compromise her visions of profuse blooms with the reality of a dry climate and the soil that came with it. For the next 25 years, she designed her garden working outward and downward building pathways, handrails, fences, and a watering system.  She hired a gardener who worked one day a week. She dealt with hungry deer, bobcats, snakes, cows, lizards, raccoons, and skunks.  She saw them as part of the garden, because “A garden without animals is like a florist’s refrigerator.” (From her article in Fine Gardening Magazine.)

She embraced the California natives and added Mediterranean plants and exotics from around the world.  She grew wild roses, poppies, heather, succulents, trees and some 1500 species of plants in all. She loved vines and at one point counted 43 climbers, leaners, and hanger vines. 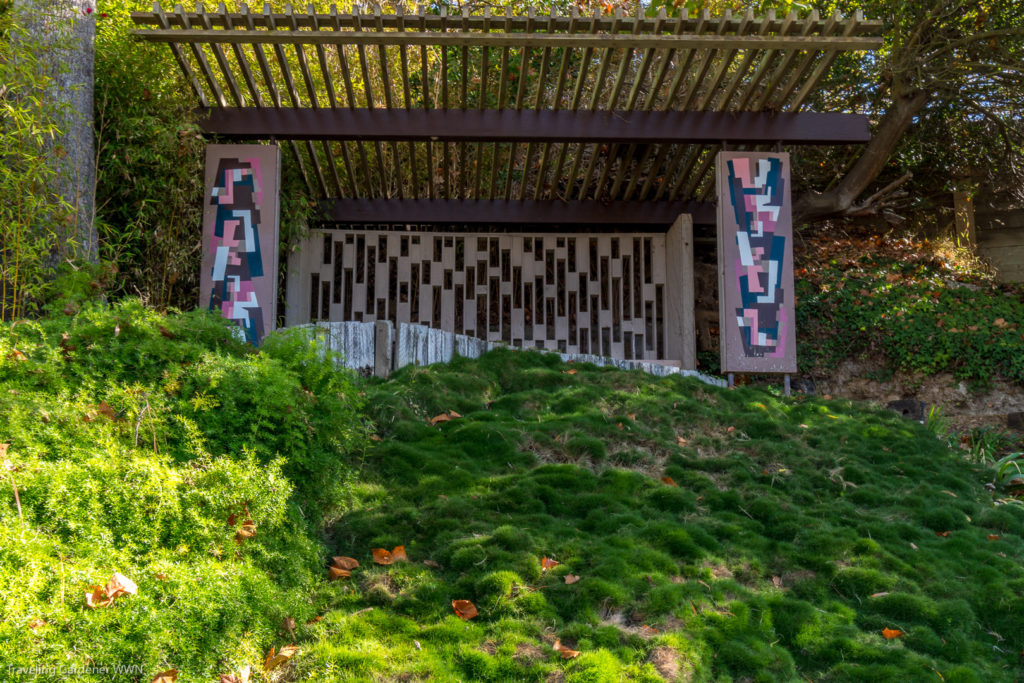 In December 1979, a wildfire burned Boat Canyon and raced toward the house and garden. Hortense watched the rolling fire heading her way. The house and much of the garden survived.  But that was not all nature threw her way that year. Two months after the fire the canyon received 16.5” of rain. Undeterred she continued gardening, observing the transformation of the landscape in great detail. Her essays record the rebirth of the hillside over the following years. She noted the year after the fire was the best year for annuals.  Seeds that lay dormant for years sprouted and covered the canyon in color. 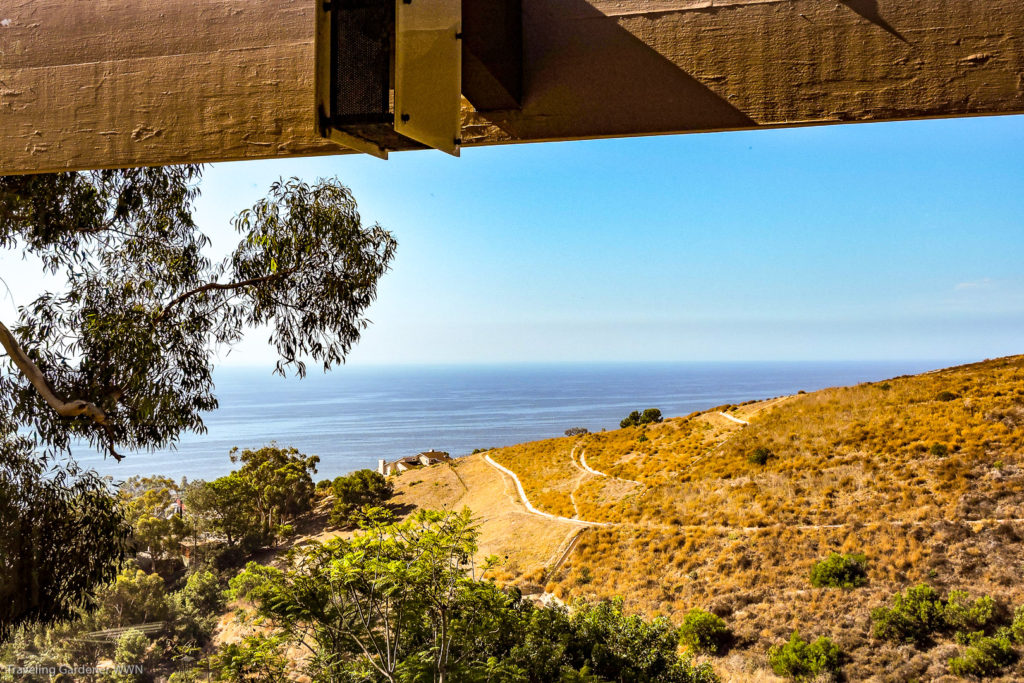 I visited this garden in November of 2017 and the surrounding hillside of Boat Canyon looked bare, with some green, but appeared mostly dry and dead from the current drought, though I am inexperienced in knowing what the canyon flora should look like.  But just the terrain was so steep and open it made quite an impression. Not long after in December 2017 wide swaths of CA hillsides began burning. I cannot imagine how anyone hopes to fight and contain wildfires that race along the steep hillsides. Somehow firefighters dig in and save everything they can.

After the landscape is burned how does one rebuild, replant, and resolve to wait for regrowth? People do, and Hortense did as well.  Happily, this garden and the story of this remarkable gardener remains available to us. 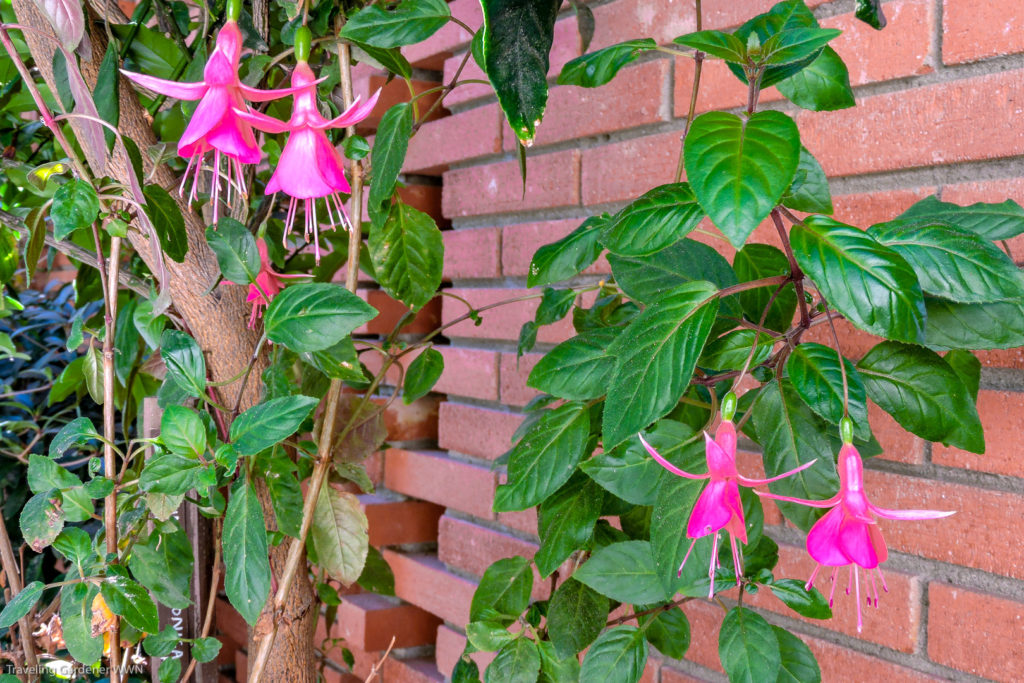 The City of Laguna works with the Friends of the Hortense Miller Garden Foundation to maintain this garden.  Docents provide tours and insights into the life of this self-taught artist, trained science teacher, and world traveler. Reservations required.

This Is Not Just Any Plot : Gardener Shares Laguna Oasis in Her National Writing Debut December 26, 1992|Sharon Cohoon, LATimes

THE SUNDAY PROFILE : Tough Row to Hoe : Independent and outspoken Hortense Miller, who has been gardening on a rugged Laguna Beach hillside since 1959, wonders who will reap what she has sown when she no longer can. July 24, 1994|Dennis McLellan | LA Times

12 thoughts on “Hortense had a garden”