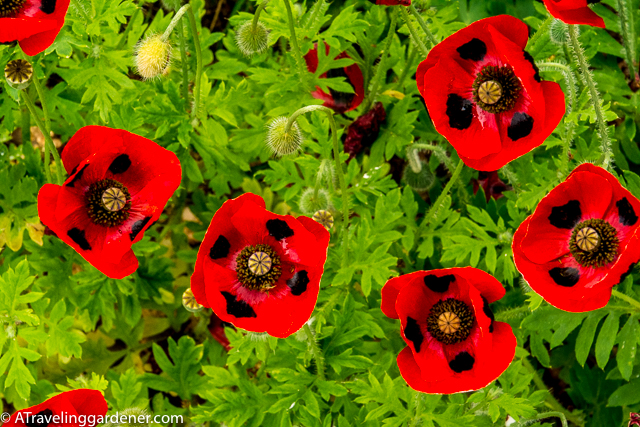 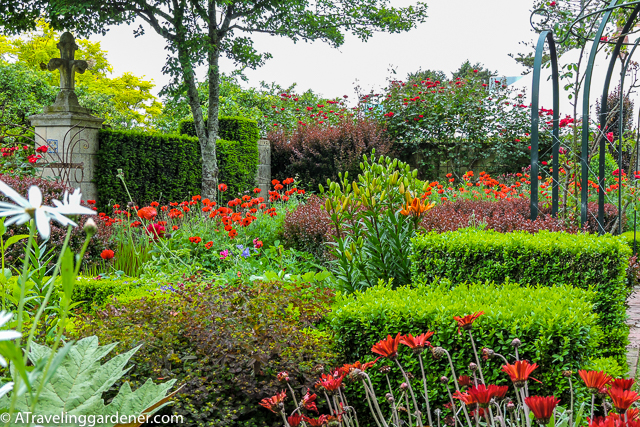 We drove to Governor’s Bay, through the harbor town of Lyttleton, the actual epicenter of the 2010-2011 great earthquake which was generally known as the Christchurch quake.  Just beyond the Governor’s Bay Hotel is Ohinetahi.  Can’t figure out how to pronounce that?  Neither could I, however, the resident, creator, architect and gardener Sir Miles Warren told me.  Divide it into five syllables, O-hen-E-Ta-HE.   Sir Miles is a well-known architect, he designed the New Zealand Embassy in Washington, D.C. to note just one of his projects.

I came away with an autographed copy of Ohinetahi, Garden, House and Art, to read for more research but in the short term, I will share with you just one part of this incredible place.  The walled red garden. 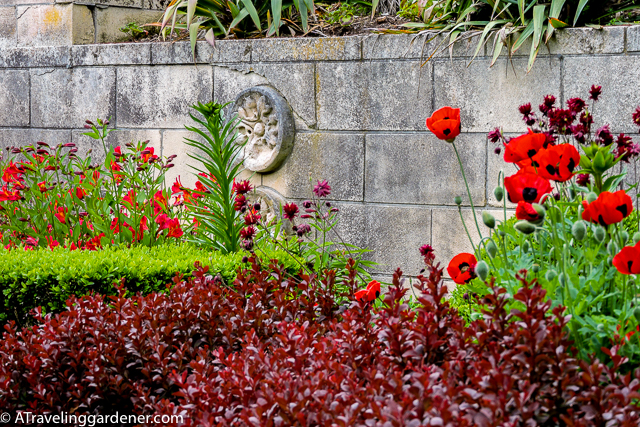 The day I visited, Nov 24, late spring on the south island of NZ it was full of color.  The boxwood parterres were brilliant green, the red “boxwood” (Berberis thumbergii) the red poppies, red roses, red dianthus were all in in shades of red. 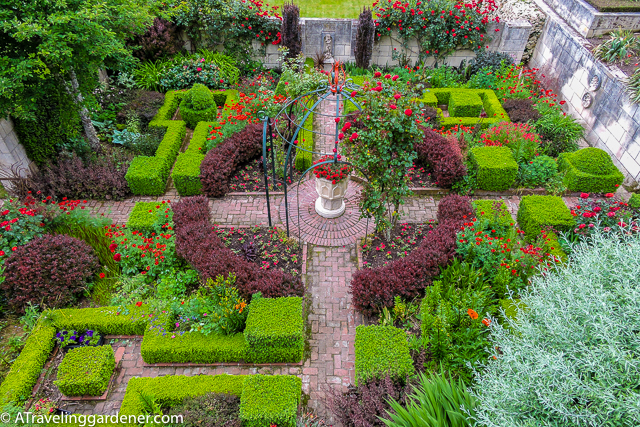 Some white blooms were mixed in to add to the drama. The garden has a lookout tower which we were encouraged to climb to see the symmetry of the small garden. 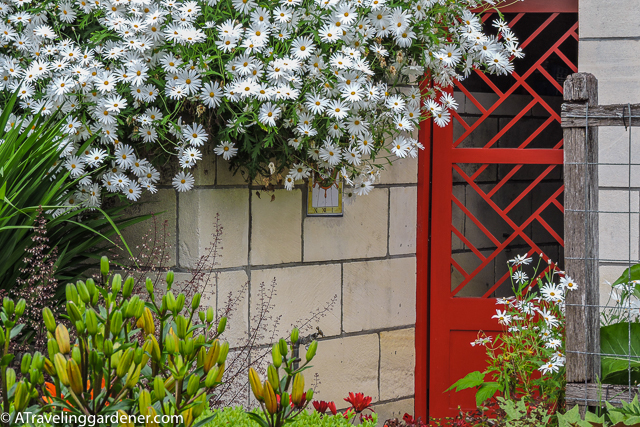 A red sculpture hung from the supporting beam, a red door accented the base. It is brilliant. 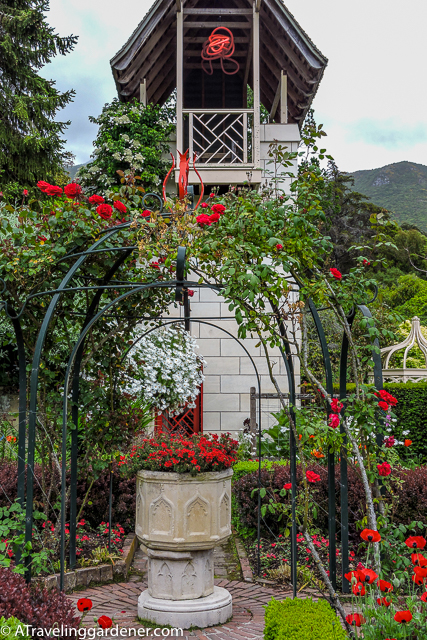 Sir Miles is a creative, generous gardener and a few years ago he established a trust to fund the garden and its care for the foreseeable future.  He then gifted then entire estate to New Zealand. There are many wealthy individuals in this world and occasionally they make a beautiful garden out of passion and love of growing things.  This is one of those gardens. 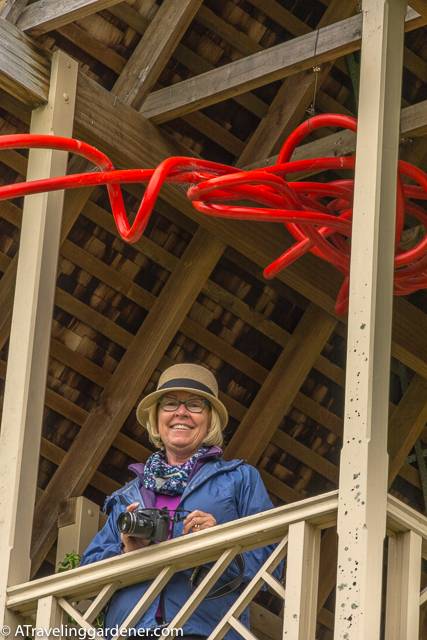 Sir Miles still lives in the house and gardens, I saw him early in our visit bringing in a load of clippings to the compost chipper. He had a trowel in his hand and he waved and smiled. 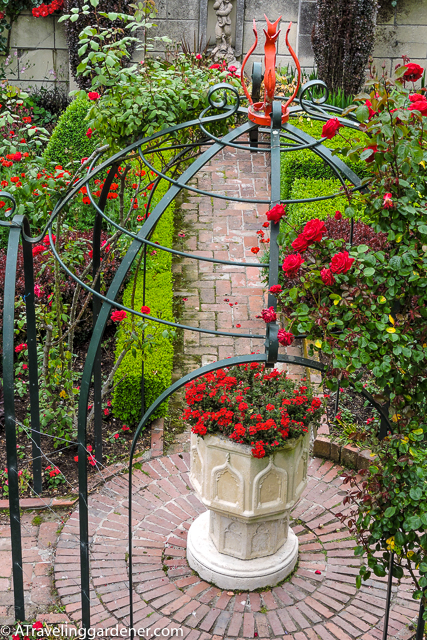 Ross, the resident builder and Mark the head gardener talked with us throughout our visit, explaining, guiding and sharing all kinds of wonderful stories about this special place. Mark relayed the story, saying that Sir Miles, was in the house at the garden when the great earthquake hit. He “heard a crash, a bit of a crash” and he picked up his torch, (flashlight) to survey the damage, on either side of the site where he picked up his torch, the third story of the house had fallen down onto the first floor. 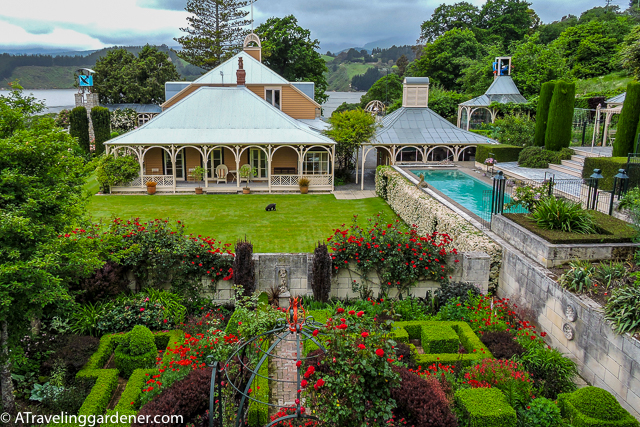 From the lookout tower you get a fabulous view of the house, the pool, and the beginnings of the long perennial border. Then you simply must walkabout and explore every beautiful inch. The garden receives about 6-8 visitors a day. We were there first, three other couples came and went within that time.  I didn’t want to leave ever.  If you go to New Zealand, to Christchurch on the South Island, go see this garden. 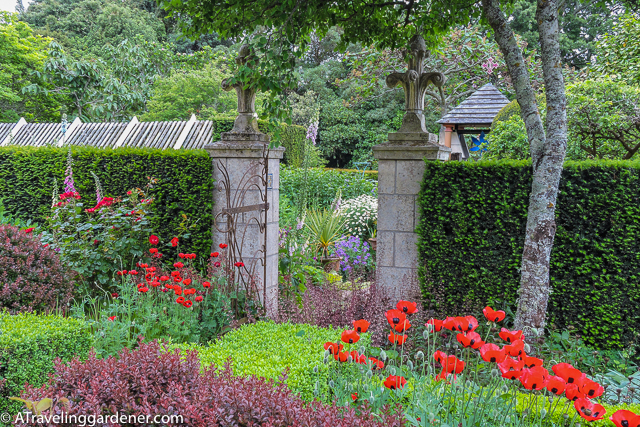