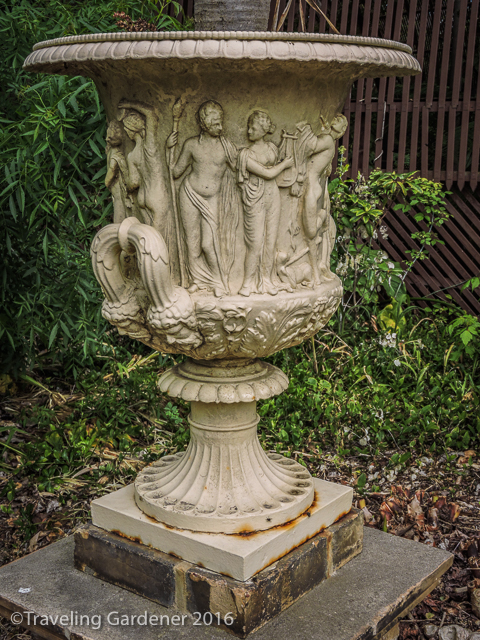 My local PBS station is promoting a new Australian series in the fall lineup, Miss Fisher’s Murder Mysteries set in 1920’s Melbourne. Miss Phryne (Fry-nee) Fisher returns from England after serving in the hospital corps in WW1.  Phryne, an independently wealthy, independently spirited, glamorous lady detective speaks multiple languages and seems to have an encyclopedic knowledge of everything. I find period dramas remain endlessly fascinating as the characters recreate the dress, manners, and behaviors of another time as the setting reinforces the story.

I watched this series before traveling to Australia and with some research I discovered Rippon Lea, a historical house and garden now owned by the National Trust of Australia. In the series, Miss Fisher’s Aunt Prudence lives at Rippon Lea. In one episode Miss Fisher discovers a leaf in a suspect’s office and she knows immediately to go to the estate’s fernery in search of a lemon button fern. (She is helped by the lemon scent and the round small leaf)  Of course the murder weapon is hidden behind the fern.

Walking through the house, gardens and magnificent iron frame fernery just as Miss Fisher did connected me with fiction and fantasy, just one of the delightful ways to enjoy time spent in such a beautiful setting.

Rippon Lea was the family home of Fredrick Sargood, a former London dry goods merchant, and avid gardener.  Once he achieved success in his adoptive country he purchased 23 acres of scrubby flat ground on the edge of town. Rippon was the family name of his wife and Lea is an old English word for meadow. His vision was to create a self-sufficient family home with “a brilliant and productive garden.”  While Sargood was a successful business man he was greatly intrigued by all aspects of engineering developing in the late 1800’s. He planned the estate to include the best technology of the time and irrigation was critical for supporting the garden and productive grounds he desired.  It is suggested that Sargood designed the original garden.  He was an active member of the “Acclimazation Society” a group engaged in importing thousands of plants determined to be adaptable to the Australian Climate. The English garden influence truly circled the globe.  In time Sargood’s garden became a remarkable destination.

Sargood designed his garden to include a grand lawn providing open space suitable for entertaining. While lawns today are falling out of favor in certain climates, it is important to recognize the value of a lawn as an open space for activity. Here was space for lawn tennis, bowling, croquet, and archery.  He regularly entertained friends and his employees at his home and was known for dinners and parties that accommodated 500 guests.

Sargood’s engineering ideas for water provided for a lake to hold water reserves with windmills to pump the water through underground lines. At the high end of the lake was a lookout tower and waterfall. A boat house held small rowing boats used for leisurely boating on splendid afternoons. This design allowed for a dairy, stables, a vegetable garden, fruit trees, flowering shrubs, and cutting gardens. Sargood employed seven gardeners.  So consumed with his plans for his estate he began and ended his days walking the grounds with the head gardener. He walked with an eye for details, making notes, seeking to improve and maintain what he considered his greatest achievement.

Today the 14-acre garden includes the large front lawn, surrounded by mature oaks, Morton Bay figs, Monterey cypress and elm trees, a lake, the fernery, the flower gardens and grotto.  80% of the watering needed is still served by the original engineering done by Fredrick Sargood.

The family home filled with eleven children was designed by a prominent architectural firm known at the time in Melbourne. The polychrome brick exterior of red, cream and brown colors, created a patterned emphasis of the architecture.  A conservatory attached to the home held a collection of orchids and exotic plants.

The iron framed shade house or “fernery,” where Miss Fisher finds the murder weapon, was a great point of pride in Victorian gardens. Victorians were fascinated to the point of mania with ferns. Built to house an enormous collection of ferns and palms from all over the world, it is complete with a trickling stream flowing alongside walking paths and benches where one could relax in the cool air and admire the exotic plants.

Historic homes and gardens exist today through the hard work of volunteers and foundations committed to saving this glimpse of the past. As a background for movie sets, or lavish events we see a style of life from another time. Bridging the sometimes unsettling opulence such properties represent with the pragmatic thinking of today are the words of Richard Heathcote in his essay Solid Joys and Lasting Treasure: families and gardens “More than their wealth, success or high office, the families who owned Rippon Lea valued their garden for the solid joys it gave them…Today, the amenities offered by a typical garden are still greatly valued: a safe place for children to play, somewhere to dry the washing, a plot for vegetables and a flower garden that adds colour and produces blooms for the home. Today as then, the scale differs but the experience of owning a garden – with its balance of utility and ornament – is essentially the same.”

Rippon Lea adds context to Miss Fisher’s Murder Mysteries now broadcast in 120 countries. The series was such a hit in Australia there was a fashion exhibition with a particular emphasis on Miss Fisher art deco wardrobe fashions at Rippon Lea.

If a trip to Australia isn’t on your calendar this year, catch a glimpse of Miss Fischer’s Murder Mysteries here at home on PBS or Netflix. The series is entertaining and the settings are an Australian national treasure.

P.S. By chance I was watching Chef’s Table featuring the story of Chef Ben Shewry and his Melbourne, Australia restaurant Attica.  Shewry’s Attica ranks #33 in the World’s Best 50 restaurants and it is within a two minute walk of the Rippon Lea Estate.  So close in fact that Ben approached the gardeners at Rippon Lea with a proposal to make cider from some of the 150 heritage varieties of apple trees on the estate.  From that venture Ben worked out an arrangement with the National Trust of Australia to reestablish a 4300 sq ft  vegetable garden on the grounds.  So in keeping with  Fredrick Sargood the idea of locally sourced ingredients continues today.  The garden is so important to Attica that a chef is assigned to work there for four hours a day to harvest and nurture the garden in order to provide all herbs and greens for the kitchen.

I was struck by this innovative collaboration between the estate, the National Trust and Chef Shewry.  Shewry is a native of New Zealand and in the program he recalls the the importance of growing food and deep connection to the land from his childhood. Does it seem the more things change the more they remain the same?  Gardening it is what’s for lunch.

One thought on “On Location—The Garden Steals The Show”