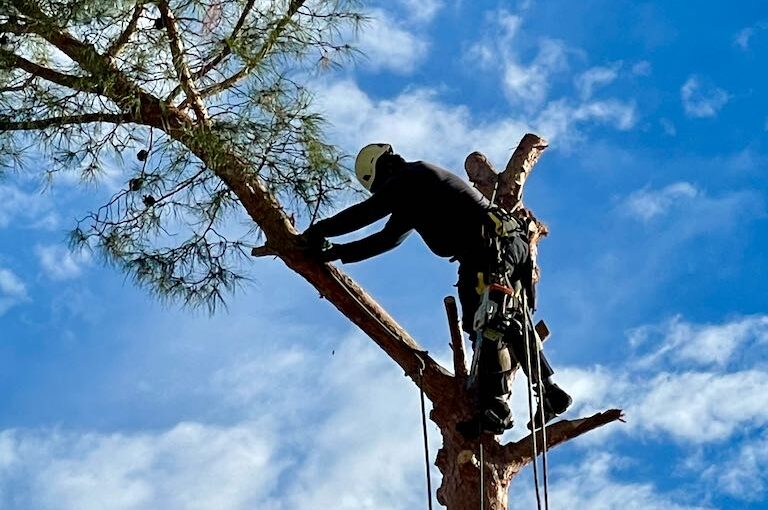 For years, I’ve gardened under the shade of a neighbor’s soaring pine trees, it’s branches extending far over my patio, the grill, and my orange tree. Their dark, dense canopy obstructing the light from the flower beds below.  Now, the shade, the pollen, the pine cones, the needles, and the acidic air, are all gone. The change is extraordinary. The view eastward is wide open; the early morning sky, and moonrise, are visible.

Removing a tree is a dramatic event, a choreographed dance of saws, ropes, skill, and danger. An enormous tree in a small backyard cannot be felled at the base lumberjack style. The giant trees were dangerously leaning, one toward my house and one toward the neighbors. The neighbors inherited these poorly placed trees when they moved in. Massively large, too close to the property line, and in a small space. It made no sense for me to demand the branches be hacked back to the property line.

Fortunately, I was confident the job would be done safely as Enguelberth (Engue,) his brother-in-law, Levi, and Engue’s sons, of Natural Arbor Tree Service, have been caring for the trees in my garden for nearly 20 years. He has trimmed and shaped my Olive trees as best he could even as the pine trees encroached. What an opportunity to see such giant trees removed. I had the best view from my balcony, and I watched in awe as the two-day event unfolded.

Engue strapped on his climbing spikes, attached his 14 in. (35cm) chain saw, hand saw, and ropes to his belt, put on his helmet, ear protection, and began to climb. Waiting and ready on the ground, the equipment included a wood chipper and the positioned truck bed to receive the wood from the branches, a skid loader to move the trunk sections out to the dump truck, and a stump grinder to remove all trace of what had gone before.

Engue climbs up, removing the lowest limbs, they drop, and his sons, Engue Jr, and Gabriel drag them out to the chipper. Levi runs the chipper, devouring the branches one by one.

Limb by limb, over and over, up and up Engue steadily works. The dense weight of the live branches requires great strength on the part of the ground crew. Some branches are 25 ft. (7.5m) in length. The workers never stop or take a break. It is intense, it is dangerous, it is physically demanding, requiring enduring strength to wield the saw, to stand with the climbing spikes surrounding the tree. Finally, the top branch is all that remains. It falls in one last dramatic plunge.

As I watched the action, I saw a hummingbird flying around and around the top of the tree.  A Queen Butterfly lit in the branches seemingly unaware of the tree’s impending doom.

The trunk remained.  Vertical cutting now shifts to horizontal slicing section by section. Seeking a slender waist without extended outcroppings, Engue cuts a chunk about 18 in. (.45m) high.  Once cut, but still sitting atop the trunk, Engue has to wiggle the chunk inch by inch edging it off to drop to the ground. A tree 60 ft,(18m) high will require many cuts to bring the trunk down low enough to fell the remainder at the bottom. As the tree trunk circumference got thicker, the 14″ (35cm) chain saw was switched out for a 24 in. (.45cm) one.

The strength required to wield the bigger saw comes at the end of three hours of non-stop work. Fatigue cannot compromise safety. The temperature on this February day is pleasant, but such work also is done when the heat is over 100 degrees F (38C)

Levi drives the skid loader in, and the crew wrestles the huge chunks of pine trunk into the mouth of the machine. Then Levi navigates it carefully out through the side yard to load the pieces into the dump truck.

Next the remaining 15-20 ft. (4.5m-6m) stand of the trunk is tied at the top (I am in awe of the art of knot tying skills), and Engue climbs down; an angled cut at the base makes a clear fall for the rest of the tree. The ground shakes, the windows rattle. The trunk is then sawed into smaller pieces, loaded, driven out to the street on the skid loader, and dropped into the dump truck. The debris will be driven to the dump and unloaded.

Levi starts up the stump grinder, sawdust and chips fly in the air. Even in my garden, sawdust covers every surface, the nasturtium leaves’ flat surfaces hold a coating of fine shavings. When the stump is 6″ below ground level, the raking, sweeping, and blowing clean-up begins continuing out to the street. The equipment is loaded and driven away. This was the first of the two trees to be taken down. The crew will return the next day to do this all over again.

This was amazing work to see, skillful, dangerous, controlled, and essential. Engue has been working in the trees for over 30 years. The first tree he removed was in 1992 on a golf course at a country club. His experience is extremely valuable. He began his own company in 2006. I admire his ability so much. He is an entrepreneur, a businessman, a man with incredible strength, a father, and a skilled, knowledgeable arborist. He takes all the risks, and now my house is safer because of his work.  Now my olive trees are the star of the skyline.