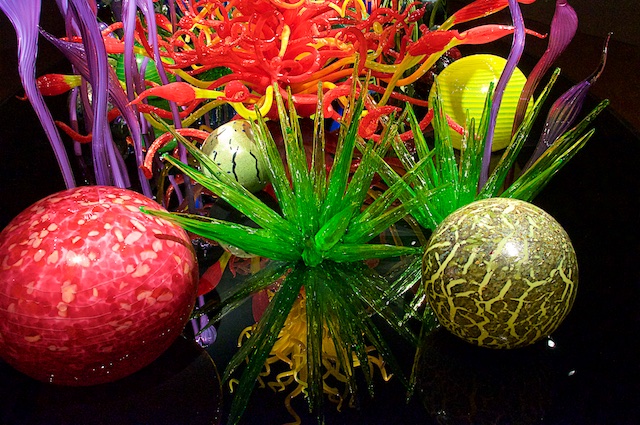 If you are visiting downtown Seattle board the monorail and ride directly to the Space Needle, the most iconic image of the 1962 Seattle World’s Fair.   The 74 acre Seattle Park is a prime destination with many attractions to choose from.  The Pacific Science Center is designed to inspire budding scientists of all ages, the 3D IMAX theatre is celebrating the 100th anniversary of the National Parks, the Music Center plays the history of rock and roll and the International musical fountain invites you in for a splash.

The most recent development is the creation of Artist Dale Chihuly and Landscape Designer Richard Hartledge who have transformed an asphalt parking lot under the Space Needle into Chihuly Garden and Glass.  Opened in 2012, Chihuly’s worldwide popularity has been drawing visitors to the startlingly beautiful glass exhibition ever since.  But the name of this place is “garden and glass” with the emphasis on the garden. 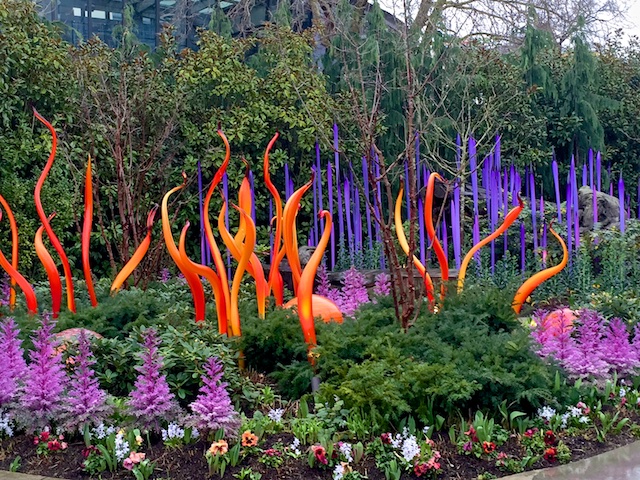 I heard Richard Hartledge speak about the project at the Northwest Flower and Garden Show in 2012.  Chihuly has staged 11 garden installations around the world.  The Desert Botanical Gardens has hosted his work twice, and Chicago, San Francisco, Missouri, and the Kew in London are some of the gardens where his mesmerizing creations have been displayed. Chihuly has a heartfelt connection to gardening, his mother was a gardener with 90 azaleas in her garden.  As a child he and his mother were very close.  According to Hartledge this formative connection to gardens has inspired his work.  The very shapes and structures he creates connect with the colors and shapes of plants.   Chihuly approached the Seattle space to create his own permanent garden. The garden design comes first, then Chihuly draws from the plants as influence for the glass art. As the seasons change the light transforms the plants and the plants transform the glass. 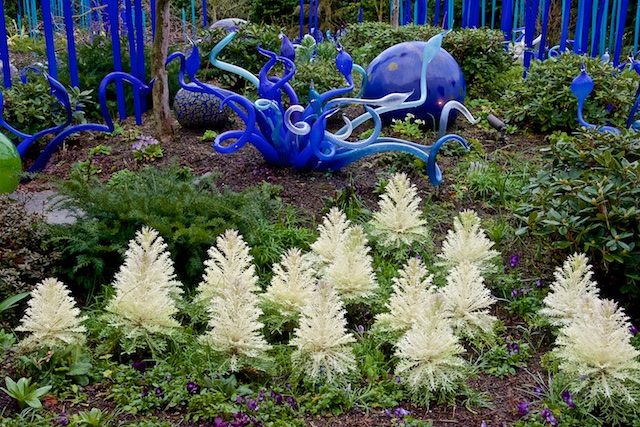 Hartledge told stories that during the construction he would be proceeding with the plant design and Chihuly would come in and see the plants and then go off and redesign the glass to be used in the garden.  Every day was a collaboration and a surprise between the garden and the glass creations designed to enhance it. Dale Chihuly has said, “ ‘I want my work to appear like it came from nature, so that if someone found it on a beach or in the forest, they might think it belonged there.’  With the distinction of being the first natural environment created specifically to showcase a Chihuly exhibition, the Garden at Chihuly Garden and Glass offers a special look at the interaction of plants and the artist’s work.” (website) 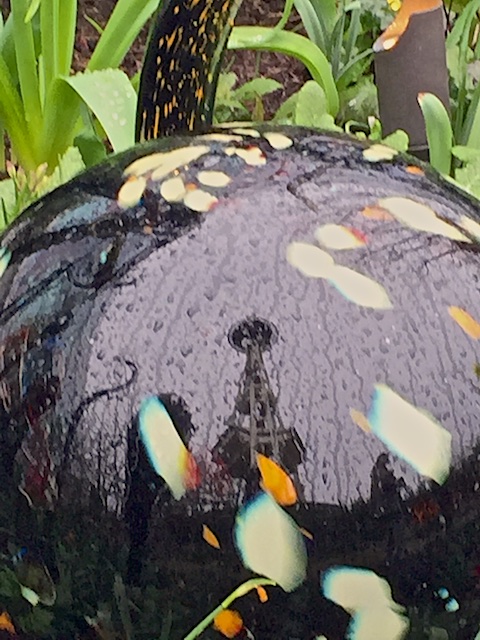 The garden has a glass house filled with colorful glass flowers suspended from the ceiling.  Chihuly had long studied and admired the old Victorian style garden conservatories and he wanted one for his garden.  He designed a contemporary shape with a nod to the futuristic architecture of the Space Needle.  From inside the conservatory you can look directly up at the Space Needle.  The glass spheres in the garden reflect the needle in their surface.  According to Hartledge the garden was designed to have eight exterior projects but it all blends so seamlessly I find it hard to separate them.

One obvious feature is the enormous glass tree located on a rise at the end of the conservatory.  The small hill is planted with black mondo grass mimicking a forest floor.  There is clearly a section of cool colored glass, blues with a touch of yellow, and another section of hot reds and oranges. There are tall reeds, spheres, twisting leaves, large chunks, and spiky towers.

The garden hours are 11 am – 6 pm and during the short days of winter the lights come on late in the day.  The entire glass exhibition in the glass house and the garden is lit.

I’ve visited this garden twice.   During my first visit in February 2014 the plants were sparkling with frost and later that day Seattle had snow, the plants were stunned. During the most recent visit the flowers were bursting into bloom.  The garden is maturing, the plants are integrating more beautifully around the glass. The great feature of this garden is the exterior exhibition will always be changing.as the plants put on a show.

Inside the exhibition of Chihuly’s work is perfection, not a speck of dust to be seen on the black glass stage.  In a condensed space you see the full range of Chihuly’s life’s work. Visitors stand entranced.  It is easy to use up all their allotted time inside.  But the guides urge them out into the garden.

As I was leaving the young man taking tickets at the entrance inquired, “Did you see the garden?” I smiled and replied, “Oh yes, that is why I came.”  And that is why you should go too.