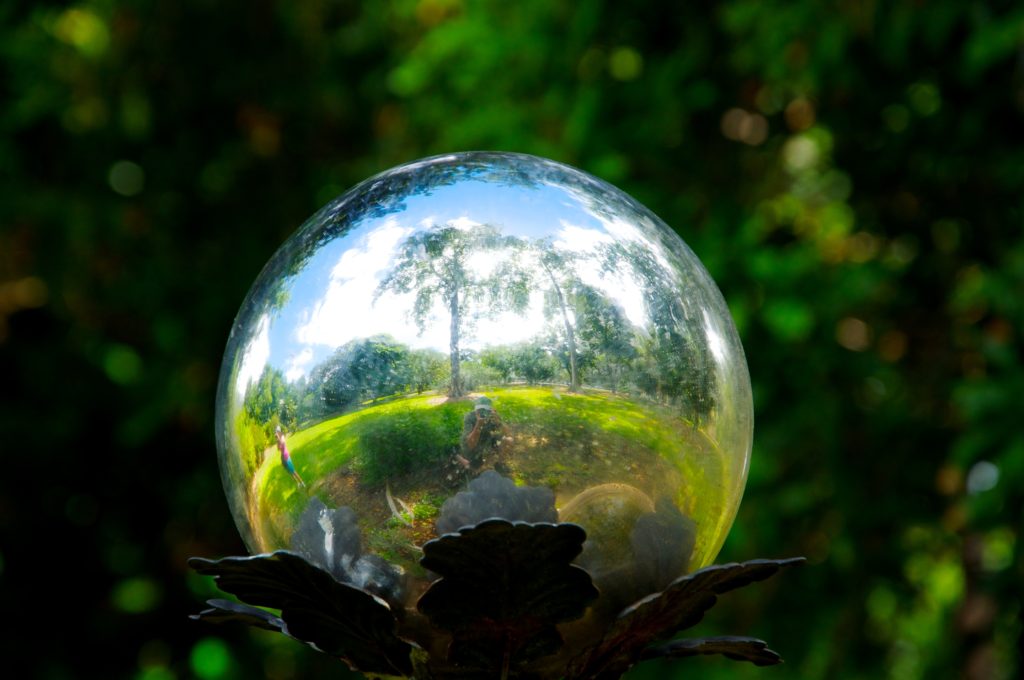 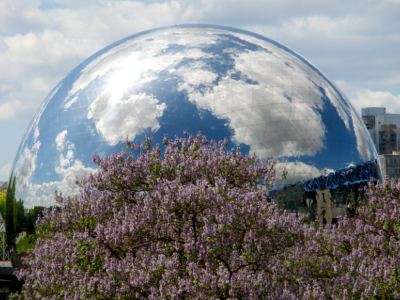 This time of year Christmas trees decorated with lights and ornaments are showing up all around the town.  If you decorate a tree with traditional glass ornaments in red, gold, or silver you will see the beauty surrounding you reflected in their shiny surface.  Stories of glass ball ornaments trace back to the 1800’s in Germany, though the origin of glass balls has been documented back to the 1300’s.  Venetian glass blowers began creating colorful spheres  as gazing balls to reflect the light and the view of gardens. The fragile and colorful balls were a sign of wealth and status used to accessorize the gardens of kings. King Ludwig II, King of Bavaria during the 1800’s, adorned his palace, Herrenchiemsee, his replica of Versailles, with these gazing balls.  Could there be a connection?

These bright and shiny things came to my attention one Christmas morning when my mother received one as a gift from my grandfather.  It was as if a glass ball fell from the Christmas tree right into our garden. Complete with a pedestal stand, the fragile, pretty thing was a bit of shiny magic.  It was  kept safely stored away from December till early spring when it was given a place of honor in the front lawn for all to see. (Perhaps here too it was to be viewed as a sign of wealth and status!) Surrounded by tulips and centered between two large maple trees the silvery glass reflected the flowers, the spring green leaves and a blue sky with puffy clouds.  When you came close and peered into the scene you saw yourself surrounded by all the beauty of the garden.

Though once a province of kings, gazing balls have served a number of functions through the years.  Carefully positioned on the front stoop of a Victorian home a chaperon could discretely observe a young woman and her suitor.  Prim and proper standards of courtship behavior could be stretched by the young couple as they exchanged longing looks by gazing in the mirrored surface rather than directly at each other

Some viewed the gazing balls as a protective force. Evil spirits or witches could not make it to your front door because they could not resist admiring their reflection and would not move beyond it. 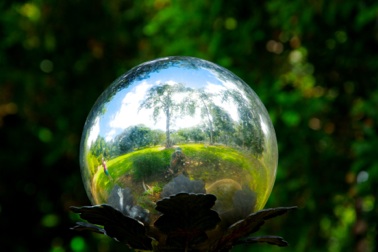 Gazing balls pop up often in public gardens. In the Foster Botanical Garden Oahu, HI,  a 4’’ diameter silver ball allows you to view a reflected image of the massive trees that surround you. 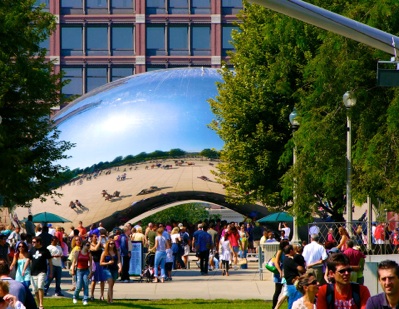 In Chicago’s Millennium Park there is a reflecting sphere, officially called the Cloud Gate yet also popularly known as “the bean.”  Positioned to reflect the skyline of the city, many visitors dance, wave, play and photograph themselves in the stainless steel surface. Suddenly seeing yourself surrounded by beauty just seems to encourage us to be happy. 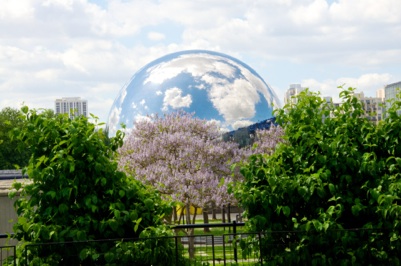 On a sunny May day in Paris, in Parc de La Villette, I encountered the largest gazing ball I have ever seen.  It is 118’ feet in diameter.  Surrounded by blooming jacaranda trees and a blue sky with puffy white clouds, it reflected beauty all around.  Technically, it is built as a geodesic dome and does double duty as beautiful centerpiece and IMAX theatre. Parc de La Villette is one of the largest parks in Paris.

Over the years, gazing balls have gone in and out of fashion.  I have one under my olive trees, surrounded by red salvia, evening primrose and agave.  Today they are available in many colors and made in stainless steel making them less vulnerable to shattering from a sudden hailstorm or other misfortune. 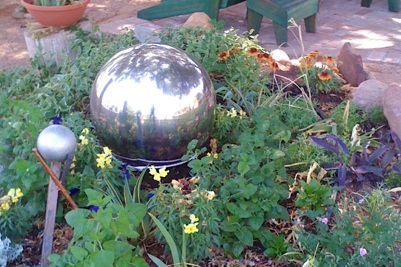 If you want to keep a bit of the holiday magic in your garden all year long perhaps you want to find a spot for a gazing ball.