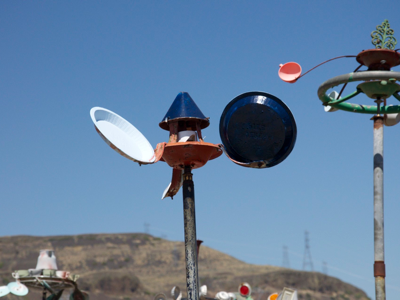 “What makes gardens especially interesting is that making one constitutes creation of a new world–our own world.” – American Eden, Wade Graham

A local garden enthusiast was vacationing in Ontario Canada. Eager to visit the beautiful gardens in the area, she made a list of those she wanted to see.  Arriving at Maple Leaf Gardens ready to explore, she discovered this was a garden more about ice than plants.  The iconic hockey dome of the Canadian pro-team the Maple Leafs was not her idea of a garden.  To be fair, old photos show a landscape of gardens surrounding the famous building but the history of the structure details the hockey matches rather than the horticulture.

Yet what is a garden?  A word so familiar yet open to so many variations. Defining a garden as a plot of land around a house used for growing flowers, vegetables and fruits seems adequate and yet a garden can be none of these and still be called a garden.  There are water gardens, herb gardens, children’s gardens, pizza gardens, salsa gardens, butterfly gardens, beer gardens, meditation gardens, Zen gardens and more.  A garden can grow food, cover bare dirt, create beauty, or express the gardener’s soul.

A garden is a creation, a modification of land, maneuvered, and arranged to suit the gardener.  Created in a particular time influenced by wealth, values, passions, politics, fashion, religion, ethnicity and more, a garden reveals a great deal if we look for the story.  If you are traveling and looking for gardens, travel guide books will keep things interesting.  You may find surprising gardens that involve few plants but are worth a visit.

By the Grand Coulee Dam you find the Gehrke Windmill Garden.  Eastern Washington is an arid climate with cold winters, occasional hail, hot summers and hungry flocks of turkey.  Flower gardens require great care.  When Emil Gehrke retired from engineering work on the Dam he wanted  “to make something pretty for young people to see, . . .We throw away too much, I like to show that practically any object can be reused.” 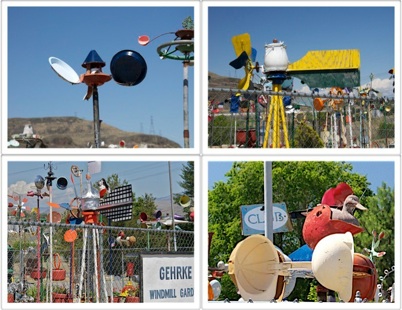 So he began repurposing metal scrap into whirligigs and displaying them in the front yard.  He captured the wind and set it to work revolving old bicycle wheels with objects attached to catch the breeze.  He made over 500 whirligigs.   A coffee pot atop a wheel with cups circling the wheel to spin in the breeze.  A duck sitting inside an old baseball helmet with hardhat shells catching the wind. The air captured by funnels, plates, and garden rake tines making combinations of every type of castoff metal objects. Some of them are anchored in old washing machine tubs, where geraniums are planted to add color but this is a unique garden.

All of these whirligigs in his front yard naturally got the attention of city officials. Some saw it as out of control eccentric and others as spinning beauty.  After Gehrke’s death some of the “Whirl Art” was moved to the Seattle City Light Gallery (utility company) and many were moved to a fenced plot in Electric City near the Grand Coulee Dam.  After a tour of the hydro dam of massive engineering spinning water into power, a stroll around the windmill garden is a contrast of spinning engineering.

My guidebook led me to another surprising garden in Eureka, CA. The Romano Gabriel Wooden Sculpture garden is now housed in a storefront structure in the old downtown area.  Though it too was once on a plot of ground fronting a house in Chico, CA.

Photos of the original garden show the house virtually obstructed from view by the 100‘s of wooden sculptures made from discarded vegetable packing crates and simple saws.

Romano Gabriel, born in Italy in 1887, was a carpenter by trade.  Described as a shy and hardworking immigrant who built several houses in the northern CA area.  For over thirty years in a workshop at the back of his house he created his wood sculptures. 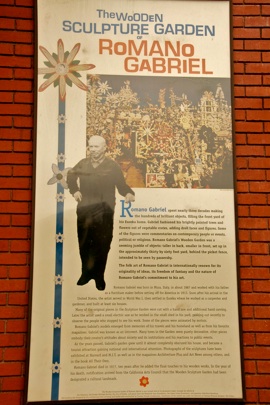 This collection included wooden flowers, trees, pinwheels, dancing figures, and more.  Some were simply representational objects, others expressing political points of view such as when he was mad at the Pope and represented this in his sculpture.

When there is one sculpture in a front yard garden it is noticeable. If there are 25 sculptures it is often seen as a nuisance.  When there are over 500 sculptures the garden achieved notoriety and an exhibition at Harvard and MIT with international acclaim. 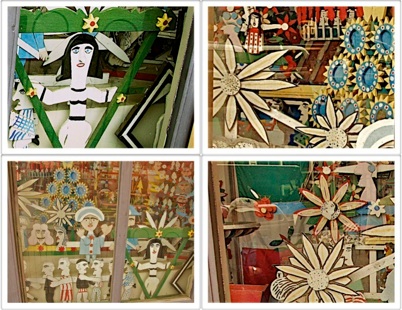 Romano Gabriel’s garden was his own unique garden creation until his death at age 90 when CA designated it a folk art treasure.

Is this a garden?  Certainly both Gehrke and Gabriel cultivated their own creative expression in a plot of ground around their houses.  One created a garden that captured the wind and the other a garden that captured attention. If you find your travels bring you to a garden unlike what you expected, enjoy the surprise.  Creating a garden allows all of us to create our own world.