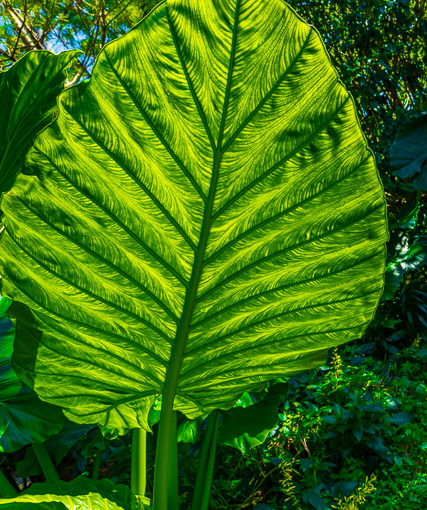 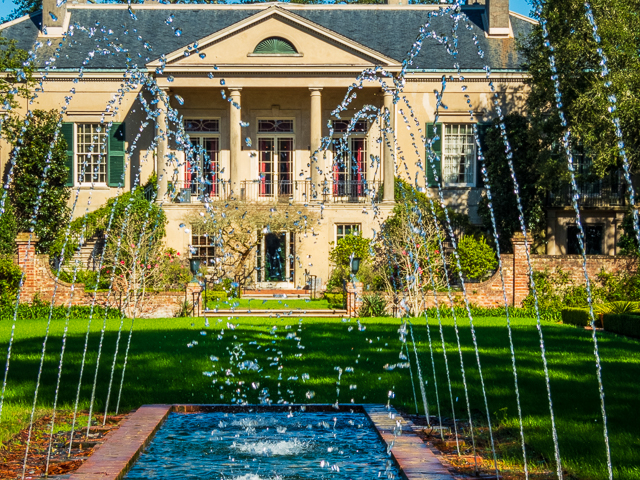 The Longue Vue House and Garden, New Orleans, LA,  built in 1942, by Edgar & Edith Stern is a masterwork of design. Every room in the house looks out on a perfectly placed scene in the garden.  Imagine having the foresight and the resources to set your home on the land in such a way that every window offers a connection to the garden looking out on a painting done with plants. Ellen Biddle Shipman considered the dean of women landscape architects, influenced the integration of the garden views in the design of the home. This was created at Longue Vue. The story of the Sterns* is inspiring in every way. The garden is quite genuinely genius in design.

You enter the property through an allée of live oaks leading to the Classical Revival style home which Shipman decided would fit better with the gardens she designed.  The original plantation style home was rolled away to another location! Seriously, this is a powerful garden designer who can persuade the homeowner to change their house.*

Ellen Biddle Shipman led the way in creating gardens rooms. There is the Yellow Garden, the Spanish Court, the Pan Garden, the canal garden, the wild garden, and even more.

The Spanish Court grabbed my attention as it was inspired by the Generalife garden of the Alhambra in Granada, Spain. Here the Spanish Court has 14 fountains.  There is a copy of the reflecting pool fountain with the arching streams of water from Generalife.  Unlike the enormously popular Granada in Spain, here just Rich and I were in the garden, the sun was shining, and the water sparkled and splashed as it fell in symmetrical arcs. 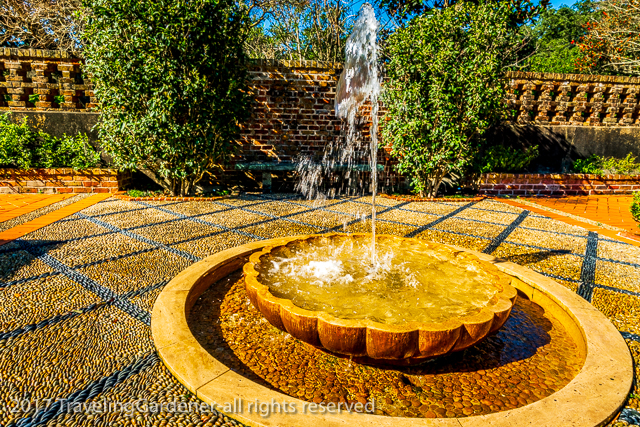 The low, wide bowl fountains run the length of the courtyard.  Small patio spaces are defined along the way. 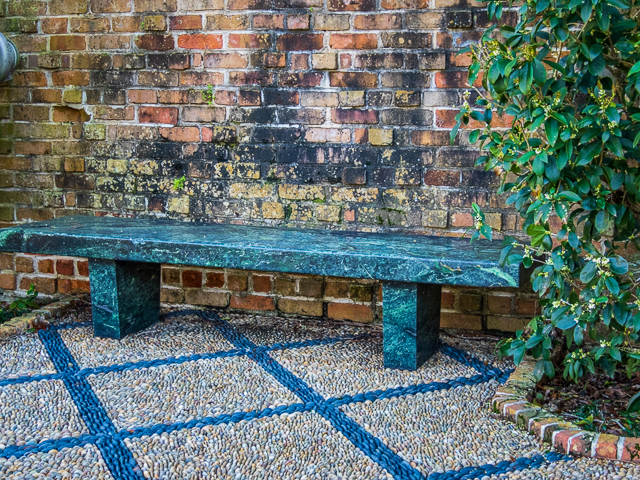 Two massive green marble benches sit against the walls and on a floor of patterned pebbles. 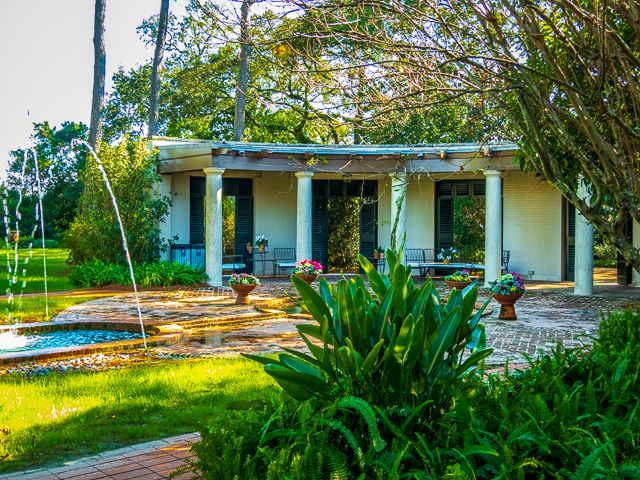 The courtyard ends with a loggia and comfortable chaises, tables, and chairs for enjoying a view back to the main house 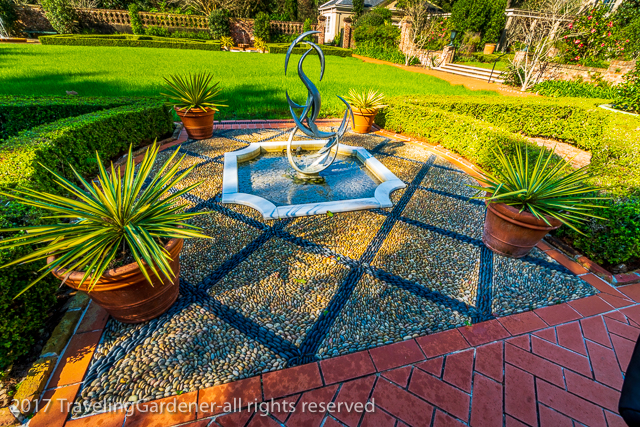 The Sterns were great art collectors, and that included art for the landscape. A kinetic sculpture by New Orleans artist Lin Emery breaks up the symmetry in the Spanish Court. In the Yellow Garden, a bronze silent fountain was sculpted by Robert Engman. There is no splashing sound, no dripping, but the water movement in the sun is mesmerizing. 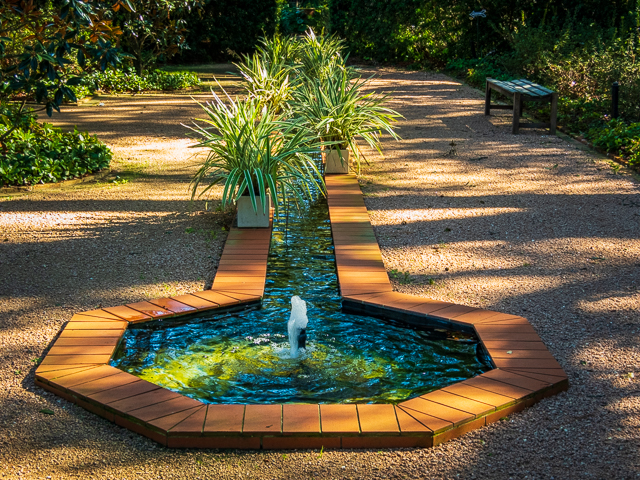 The Canal garden continues the Spanish influence with a small rill of water running the length of the secluded space behind the loggia.  At either end, there are choices of more garden rooms to explore. 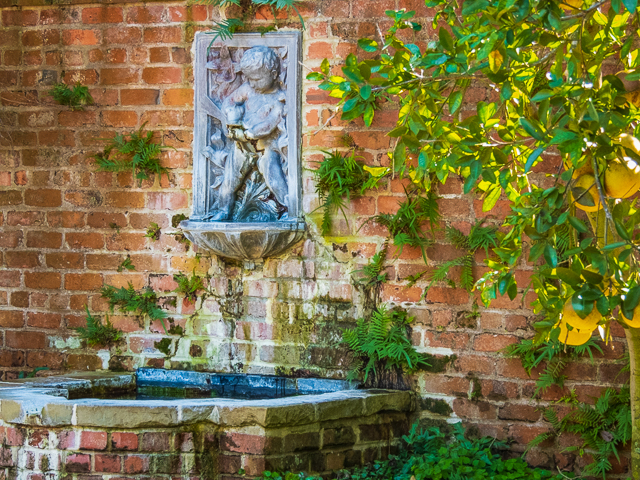 The walled garden is now a vegetable plot, secure and surrounded by high brick walls.  The opposite end is the Goldfish Pond where a raised seating area allows for great views of the fish pond, the house, and the golf course.

There is a collection of over 3500 Louisiana Iris in the Wild garden. A project guided by Edith Stern, Ellen Shipman and Louisiana Naturalist Caroline Dorman.  There are also Camelias, wildflowers, meandering pathways, a stream leading to a trickling waterfall and a folly where you can sit and contemplate the incredible dedication, creativity, and devotion of creating such a space.  Obviously having the finances to direct such a project is a great boost in making such a garden but it clearly requires a commitment to achieve such a result.  Ever the philanthropist Edith Sterns began preparing for the idea of opening the gardens to the public as early as 1960.  Today the garden and the house are open to the public to visit and enjoy.  In 2005, the gardens were severely damaged by the flood waters of Hurricane Katrina.  Flood waters inundated the garden for two weeks, and 60% of the entire plant collection was lost.  The garden was reopened in 2006 staying true to the plant palette designed by Stern & Shipman.

Gardens are always changing and evolving, but this garden continues to be a grand property created by women who loved gardens.

More about Edgar and Edith Stern

*“Edgar Bloom Stern (1886-1959) was an established businessman in a cotton brokerage and a former president of the Association of Commerce. He had begun to follow in his parents’ philanthropic footsteps when he met and married Edith Rosenwald in 1921.

The daughter of Augusta Nusbaum Rosenwald and Julius Rosenwald, then president of Sears, Roebuck and Company, Edith Rosenwald Stern (1895-1980) found in Edgar a person who understood her family’s need to give back to the community. After their marriage, the Sterns built a home in New Orleans, which they named Longue Vue after the tea house on the Hudson River where they had become engaged.

Following the examples set by their parents, the Sterns honored their philanthropic heritage of civic responsibility by helping to establish Dillard University and the Flint-Goodridge Teaching Hospital for African-Americans and by working on voter registration reform. They also supported the New Orleans Philharmonic Symphony, numerous artists of all mediums, and many other worthwhile civic endeavors.

The Sterns earned New Orleans’ highest civic honor, the Times-Picayune Loving Cup, awarded to those who give the most of themselves to better the city as a whole. Edgar Stern earned the Loving Cup in 1930 due in part to his role in establishing Dillard University and its affiliated teaching hospital, Flint-Goodridge. In 1964, Edith Stern earned the Loving Cup for her role in promoting education through the founding of Metairie Park Country Day School and Newcomb Nursery School. In 1977, the New Orleans States-Item named them the city’s leading philanthropists of the past hundred years, further noting, “every city should have its own Sterns.” “  Longue Vue Website

Ellen Biddle Shipman’s worked on the garden from 1935-1950. “Design, greenery, and privacy were the three essential characteristics of a real garden, as cited by Ellen Biddle Shipman (1869-1950) in a 1930 interview. Considered the dean of women landscape architects, Shipman designed over 600 gardens between 1914-1946, contributing significantly to a thriving gardening revival that occurred during the early twentieth century. 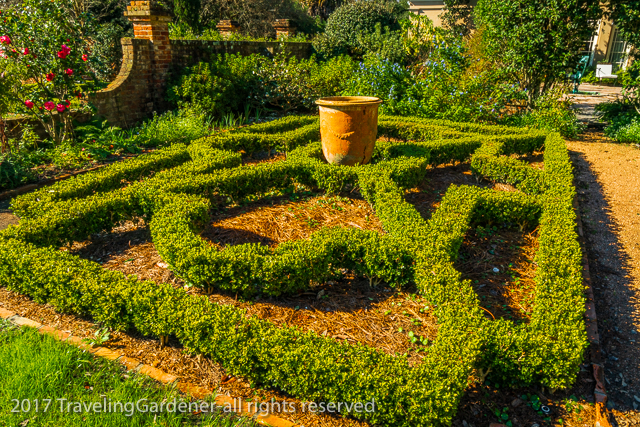 Longue Vue House and Gardens were designed by Shipman from 1935-1950 at the end of the Country Place Era, a movement in American landscape design which resulted in a return to country life – a direct response to the rapid urbanization of America. Design features of this time included garden rooms, terraces, tree allees, formal courts, and fountains.”    Longue Vue Website 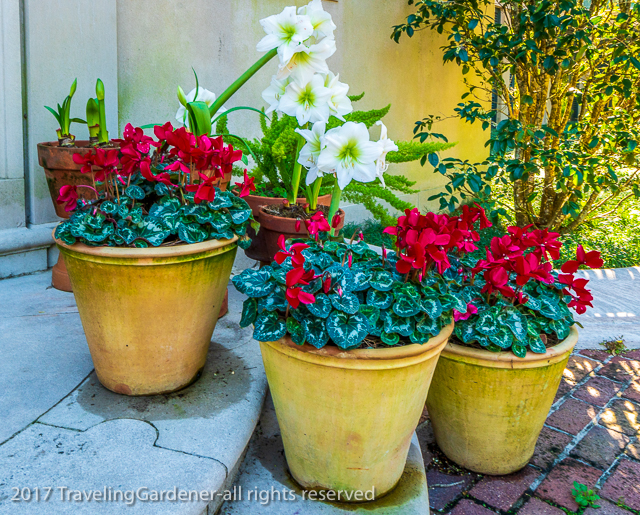 **Per our discussion w/ the head of operations at Longue Vue, the Plantation House was moved on rollers to its new location.  It was such an enormous project it could only be moved about two feet (less than one meter) each day so it took nearly two years to move it. It still stands there today

One thought on “Longue Vue House and Garden”