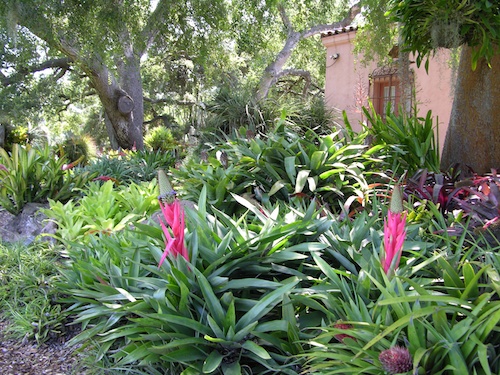 In the wonderland that is California, Madame Ganna Walska’s Lotusland is as Walska herself put it: “out of this world.”

Ganna Walska was a fascinating, exotically beautiful opera singer. Born in Poland in 1887, her mother died when she was only nine, she lived with relatives until she fled Poland for Russia.  By age 20 she had married a Russian Count. She began singing opera to gain the attention of another very wealthy Russian.  She created her stage name “Ganna” a Russian form of Hannah, added “Walska” for her love of waltzing, and Madame came as a title given to known opera singers and actresses of the time.  The first half of her life was devoted to her singing, her marriages, (six in total), a career which included her very own theatre in Paris, her own special scent and a spiritual quest for personal fulfillment.  Men pursued her and her many marriages added to her fortunes.

As her opera career declined she sought out greater spiritual fulfillment.  Theos, a handsome yogi and Tibetan Buddhism scholar (husband number six) guided her to California. The purchase of the Cuesta Linda Ranch, CA in 1941 was to establish Tibetland -a retreat for Tibetan monks. Enlightened marital bliss proved elusive and Theos moved on to higher ground.  Her new quest became plants and gardening. Devoting all her energies here she renamed the grounds “Lotusland” for the Indian Lotus flowers growing there.

Visiting this garden is your priority for the day, one should not rush. Reservations are required to obtain the address. Lotusland is in the Montecito area of the Santa Barbara hills. The Docent led tour is limited to groups of 10 or less.  You need the Docent to find your way through the labyrinth collection of gardens.  I’ve been there twice and I’m sure I could not find my way out alone. Plus the Docent delights you with the stories of this great place.  Madame, as she preferred to be called, never lived in the big house, she entertained out of doors and she gardened and lived with the motto, “more is better.”

Madame was creative, artistic, rich and passionate about plants. Legend has it that she sent her gardeners out into the community with cash in their pockets to buy the biggest and most impressive plants they could find.  She wanted them moved from others gardens into her own.  She sought out all the best advice from landscapers and designers to help her transform her garden and then she added her own ideas!

Madame lined the driveway with a mass planting of 300 agave attenuata leading to the house.   Giant weeping euphorbias and golden barrel cactus surround the entry door.

The previous owners had installed tile work around the house in Moorish designs, she kept these elements, and added masses of roses.  She planted a blue garden of blue agaves, blue fescue and blue chalk fingers. When she learned the a water bottling factory was chipping blue slag glass out of its kilns she purchased the lot to line the pathways of her blue garden. The chunks of glass reminded her of a necklace of jewels for the garden.

A theatre garden with seating for 100 was created. Performances were done on a grass stage, with boxwood hedges for a backdrop and actors entering from the green wings.  She added a permanent cast of characters in antique stone figures imported from her Chateaux in France.

A topiary garden of 26 circus animals was added in the mid 1950’s.  Hedges clipped into the shapes of bear, giraffe, camel, gorilla, seal, and other fanciful shapes still stand today.  Her garden clock, once the largest in the world, features copper zodiac signs surrounded by low growing succulents.

The orchard of nearly 100 fruit trees both deciduous and citrus is highlighted by the long arbor of Eureka lemon trees shading the walking path.  Mature cyprus, oak, and palms provide masses of shade throughout the garden. There is a grove of pony tail palms, and a small forest of dragon trees.

This is a grand estate garden designed in a golden age financed by her accumulated fortune.  So committed to its creation she sold her vast jewelry collection for nearly a million dollars to finance her cycad garden.  Obviously seen as an eccentric action then, today it “is thought to be the most complete in any American public garden, with over 900 specimens, nine of the eleven living genera and more than half of the known species represented.” (lotusland.org)

There are 18 themed gardens on 37 acres. Equally fascinating are the Fern Garden, Bromeliad Garden, Japanese Garden, Australian Garden and the most recent addition, the Cactus garden but that is a story for another time. It is a California adventure to wander these grounds.

Madame Ganna Walska pursued her passion here for 43 years. She died in 1984 at age 97 or 94 (depending on which birthdate is correct.) Claiming the title of “Head Gardener” she continued to walk, aided by two canes, throughout the garden directing improvements until just shortly before her death. “Lotusland is home to more than 3,000 different plants from around the world.” (lotusland.org) She came to California to find a spiritual paradise and created a garden paradise.  Perhaps they are one in the same.