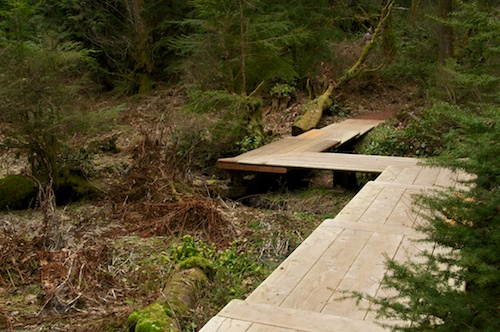 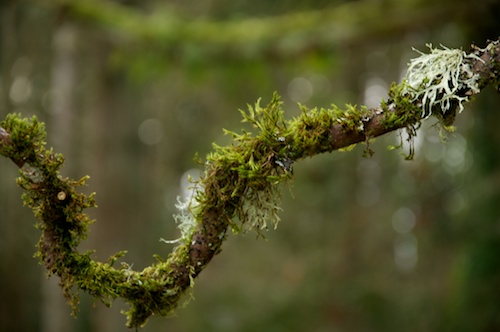 The Bloedel Reserve on Bainbridge Island in Washington State is a unique public green space, often referred to as both a garden and an arboretum. The word reserve is defined as a tract of land set aside for special use. The 150 acre sanctuary is not a place of formal flower gardens, but it is a garden created by an exceptional couple who lived in a French country-style house overlooking Puget Sound. Surrounded by forested lands, they worked to discover a way to arrange the plants to create a place where “one can come for a walk in the woods.”

Prentice and Virginia Bloedel moved to Bainbridge Island in 1951.  Before this, Prentice worked alongside his father in the timber business in the Northwest.  A visionary thinker, his contribution to the family business emphasized renewable resources, replanting trees in clear cut areas and reducing waste of wood products by inventing milling equipment and new uses for sawdust.  Prentice always felt a deep connection to nature and believed it held great therapeutic value for human health. He encouraged study of the health-nature connection in the early 70’s. 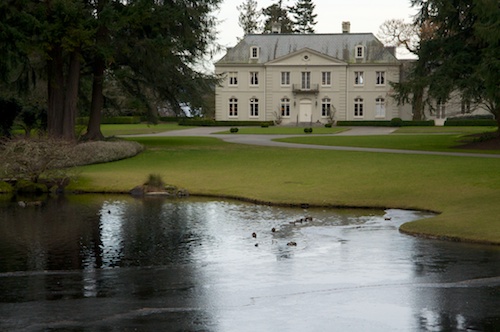 Retiring early after the sale of his company, he, Virginia and their two daughters first explored the land surrounding their new home. Long walks allowed them to observe the contours of the land and the movement of the water. They identified the plants, trees and shrubs which grew on the property. Living in the midst of this green paradise for 35 years, Virginia and Prentice took great care to develop and maintain the reserve. Prentice, a trained scientist and engineer, consulted with designers, gardeners, engineers and horticultural experts, soliciting their best ideas and design recommendations ultimately making the final decisions about the property.

In a 1980 article Prentice wrote for the University of Washington Arboretum Bulletin he spoke of the purposes and goals for the reserve.  It reads as a love letter to nature. Here are some of his words:

“Respect for trees and plants replaces indifference: one feels the existence of a divine order.  Man is not set apart from the rest of nature–he is just a member of that incredibly diverse population of the universe, a member that nature can do without but who cannot do without nature.”

“It will require sensitivity and restraint to preserve this inheritance, I think very little should be done except to open it up with a system of paths and roads- paths that guide the visitor through interesting terrain, to intriguing vistas and points of interest; paths that offer the tranquility and solitude of a walk in the woods”

“. . .providing people wandering about the Reserve a refreshing experience of nature and a broadening of their appreciation of their world.”

I had the opportunity to visit the Bloede Reservel in mid February, however the temperature was 26 degrees with snow expected. I believe that any time of year is a perfect time to visit gardens but on that day my belief was surely tested.  Hoping for the best, I set out under an overcast sky, unaware the walk would introduce me to such “intriguing vistas and points of interest.”

It was a beautiful day to walk through a meadow.  The wide expanse of open space is bordered with trees. Wooden barns, once used for sheep, are beautiful weathered features along the path.  Walking through the forest, a trestle bridge provided a view down into a flowing stream. On the day of my visit, the bird marsh pond water was dark and ice covered, the fallen branches scattered on top.  A few ducks swam in some open water.   Further along, a board walk allows passage over a bog which the map guide promises a summertime chorus of frogs.

The French country-style house now serves as a visitor’s center.  The library offers visitors the opportunity to read from Prentice Bloedel’s extensive horticultural collection.  You can look out over the water and imagine the beauty of the many sunrises and sunsets viewed over the years the family lived here.  Further on a Japanese-style guest house and garden was added to accommodate the growing family.

Camellias, rhododendrons, Douglas Fir, Birch and many other trees, 300 varieties by one account, grow on the property.  The plants are not labeled since  a natural look is the primary objective here.  All of these features are enough to make for a wonderful visit, but in my mind the best was yet to come – the moss garden.

Created in 1982, this enchanting place began with “2200 flats of moss brought from Ireland. Cut into little cubes, a total of 275,000 plugs were planted 6” apart to provide a temporary moss floor.  Over time, 12 species of native mosses began to grow and take over.” (Visitor’s guide)  Today it is an astonishing site.   A verdant green carpet of moss growing like grass, growing up and around the trees with long wavy tendrils and compact cushiony tufts. Moss covering rocks and decaying logs. Moss grows in shade, here it has the perfect growing conditions.

Most of us view moss as “just moss,” but further study reveals a surprising amount of information about moss, liverworts, and lichens. Within true moss alone there are 12,000 species.  Moss grows in groups, so identifying specific species generally requires a microscope and a dedication to recognizing the differences in tiny leaves and stems.  Perhaps if you visited with your microscope you could also see the leprechauns dancing in this magical place.

Further along the path is the Reflection Pool, where nature is the masterpiece.  Surrounded by an English Yew hedge, with a single bench placed on each end,the elongated pool (37′ x 140″) frames the trees, plants and sky.  In other public gardens one would often find a bronze sculpture or fountain in such a feature.  But not here, it is as if the Bloedel’s are saying “Sit here and see this beautiful world you live in, the masterwork is framed and look! Look closely.  be touched by nature.”

During my visit the snow held off. We stayed until the gates were being locked, time sending us on our way.

Prentice Bloedell died at the age of 95 in 1996. Many wonderful tributes were written about his life.  Richard Brown, Director of the Reserve from 1979-2009 wrote,

“I like to think of the reserve as his greatest gift. It uniquely reflects his artistic visions and it provides hints of his romantic character.  It also provides an oasis of peace and natural beauty for people and it serves as a haven for flora and fauna.  It’s available to everyone, regardless of religion, education or health.”

The Bloedels gifted us this oasis of peace and natural beauty; a walk in the woods is a gift we give ourselves.

A Bit More About Moss

Moss, the species is classified as Bryophyta.

In Elizabeth Gilbert’s latest novel, The Signature of All Things,  the main character, Alma, is a Bryologist, in addition to being a complex and fascinating character.

Moss grows in shade and that can be on any side of a tree.

There are great books on Moss, my favorite is Gathering Moss: A Natural and Cultural History of Mosses by Robin Wall Kimmerer.  She is Professor of Environmental and Forest Biology at the State University of New York College of Environmental Science and Forestry.  It is a science book with a narrative informed by her work in indigenous cultural history and the uses of moss.

Robert Mum was also a master of writing about Moss.  His article for the Ontario Naturalist Magazine in the winter of 1979, titled Discovering the Mosses is full of surprises  of the varieties found in this miniature world.  If a person’s only exposure to moss is in a nursery or craft store, like me, he quickly corrects the vast misinformation by writing:

“. . before defining just what a “true moss” is, let’s first find out what it isn’t by unmasking some of its pretenders, most of which are misnomers, pure and simple. Spanish Moss, often seen drooping in grayish veils from the trees of decaying southern plantations, grows parasitically on trees in the southern United States and tropical America. Although it hangs like moss from branches, it produces flowers and seeds (unlike real moss) and is related to the pineapple. Reindeer Moss (also called Caribou Moss) is a finely branched lichen, usually in shades of white, growing on the vast tundra and providing a supplementary diet for the caribou, as well as an emergency diet for lost hunters and explorers. Lichens are a strange amalgam of fungus and algae in one organism, lacking both the leafy structure and the fresh green colour of moss. Irish Moss is a purplish seaweed known as carrageen; it is bleached and used commercially in medicine and as a filler for some foods such as ice cream to keep it from melting. And a mossback turtle is only the proud owner of green algae, not moss, growing on its shell.” 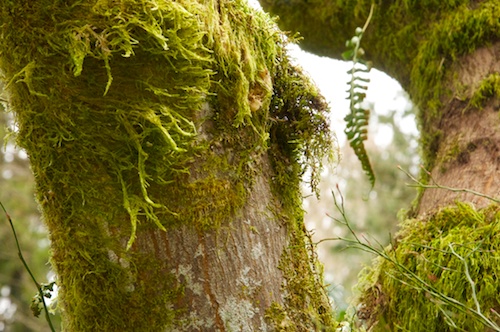 Both Kimmerer & Mum write of the many uses of moss by humans.  In WWI sphagnum moss of bogs was used for surgical dressings of wounds both for its absorption of moisture and its antibiotic benefit.  Indigenous women used a type of moss for absorption of their menstrual flow and another type for of babies’ urine way before anyone thought of pads and pampers.

Moss growing on rocks can crack the stone over time

You can buy a Moss Milkshake from Moss Acres.  Just add water and you can grow your own moss garden. Perhaps you saw this demonstrated on Martha Stewart’s show

The now-extinct Hairy Mammoth dug out of the ice in northern Siberia in the late 1800’s had three species of moss in its stomach contents.

And there is more, much more about a plant which may grow as little as 2 cm in 8 years!

I am fairly confident I won’t be growing moss in my Arizona garden, given the shade and moisture needed.

2 thoughts on “The Caring of the Green. . A Love Story”