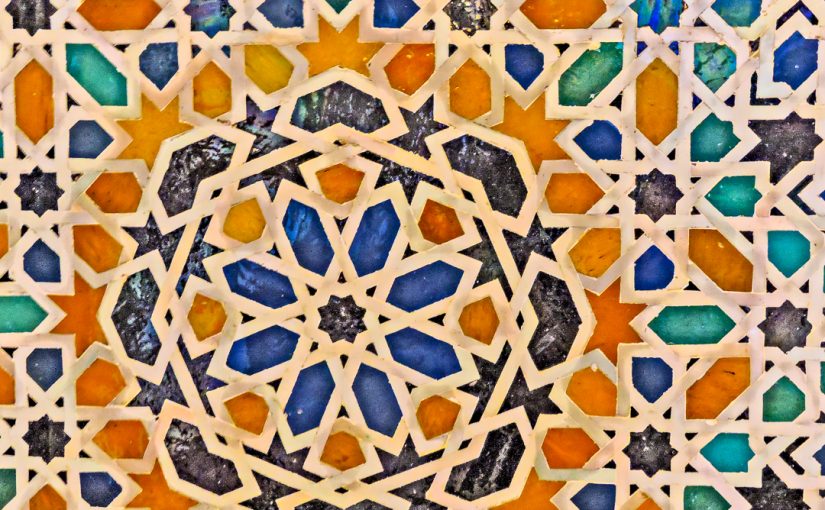 The Alhambra, in Granada, Spain looms large in the history of gardens.  Monty Don, host of the British program, Gardener’s World, says “the Islamic mind changed the way the whole of Europe gardens” and the evidence bears this out the more I learn about the Islamic paradise garden. 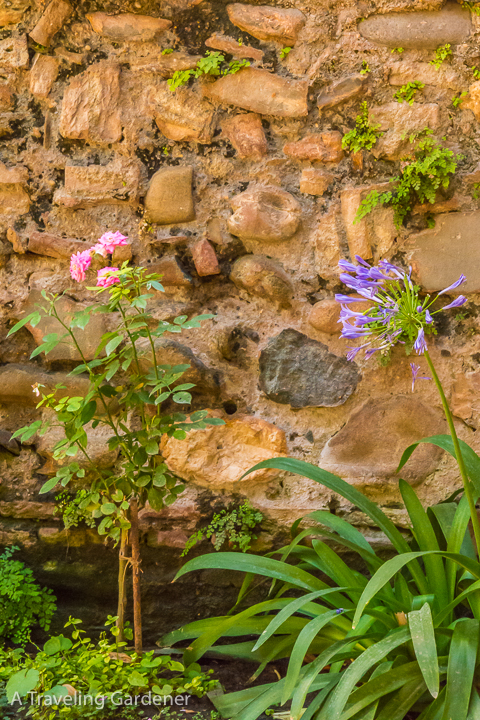 I visit lots of gardens on my own, wandering thru in relative peace, with minimal other visitors in sight.  This is not possible in the Alhambra as it is one of Spain’s major tourist attractions with over 2 million visitors every year.  We signed on for a guided walking tour. Immediately we were grateful to be guided thru this enormous fortress filled with history and gardens.  Even after a four-hour tour I realized how little I understood about the significance of this place in garden history.  Since returning home I have read extensively about the Islamic influence on gardens and discovered they are responsible for advancement and improvements in irrigation systems, roses, myrtles, tulips, pomegranates, oranges, figs, cypress, and a 16-chapter Book of Agriculture written in 1085 AD, so yes, it is clear the contributions of Islamic gardens have made an impact right into our own gardens of today.

Islamic gardens aim to create paradise on earth and I love this idea.  The garden is a place for contemplation, for pleasure, a refuge from the heat and dry world outside the walls of the fortress.

The architecture on the exterior is austere, red brick (Alhambra means “the red palace”) with 23 towers appearing over the thick, soaring walls, a total of 26 acres surrounded by a mile of walls. The bare outside hides the extraordinary architectural beauty of mosaics and carved beauty to be found inside. In the 250 years of occupation each sultan ruler remodeled and improved the city within the walls.  Inside there are three sultan’s palaces and one mega size Christian palace built after the end of the Moorish occupation of Spain. The Christian palace has no garden.  It is an intricate and complex history of a time of great art and learning, but my focus is the gardens.

Control of water was and still is a symbol of power. Water channels or rills shape the design of the rectangular garden with the royal apartments built to open onto the courtyard. The water rills are said to represent the four rivers of paradise, some say this means the ancient rivers of Pishon, Gihon, the Tigris, and the Euphrates surrounding the Garden of Eden, but other sources suggest the rivers are of water, milk, honey and wine. (I’m good with that.)  Clearly water represents life: the plants can grow, you are saved from thirst, you can wash and keep clean, you are cooled by the breeze across the water, and bubbling water creates a comforting sound.

The Generalife (general-eef-a), inner garden courtyard, is today most famous for the water spouts which were not original to the garden but added during the 1800’s renovation.  Still it is the iconic image so well known today. 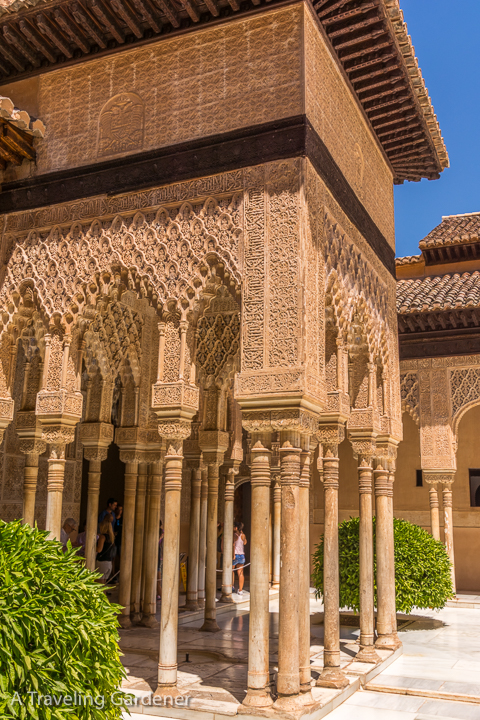 The courtyard is planted with flowers and aromatic shrubs grown during the times of the Moorish rule. The courtyard is surrounded by high walls with decorative columns and arched openings at each end.  This was the courtyard for the Sultan to sit in contemplation, obviously maintained by minions charged with the task. 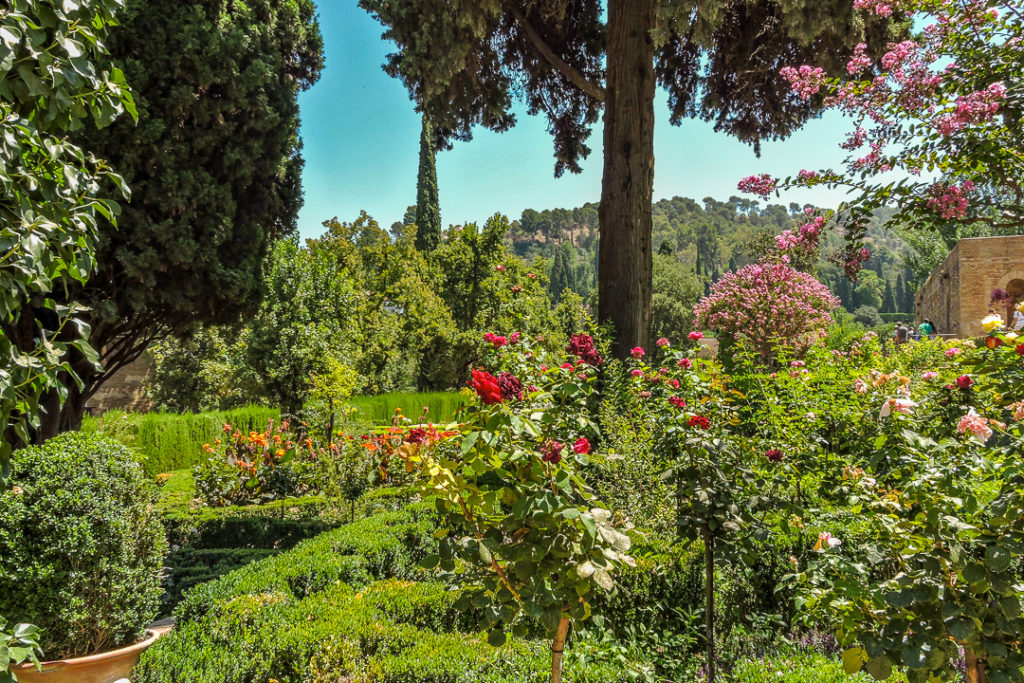 The Alhambra garden was built 25 years later for his son, Muhammad V.  Here is the Court of the Lions, where 12 marble lions spout water from their mouths and orange trees are grown in the corners.

Nearby is the Court of the Myrtles, where a large rectangular pool reflects the magnificent palace.

The hedges of myrtles are trimmed just to a height and width that allows one to brush against them with your fingertips which stirs the fragrance rising up to your nose as you walk the length of the courtyard. I have a myrtle shrub in my garden and the idea of such significant scent caused me to go out and cut a few stems to bring inside for further inspiration.

In between the two palaces are orchards and a large vegetable garden which provided food for the residents.  Elsewhere, Cypress hedges are grown to represent the walls of buildings that were destroyed over the course of time. The hedges create shade and garden rooms that are truly pleasurable to walk among.

For a time, the Alhambra was neglected and fell into ruin.  In 1831, American writer, Washington Irving published the book, Tales of the Alhambra.  This book, with its stories of palace intrigue, sultans, and beautiful gardens, generated renewed interest in the fortress resulting in its restoration and emergence as a tourist destination.  Now a World Unesco Historical site, visitors may step back in time as they explore this contribution of Islam’s influence on the European continent and certainly its contributions to our gardens.

Around the World in 80 Gardens, Monty Don

The Story of Gardening, Penelope Hobhouse

Gardens, An Essay on the Human Condition, Robert Pogue Harrison

The Reason for Flowers, Stephen Buchmann

Gardens From the Air, Latini & Migliorni

Tales of the Alhambra, Washington Irving

12 thoughts on “Out of the Desert into the Garden”