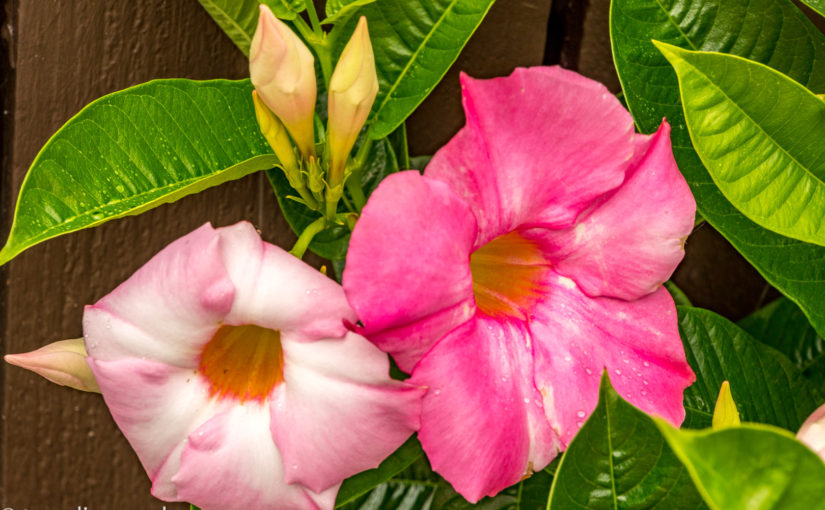 I was walking the red brick sidewalks of Germantown near downtown Columbus, OH when I stopped mid-step. Before me, evidence of a passionate plants person appeared. Gardeners can’t hide their enthusiasm for life, they reveal themselves, with flowering vines leaking out through the fence,

colorful foliage shooting up from the ground and hanging baskets blooming at eye level. All of these things appeared in front of a small red brick house on the corner of the street. This location allowed for a long walk of loveliness passing a brown wooden fence hosting vining Mandevilla and backing vivid coleus planted in ground. Deep blue pots tiered on artistic stands were filled with plants.

I was spellbound and then I was delighted to see that Paul Schrader, the gardener, was working on his front flower bed! How could I be so lucky to be here at this moment, to be able to chat with this incredible gardener? This was early June and Paul explained that really his garden just wasn’t quite finished yet as the spring weather had been so unpredictable he was still waiting for some special order plants to arrive to add them to the mix.

He invited me into his back patio where a water fountain, an antique urn, and more blue pots set the scene.

Paul plants 130 Mandevilla each year, he grows many varieties of hibiscus, begonias and more. Paul likes unique plants and showed me his Chinese perfume plant, Ylang, Ylang, which would bloom with a fragrant chartreuse flower later in the summer. He gave me a taste of his Parcel (combination of parsley & celery flavors) herb, and a mushroom flavored herb.

He grows a popcorn plant and succulents. He showed me a feature article done by Ohio Gardener magazine about his garden. The photos show the extent of his gardening skill as the plants I was looking at in early June would grow to fill in every nook and cranny in his garden. It was marvelous, it was beautiful in every way. Gardeners are generous in every way.

Germantown was settled in the early 1800’s when immigrants found their way here bringing with them their love of small brick houses, nestled closely together, their beer brewing skills, sausage making and a love of gardening. Anti-German sentiments after WW1 & WW2 were significant but the community identity and spirit is thriving today. There are many lovely small gardens in the area though the lot size limits what can be done.

Community parks offer more green space and Paul directed me to Fetch Park, a small community garden space which is cared for by the local garden club of which he is a member. Things grow splendidly in Ohio, though the winters can be harsh when the sun comes out in the spring the gardeners set to work. The beauty that can be achieved is certainly evident in Paul’s garden.

Here are some other great elements in Paul’s garden.

This was a wonderful visit for me.  We walked by this garden on our way to dinner the night before.  The next day as we were leaving we drove by again and had the great fortune to see Paul working in his garden.  We parked illegally, and I ran over for a closer look.

I’ve found a video of Paul’s garden when it is later in the season, less than 2 minutes if you want to take a look.