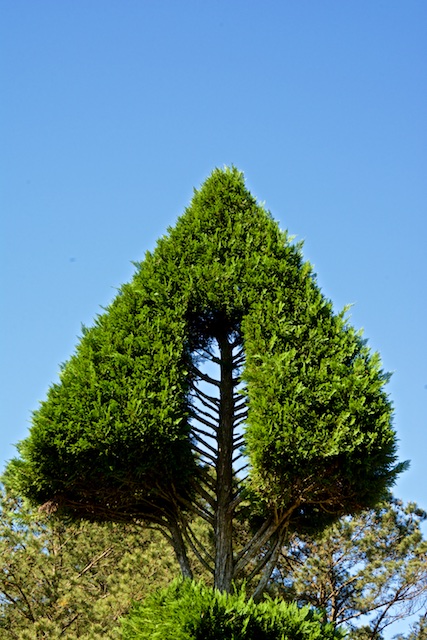 In 2006 PBS showed the documentary film “A Man Named Pearl.”  The film was about a topiary artist’s garden in South Carolina.  Seeing the film made a lasting impression on me so much so I recently headed to Bishopville to see Pearl Fryar’s topiary garden.  Arriving at his home there are no gates, no posted hours, just a welcome sign with a donation box.  A homemade kiosk holds a small brochure with information about the garden.  Rich and I walked right into Pearl’s garden, and by the end of our visit we had met Pearl, wandered through his garden and left feeling grateful and inspired.

In 1981 Pearl wanted to do something special in his yard so he could be in competition for the “Yard of the Month” award.  He saw a pom-pom evergreen at the local nursery and asked the owner how that was done. Pearl received a three-minute lesson and from there he went back to his house to give it a try.

Pearl has now been cutting up bushes and trees for over three decades. He doesn’t create animal shapes or formal geometrics instead he does abstract topiary.  Pearl says “the plants are his canvas” and while he likes some varieties better than others, he really just wants to see what he can create.  He has saved many a plant from the castoffs at the nursery.  He has patience and talent.  He is quite comfortable planting a bush or tree and working on it for 5-10 years before it becomes a work of art.  He doesn’t work from a drawing but sees the structure of the plant as the key to how it can be shaped.

Tall, slim and strong, he works atop a 20’ ladder with his hedge trimmer and clippers shaping his creations.  He has a row of sailing ships, a fishbone tree, mushrooms, words, and more. He wanted to be creative, and he wanted to make a difference. He would come home from his day job (12 hour shifts, four days a week) and work on his plants late into the night using spotlights to see.  As his work began to attract attention he received advice and often skepticism, “you shouldn’t be able to do that to that plant.”   He had no horticulture background, and…he won the “yard of the month.”

Completely self-taught, he has become a local legend with appearances on HGTV, Victory Garden, CBS Sunday Morning, and Martha Stewart.  He has spoken at Harvard, and for many other audiences in the past decade.  Pearl tells his audiences, especially students, that “everyone has a talent and that talent may not show up on a test paper.  But with hard work, passion, and marketing you can be somebody.  You can be somebody who provides for your family, be positive thinking and you can make a difference in your community.”

His three-acre garden of 400 topiaries is internationally known and each year nearly 10,000 visitors come from all over the world.  Pearl retired in 2002 and he and his wife, Metra, continue to live in their home surrounded by his garden.  Up and down his street the neighbors have joined in the creative venture and topiary is everywhere.

Pearl, at 76 years of age, continues to work on his garden.  He is recognized as a sculpture artist, using plants as his medium.  South Carolina State Museum has his sculptures on their lawn.  Art students from Coker College come to his garden with their instructor to learn to see and draw curves, lines, and dimension.

Pearl says he got in trouble in grade school for trying to be creative.  At age 40, after college, participating in the civil rights movement, a hitch in the army, a member of the Woodstock generation, and working a good union job he could finally afford to be creative. He believes life is about sharing and he eagerly shares his garden with visitors.  He intended this garden to just be his lifetime project but his work has achieved such accolades that the Garden Conservancy has designated the garden for preservation.  Visitor donations have flowed in steadily and his supporters and friends organized to help with the garden.  Pearl believes in encouraging potential, and through a non-profit foundation provides scholarships for C students, educating from the bottom up. The foundation also provides funds for an assistant to help Pearl in the garden. All the plants need a haircut every 4-6 weeks.

Pearl told us a story of a small bus load of visitors from San Francisco arriving at the garden one day.  After touring the grounds and talking with Pearl, they were preparing to leave. Pearl was setting up one of his tall ladders to continuing trimming.  One of the visitors worried aloud “he’s gonna fall off that ladder and break his neck” Another ventured that “he needed a man lift,” Pearl agreed that would be helpful, the visitor asked “how much would that cost?”  A few minutes later the bus load of visitors had committed $25,000 to buy Pearl a lift. He and his garden are that inspiring.

Pearl wants visitors to leave feeling better for having visited the garden.  Long inspired by words, he includes favorite quotations throughout his garden.  He was inspired by a phrase he saw years ago in a garden in Korea while he was in the army there, “He or she that does no more than the average will never rise above the average.”  So he has “created something special that makes people feel good.”  Love is an important element in his garden and in his life. He has “Love” sculpted in bushes, in signs, and sculptures.  He has “Love, Peace and Goodwill” four feet tall cut into the lawn,

Pearl says “all I do is cut up bushes, I let people decide what they see.” We left the garden, loving what we saw, walking peacefully through this beautiful garden and feeling so good about all the potential talent Pearl inspires.

In the center of the front yard Pearl created his address 165 in perfect topiary form, after growing those numbers for 14 years, the county realigned the street numbers and changed his address.  Now he says “165 is just a yard decoration, and his address is on the mailbox”