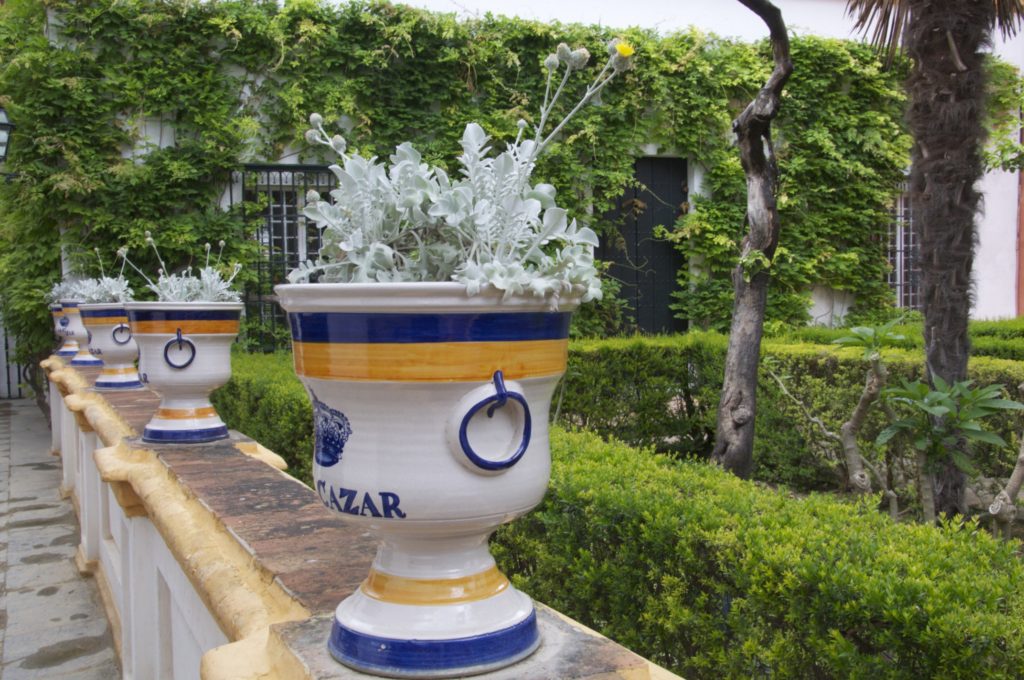 I became impatient listening to the tour guide explain 700 years of Spanish history.  Already I calmly sat through a long bus ride from the port of Cadiz to Seville to get to the Royal Palace Gardens of Alcazar.  I wanted only to see the garden.  So. . . . I slipped away from our tour group. 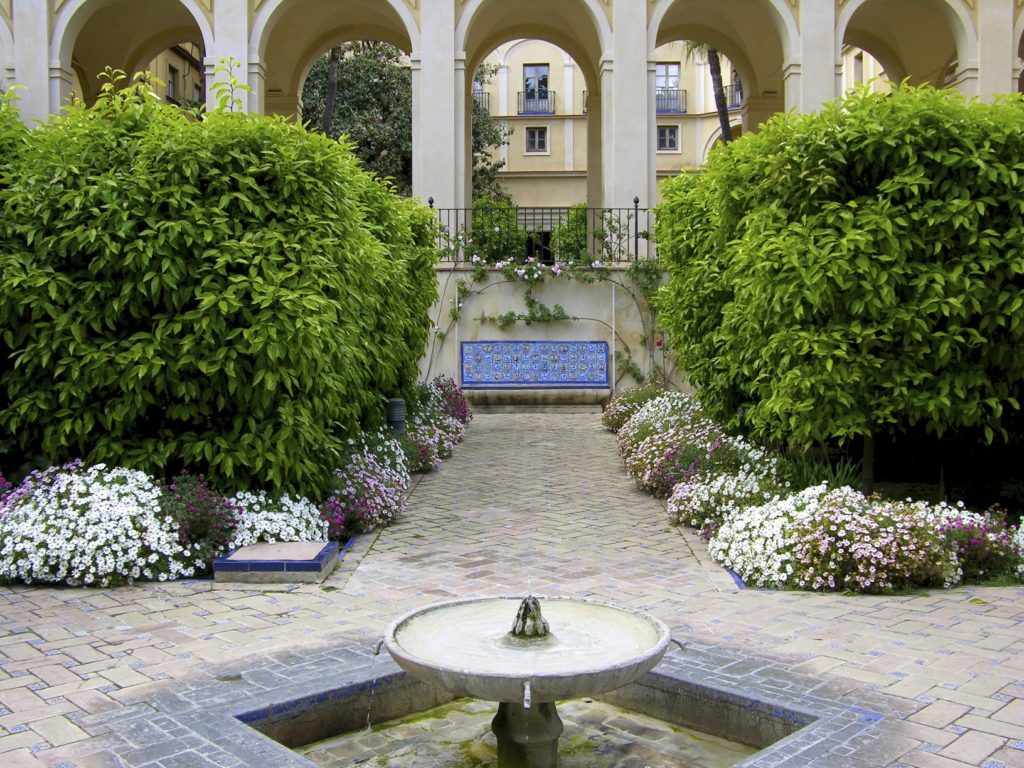 I found a courtyard with clipped myrtle hedges, framed by tiled archways, a terra cotta fountain splashing into a fish pond.  Another courtyard had tiled benches and a stairway lined with pots of rosemary leading up to a second level. The passage-way covered with vine created a shady walk and following this I easily returned to the entry hall, rejoining the group. 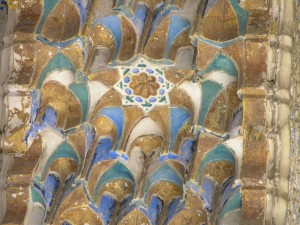 The tour guide was explaining the patterns of the tile work, illustrating its lack of symmetry due to the Islamic belief that perfection in symmetry challenged the perfection of God.  I could not stay and listen.  Alcazar illustrates significant history in garden design.  It began in the 12th century when Arab princes conquered Spain. Alcazar began as a Paradise garden for the royalty and an ostentatious symbol of power.  In this climate, controlling the water supply was the most powerful control of all life.

Years later when the Catholic King reclaimed this area of Spain he expanded the gardens keeping the talented Arab gardeners employed. A typical English garden and maze was integrated into the overall scheme in the later years of the garden’s design. 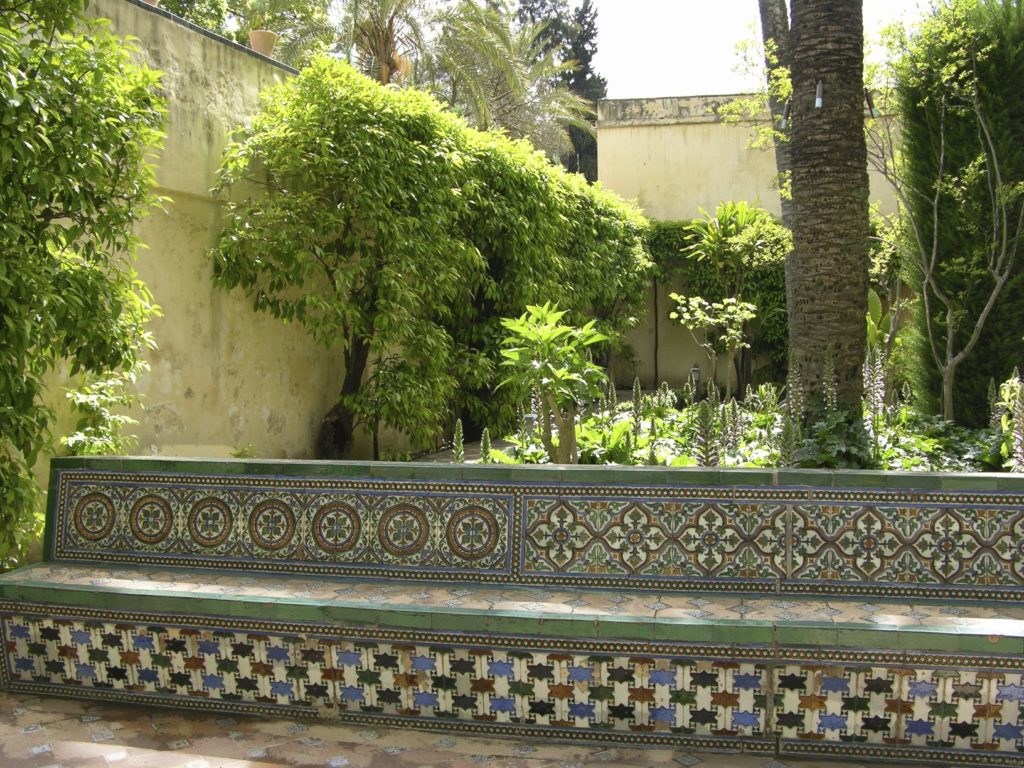 I wanted to see it all. The guide stayed in one place and kept talking and talking! I knew our time was limited.  This is a garden with so much to discover that it needed an entire day.  I went back out hurrying down paths going in all directions, stealing through multiple courtyards, tiled archways and finding extraordinary sights.   A lava rock fountain with moss and ferns was centered in a courtyard pool.  Long paths with palm trees and angel trumpet shrubs lay further out than I dare go. Designs using a circle within a square were repeated throughout.  “The circle in a square is the most meaningful shape of all in Islamic art: it represents heaven brought to earth and earth reflecting heaven, within a perfect and sacred geometric form.” (Sun-Drenched Gardens, Lewis & Smithen) 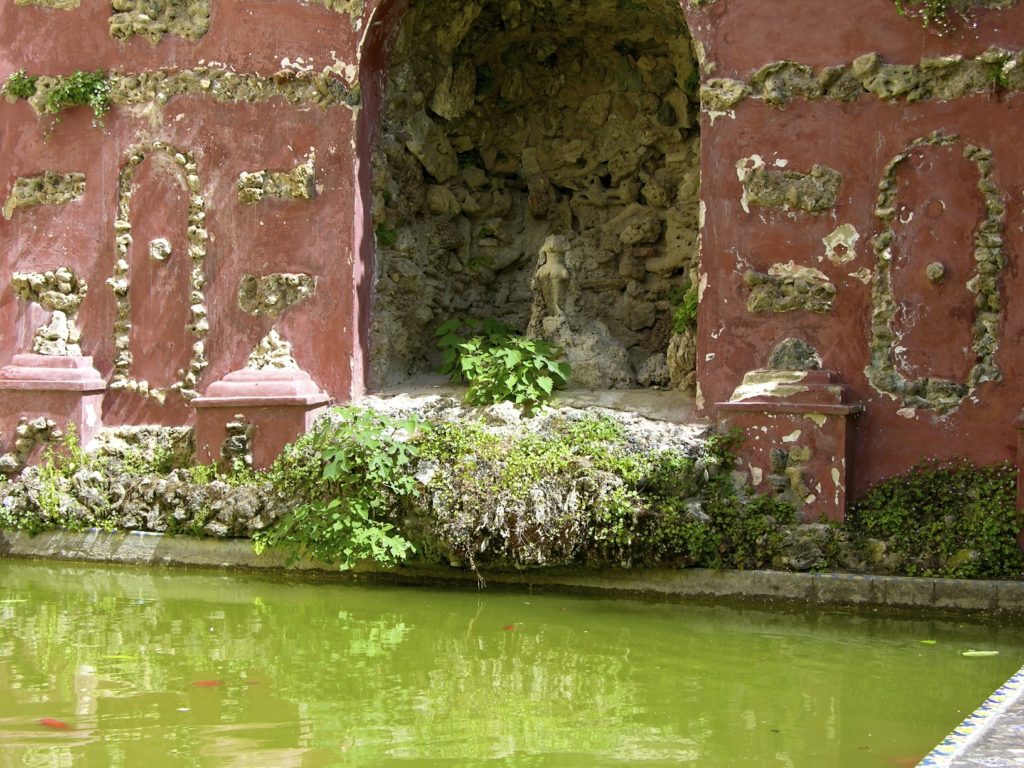 I went back to find my tour group, but it was gone! I followed another group hoping it would follow a predictable tour path.  It led to a huge pool with cascading water coming from the 2nd floor of the palace. Grand plumbing skill courtesy of the early Romans was still in use here.

Beyond the pool and down below was a formal garden of hedges, more palm trees and elaborate wall decorations.  But there was so sign of my group.  I ducked into some side rooms where there were displays of tiles used throughout the garden.  Tiles were originally used to decorate the walls because the Islamic religion “forbids the representation of living forms to decorate dwellings, furnishings, and even gardens. So the early Arabic garden-makers employed colorful tiles to emulate lower color, and wrought-iron filigree to suggest trees and shrubs.” (Sun-Drenched Gardens, Lewis & Smithen)   The conquering Catholic King liked and kept the existing tiles and added  blue and white tiles of lions, a symbol of Christianity, to decorate the courtyards. The entire garden is a melding of styles, religions, and garden fashion.  It is easy to get lost in the design styles of the garden.  It is easy to get lost from your group.

I found the exit, but no sign of my group. I walked out on the street. No one familiar could be seen.  I walked back in but was stopped by a guard sternly telling me I could not re-enter.  I explained I was separated from my group.  He shrugged and let me pass. I went into the gift shop. There are almost always stragglers from a tour hurrying with last minute shopping and there were. Not a single shopper from my group was there.

I started to worry.  I went back into the garden, to the main pool.  I turned back toward the the dark passage way leading to the exit.  Surrounded by people I heard my husband call my name. He too, had lagged behind in the garden and when he caught up to our group and discovered I wasn’t there he came back to find me.   Now to find our way back to the bus on our own through a maze of streets, dodging around groups of other tours, and local shoppers in the Old Jewish quarter of Seville. We ran!