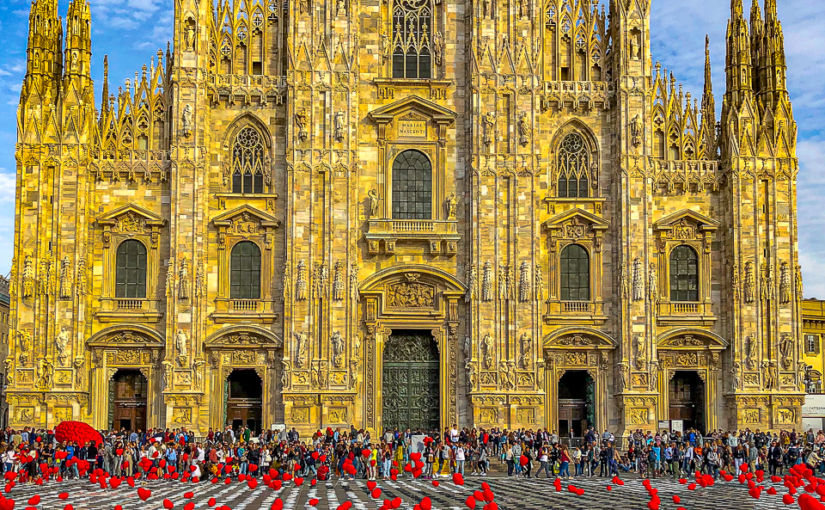 Exploring this major Italian city delivers an absolute feast to indulge your taste for travel delights. You can window shop the high fashion scene under the glass dome of the Galleria Vittoria Emanule II, dine in elegant restaurants, and see the best of Leonardo’s work.

Walking about the city, you can gaze wide-eyed at the showpiece of Renaissance architecture known as the Duomo (cathedral) and be nearly blinded by the glistening modern architecture in Porta Nuova, known to be the wealthiest business district in Europe.

Due to the extensive bombing of Milan during WWII, new modern style buildings are sandwiched between older buildings that survived and continue to stand today.

The financial influence of Milan is considered comparable to Manhattan, NY. There is so much economic power in this city a contest was held in 2009 to find the most appropriate statue to represent the financial district.

The winner; a middle finger salute, suggesting those with the money don’t care about those that don’t have it. There it stands in front of the Borsa Italiana, (Stock Exchange) made of beautiful Carrara marble, 36′ tall, said to be flipping off the 99%. Here is a city worthy of serious exploration.

The city’s architecture captured my attention. Milan has been called the gray city due to the influence of rainy weather and gray architecture of the fascist period, but it is rebranding itself as a green city. It is tough to comprehend how a city rebuilds after the devastation of war, but Parc Monte Stella is a visible example.

The park surrounds a large hill formed from tons of war rubble, building materials of steel, concrete, and such brought here as the city was cleaning up from the war. Today the hill is covered in green grass with tall trees and walking paths. While I visited, carefree young boys rode their mountain bikes up and down this now disguised painful memory.

The site of an old Alfa Romeo factory, once a thriving business, then abandoned is now Parc del Portello, a modernist style landscape of interlocking walking paths and terraced plantings surrounding a small pond.

It is a large green space surrounded by gleaming modern architecture and high-rise residential property.

The most dramatic example of greening the city is the Vertical Forest. Designed by Italian architect Stefano Boeri “consisting of two residential towers, the largest 26 floors (110 meters) and the smaller tower 18 stories (76 meters.)”

Each of the 400 condominium units has a cantilevered balcony designed to bear the load of extensive plantings. The buildings were completed in 2014; I visited in October 2019. It is a shocking sight to see plants growing up, out, and over the facade of high-rise buildings.

We are accustomed to the mirrored glass and steel style, reflecting the sun and the surrounding structures. We are comfortable seeing small balconies with a few pots or window boxes. Here you see masses of green shrubs and trees in shades of green with red pomegranates and pink hibiscus scattered throughout. Aerial arborists keep the plants pruned; watering and fertilizing systems keep them green.

The look is not symmetrical and tidy but wild– like a forest.

The condominium units are providing self-sufficient renewable energy from solar panels and filtered wastewater to sustain the buildings’ plant life. The green technology systems will reduce the overall waste and carbon footprint of the towers. Boeri advocates the urban environment will benefit from the power of trees to reducing air pollution, heat island temperatures, create microclimates, plus fostering homes for pollinators, insects, and bird species. The two buildings “host 800 trees, 4,500 shrubs, and 15,000 plants from a wide range of shrubs and floral plants distributed according to the sun exposure of the facade. In addition to evergreen species, deciduous specimens include beeches, yellow acacias, oaks, maples, ash trees, ferns, and ivy.” https://www.greenroofs.com/projects/bosco-verticale-vertical-forest-milan/

The weather in Milan is quite variable; hot and humid in the summer, snow in the winter, creating even more challenges for the plants living in minimal space.

The adjoining Library of Trees, a 40 acre (160,000 square meters,) multipurpose urban park provides open space for the high-density project. Yes, it is expensive, exclusive, and experimental. Yet it also is an idea that Boeri is promoting as a piece of the solutions needed to accommodate climate change challenges cities around the world face. Projects are in development in China, France, and the USA.

My accommodations in Milan was an Airbnb apartment right off the Duomo square. It was pretty swanky, in an eight-story condominium building with underground parking via a lift, a rooftop garden, and a vertical garden in the interior courtyard.

Empty boxes went back up. This activity continued for quite some time. I dashed downstairs to see what was on the ground. There was a crew with a dump truck, a lift truck, and workers stacking and emptying the debris from the rooftop garden, which was clearly getting a redo.

Here was an entire system designed to manage landscaping in an urban setting. I garden on flat ground; those tools and equipment are familiar to me. Lifts, dump trucks, cranes and aerial arborists I’ve discovered, are part of gardening too. The possibilities are exciting. It requires optimism, prioritizing trees, plants, and wildlife to help make life sweeter for humans living closely together in high-density cities and building habitat for the wildlife sharing the planet. Things are looking greener in Milan, and the same could be coming to a city near you.

You can read more about  Stefano Boeri here