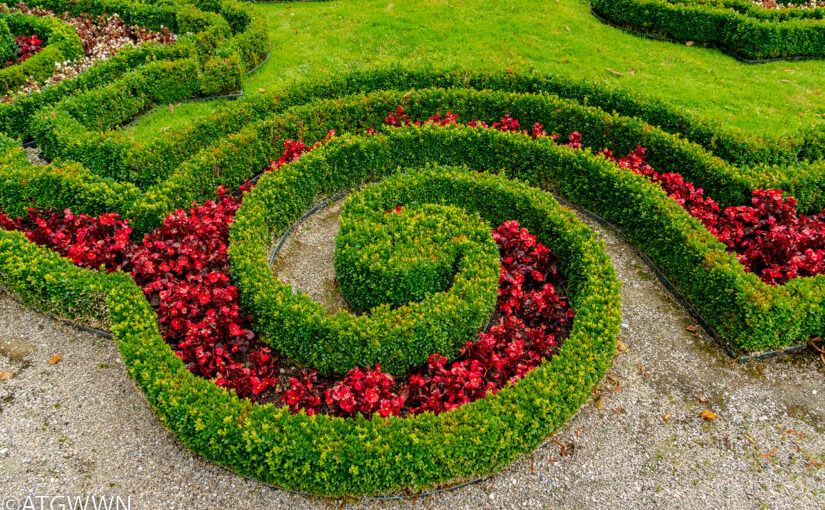 Our visit here was on a misty day with layers of billowy clouds backing the snow-capped peaks and pine forests surrounding the garden. The palace and reflecting pool are on the valley floor. Visiting here requires a “climb every staircase*” & “search high and low” commitment to experience the garden’s water rills, pools, fountains, and sculptures.

The garden is laid out with a central axis connecting a music pavilion at one end and a rotunda featuring a statue of Venus at the other. Climbing to each point provides clear views of alpine meadows and forests and all the glitter of the gardens below.

Deep green hornbeam hedges wall the east and west sides of the palace’s formal parterre. Bright red begonias grow among the boxwoods planted in a bed shaped like a Bourbon Lily. The gardens are accented with gold statues and black urns; it is a genuinely magical wander around this garden.

Ludwig was the patron of the composer Richard Wagner, and he built the Venus Grotto to stage Wagner’s operas. He installed electric lighting for the staged performances in a watery underground cave. Ludwig was the only person in the audience during the productions. The Grotto is currently under restoration and is scheduled to reopen in 2024. The project was funded for 21 million euros but has now ballooned to 60 million and is expected to take ten years to finish.

King Ludwig II reigned from 1864–1886 as a constitutional monarch without authority but with a bulging purse allowing him to live a private fantasy life.

He built four palaces, including Neuschwanstein, which inspired Walt Disney’s, Cinderella Castle. Linderhof palace was initially planned to be his mini Versailles. The valley site proved too small, and his garden designer Carl von Effer abandoned the project and moved to Ludwig’s new palace project Herrenhiemsee.

So Linderhof is Ludwig’s “not good enough” garden. Before his Herrenhiemsee Palace was finished, Ludwig ran out of money and died under what historians say were “mysterious circumstances.”

Bavaria is a spectacular place to visit, and it will inspire you to dream of “climbing every mountain.”  Linderhof was my first experience in Bavaria’s gardens, and I dream of returning  “to search high and low “ in this magical place. 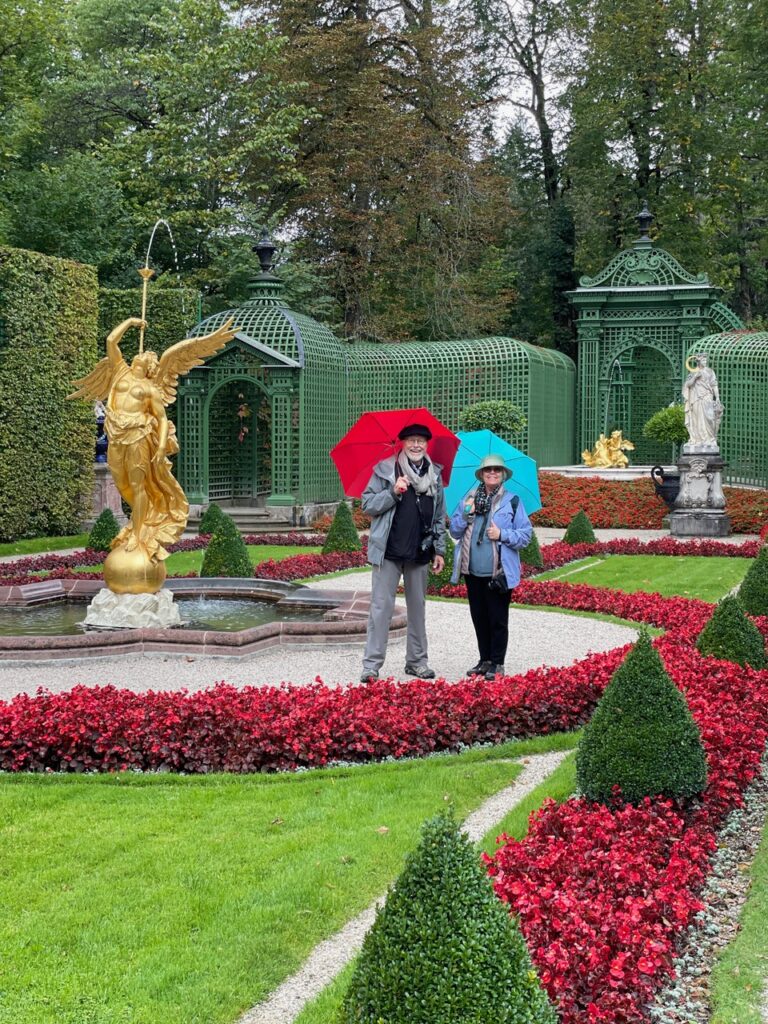 *Bavaria Inspired me to recall the lyrics of “Climb every Mountain,” the 1959 musical Sound of Music

9 thoughts on ““A not good enough garden” Linderhof Palace”