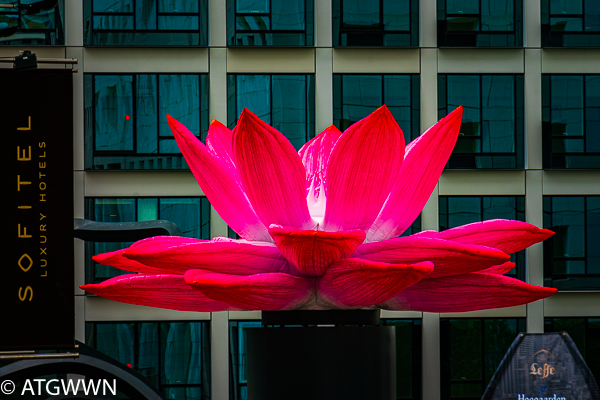 Ask just about anyone in Paris how to get to the Arch, and they will quickly direct you to Arc de Triomphe, even if you specifically ask for the Arc of Defense. Visitors to the city of light focus on the iconic memorial commissioned by Napoleon in 1805 to celebrate his victory at Austerlitz* but my destination was the Arc of Defense.

Paris welcomes visitors to their great city and is proud of their Renaissance Kings who fancied building castles with Baroque style domes, swirls, and gilded features. Just a few days of touring all this great historical art, it can seem as though there is no straight line in French design.

The Arc of Defense is the modern bookend of the historical east-west axis that runs from the Louvre along the Champs-Elysées to La Défense. Here is the modern public space of Paris’s central business district.

In 1984 French President Francois Mitterrand commissioned the building of a modernist project to commemorate the 200th anniversary of the French revolution. The competition garnered over 400 entries and Danish architect Johann Otto von Spreckelsen was awarded the design commission.

The Arc of Defense brought in lines of modern design. It is enormous, “standing a height of 110 meters (361 ft) and a width of 106 meters (348 ft). The sides are 19 meters wide and contain offices and conference rooms. it is twice the size of the Arc de Triomphe, and its archway is large enough to fit the Notre-Dame Cathedral.” (http://www.aviewoncities.com/paris/archedeladefense.htm)

In the center is a cloud art piece installed to break up the wind tunnel effect and an elevator shaft which transports visitors to the observation deck on top.

Walking this promenade what I noticed immediately was the grand wide stairs leading up to the viewing platform of the arch plaza. The staircase is an architectural star, populated with people enjoying their day, the view, the weather, and each other; it is perfect for gathering. We climbed up and took the elevator to the top to see the whole of Paris. The view below looking toward the Lourve opens to a landscaped public space filled with art and Parisians.

Offering a 360-degree view from on top you can see down the Champs-Elysées to the Arc de Triomphe. And it is this walk, from Defense to Triomphe that is a new space to explore.

As with any high-rise business center, the offices are busy with people; some estimates are up to 300,000 workers. Lunchtime on a sunny fall day brought them outside. There are multitudes of places for people to enjoy the out of doors thanks to modernist landscape architect American, Dan Kiley, (1912-2004.) Kiley won the competition to design the 1/2-mile corridor in front of the Arc to create a people-friendly and welcoming landscape. Dan Kiley studied landscape design at Harvard but left to explore the French gardens designed by André Le Nôtre and his work of the 17th century.

There is much of Paris history where ordinary people were excluded from the castles with the ornately decorated rooms, gilded gold, and surrounding lavish gardens. Kiley looked at Del Norte’s garden design elements and modernized them, making the same intimate spaces available to everyone. The people filing out of their offices today to enjoy lunch alongside the water, sharing a table with friends, are reading contemporary literature rather than Greek mythology. This space welcomes them. Rather than marble statues of Greek heroes, here is contemporary art. 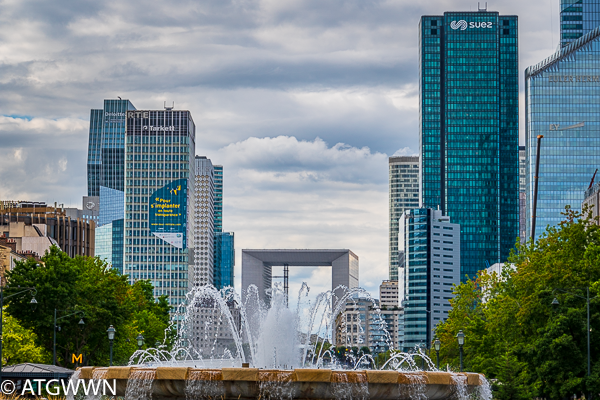 Dan Kiley’s contemporary contribution to Paris is alive with activity. Alongside the reflecting water pools, locals were eating lunch, playing boules, and reading in cafes, on picnic tables, benches and small surround walls perfect for perching. The water features with colorful geometric shapes and an intermittent mist provides atmosphere and cooling on a hot day. 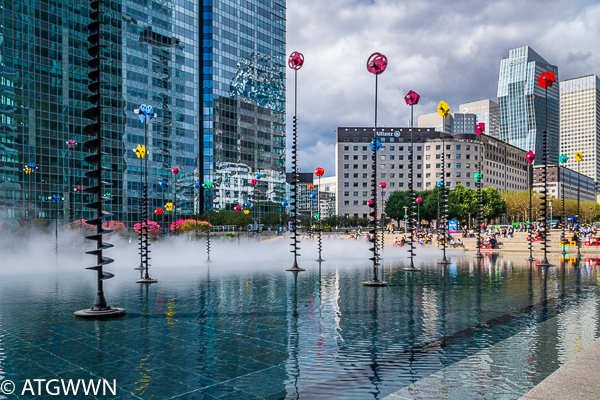 The half-mile-long axis with garden rooms along the way was designed in a modernistic landscape style. 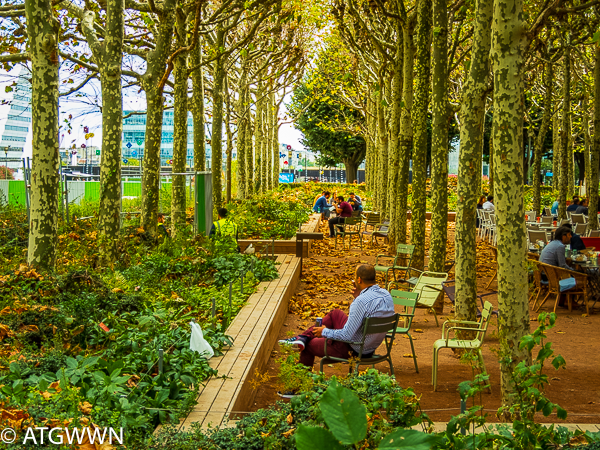 Just look at these garden spaces; small, lush, and inviting in the middle of this great city.

Contemporary building permits in Paris require 2% of construction costs allocated to public art. So as the high-rise buildings rose around the Arc, it became a contemporary outdoor art gallery. Color, line, and design are everywhere. There is Joan Miro, Calder, and many more.

Smaller art exhibitions change in the space. During our visit, we walked through a series of photographs of faces contorted by high volume blasts of air. Further along, a giant playground swing resonated with passers-by.

Since Kiley’s design was installed, other elements have been added. Controversy always comes in to play and rightly so as Kiley’s grids of singular trees were one of his distinctive marks. When years later a small garden was installed within the promenade, with flowering crepe myrtle trees they were seen as an affront to the original design. Yet when you are there in the space, it is a pleasant sight.

Kiley is a fascination to me as I have seen his work in other areas. You may have too, as he designed the St Louis Arch park area, though it has not been maintained as designed. He designed the landscape of the Miller house in Columbus, Indiana, considered by landscape architects as perhaps the most important postwar garden in the United States. He did landscape design for the Air Force Academy in Colorado Springs, Colorado.

I’ve visited many gardens in France, some gilded in gold, some a lush green, others with fanciful flowers. This walk in a contemporary space seems to bring gardens to life spanning generations and lifestyles. Here the garden is enjoyed by the young, the old, the local, and the visitor. The best of the historical gardens brought into the present, and it is all connected by garden design.

*Battle of Austerlitz If your knowledge of this period of French history is as weak as mine, from Wikipedia: In the battle of Austerlitz, Napoleon Bonaparte fought Russian and Austrian troops. The battle took place near Austerlitz in1805. Napoleon won. The book War and Peace by Leo Tolstoy contains a detailed description of the battle. The place is now in the Czech Republic

**Pollarding, the trees are cut back nearly to the trunk, to produce a dense mass of branches and to keep them to size for the area. 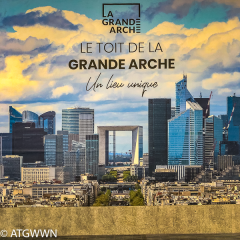 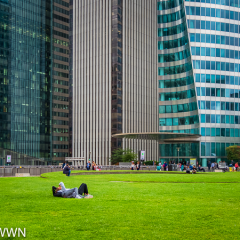 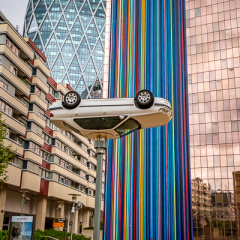 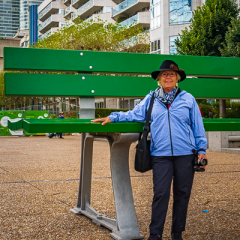 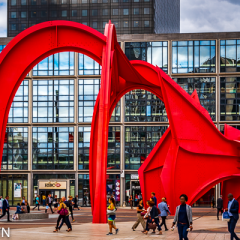 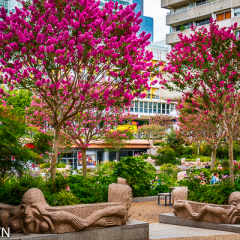 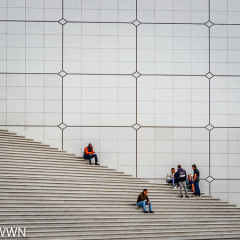 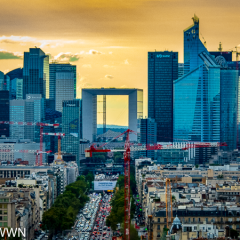 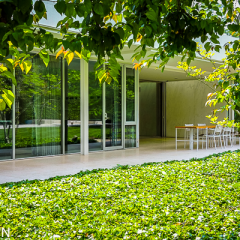 6 thoughts on “An American Landscape Design in Paris”