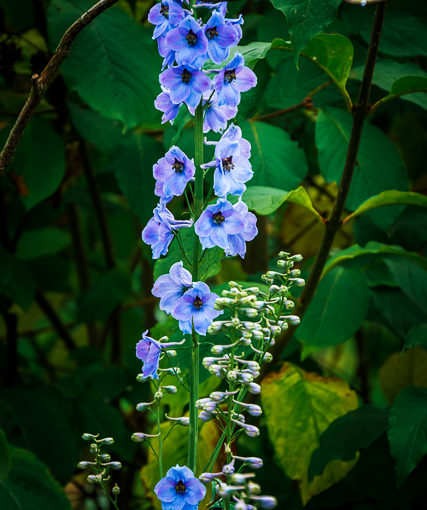 Do you remember what you were doing July 29, 1981?  Perhaps you were one of 750 million people gathered around a television to witness the wedding of Diana to Prince Charles. I was watching. Fast forward to 1996 when their divorce shredded my belief in a Cinderella story. I admit to holding a grudge against Prince Charles ever since. Still, when presented with the opportunity to tour his Highgrove Garden I leaped at the chance.

As required, I made a reservation, arrived 1 hour early, followed specific directions for the carpark, presented my passport, turned off my cell phone, stowed my camera, and promised to follow closely at the heels of our 80-year-old guide, John Alymar, for the next two hours.

Highgrove is the private residence of TRH The Prince of Wales and The Duchess of Cornwall, near Tetbury in Gloucestershire England. The garden is his refuge from a very public life.  Here he digs, plants, designs, weeds, and wanders among the trees and flowers, perhaps talking to his plants as he was at one time publicly ridiculed for doing. In an introductory video, the Prince welcomes we eager visitors and speaks of his willingness to share the results of 35 plus years of organic gardening. He speaks of his aim “to create a space which will please the eye, warm the heart, and feed the soul.”

My grudge against him immediately began to soften because truly what else is a gardener to do?

Naturally he has help with his garden, the head gardener is Deb Goodenough, (yes, that is her name) and she is more than good enough to supervise a crew of 12 gardeners, in caring for (by my count) 12 distinct gardens. Our guide, John, says the HRH’s favorite color is mauve and he particularly likes it in Hydrangeas.

The annual flowers in the Sundial garden are in a palette of blues, pinks, and purples.  A variety of favorite English flowers such as delphiniums, roses, jasmine, clematis, wisteria, and English Ivy fill the pots and beds. Well, I like all of those colors and flowers too, so we have that in common.

One of the areas I was eager to see is his Stumpery which he created in 1980. You see, the Prince likes to recycle stuff. He appreciates the beauty of nature, craftsmanship, and thriftiness, seriously. So when a great storm upended a swath of grand old Chestnut trees, he saw the potential for stacking the roots, to create a wildlife haven and a place for growing hostas and ferns.

Stumperies were popular in the Victorian age when ferns were one of the most popular plants in England. I had read about his stumpery and previously visited several in North America. The first time you see one it is truly amazing. This stumpery is superb, all green and lush, with ferns growing from the decaying wood. The visible architecture of grand tree roots displaying the symmetry of the rooting structure is an artful touch.

Within the stumpery is a thatched roof tree house where Harry & Wills played as little boys. The Prince receives many commemorative and ceremonial mementos, such as sculptures, plaques, vases, and in the Stumpery he has a Wall of Gifts, designed to replicate a Greek temple. It is hard to imagine how many items he has received over the years and what an inventive idea to create* such a display in a special corner of his garden.

There is a one-acre kitchen garden, orchards, and thousands of trees. One tree was specifically pointed out to us and that is Prince George’s Poplar tree which Grandfather Charles planted with the help of the little prince. There is a four-acre wildflower meadow which flowers in spring. Over the summer the grass grows in the meadow and in the fall a herd of Shopshire sheep come in to graze, till, and fertilize to ready the wildflower meadow for the next spring. An inscription in a stone doorway written in Egyptian hieroglyphics translates as “The flowers in the garden are a reflection of the stars in the sky.”

One of the most famous elements of the garden is the Thyme Walk that leads into the garden from the back of the house. Again, Charles is not one to throw things away so when he moved in there was a walkway defined by golden yew. He gave his gardeners free rein to shape them into interesting geometric shapes. Planted underneath are twenty varieties of creeping thyme which release their fragrance when walking down the pathway. It is a unique and beautiful garden feature. We didn’t get to walk that path but suddenly from behind a shrub, a photographer popped out to take our photo as a souvenir of our visit.

The prince has his own private stone sanctuary, obviously, a step up from a she-shed many gardeners hope for. He has the only key and here he slips away for reading, meditation, and privacy. He has no shortage of critics, no small number of questions regarding the existence of a monarchy in this day and age. But I will tell you this— I believe he is really a gardener. This garden is a creation of exceptional beauty, created with a deep reverence for the soil, the trees, water, and clean air. Yes, he has help, he has an unlimited budget for seeds and such, but I think he really loves his garden, he knows his garden, so we have that in common.

Happy and delighted to have seen such a remarkable garden I went to the tea room where I shared with my own Prince Charming a slice of Victoria Sandwich cake with a cup of Highgrove Organic Earl Grey Tea.  It was a really princely day.

*The Prince has brought together some of the great contemporary garden designers for developing Highgrove. He worked extensively with Julian and Isabel Bannerman.
The Prince’s charities include the School of Traditional Arts; many elements have been made for the garden from the students.
The Wildflower Garden was a collaboration with Miriam Rothschild, a renown wildflower expert.
Many other design elements were done in collaboration with Dowager Marchioness of Salisbury. Lady Salisbury, now 86, has been a keen organic gardener for over 50 years. The Kitchen Garden which supplies the house with fruits and vegetables was one of her projects.
Sources:
Highgrove: A Garden Celebrated, photographs of the garden, illustrations of some of His Royal Highness’s watercolours and commentary by HRH and Bunny Guinness.
The Royal Gardens at Highgrove, ©A.G. Carrick 2015
Highgrove Garden website
Tour Guide, John Alymar, my notes from our tour

The Prince of Wales takes Alan Titchmarsh on a tour of Highgrove House     In this video Charles alludes to the idea that he hides behind the curtains as visitor wander by so he can hear their comments.  So like all gardeners he hopes visitors will like the gardens. So you have that in common with His Royal Highness.

11 thoughts on “Highgrove, A Royal Garden”