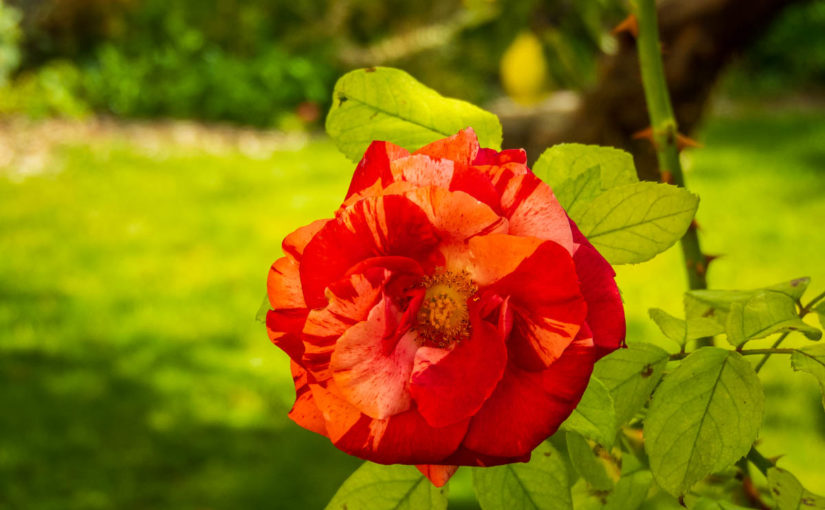 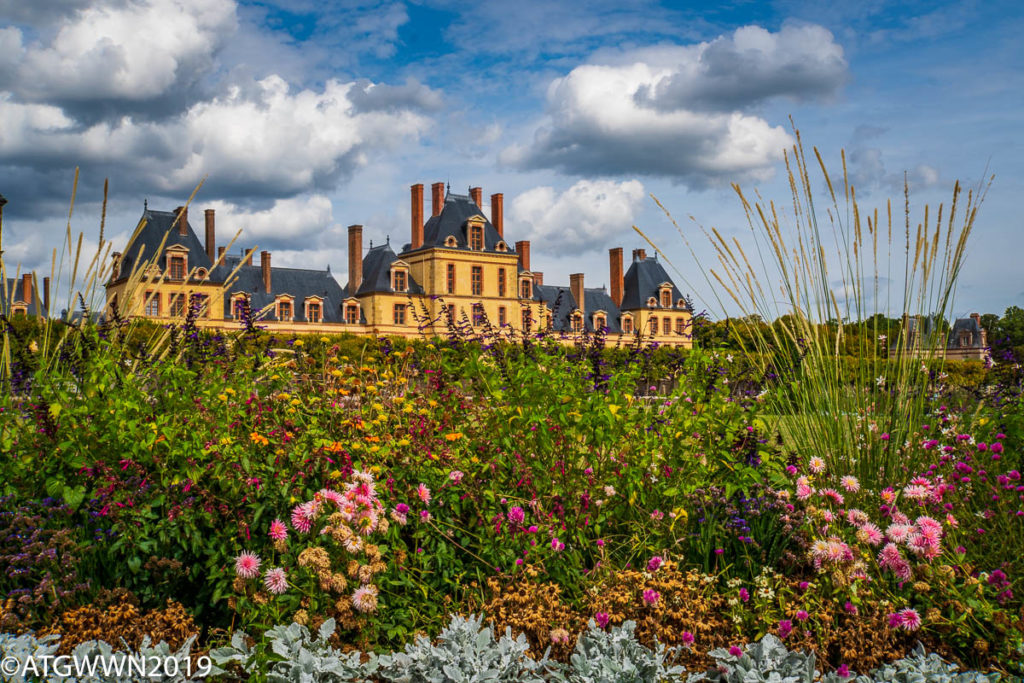 Fontainebleau, home of French Royalty for over 700 years, including a series of Louie, Louie, Louie’s, Emperor Napoleon, Josephine, and more survives as an architectural and artistic history of France. There are 1500 rooms, w/ marble halls, gilded ceilings and paintings larger than a two-car garage door. I’d always heard of this place, I’ve seen the view of the grounds from the sky while watching the Tour de France.  It is magnificent. 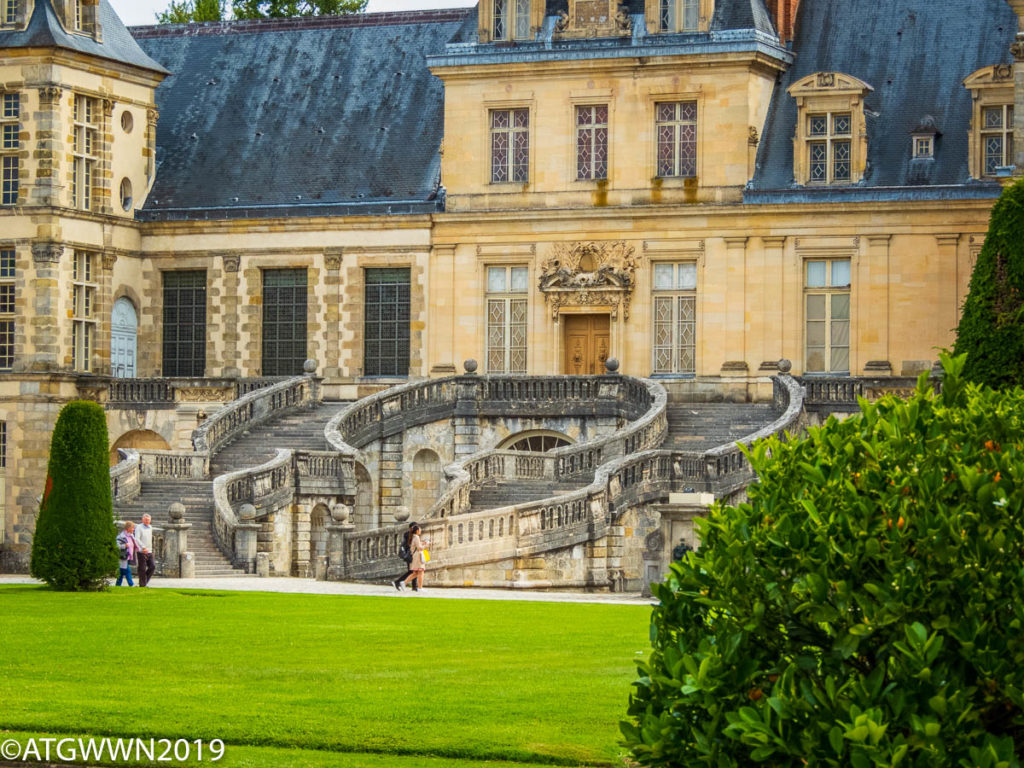 The famous double staircase is a historical architectural feature built during the reign of Louis XIII (1610-43) by Androuet du Cerceau. The staircase leads to the entry of the Chapel. Since the French Kings saw themselves as God, I suppose guests who were invited to arrive at this grand stair would be expected to worship the King. The enormity overwhelms you. 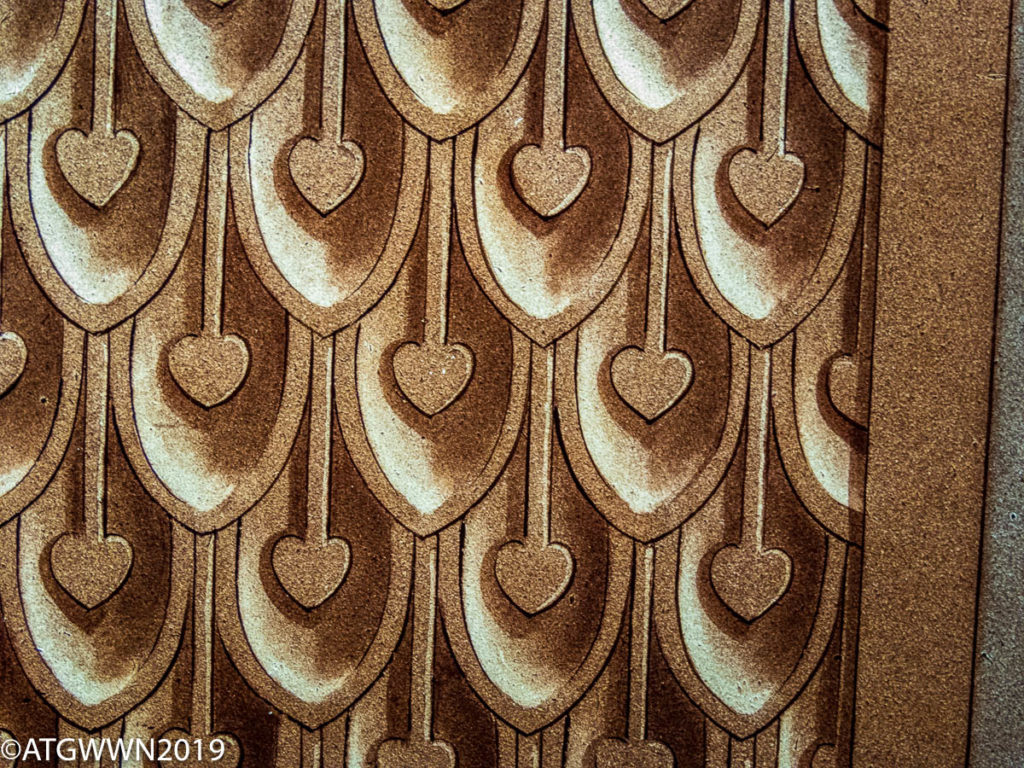 It helps to focus on the tiny decorative features such as these tiny carved hearts and the colors of the cape in yet another portrait of someone obviously famous but unknown to me.

The lake in front of the castle has a small pavilion that seems to float on the water. Louis the XIV had this built. Accessible only by boat it was large enough for dinner parties and gave the guests a grand view back toward the castle. 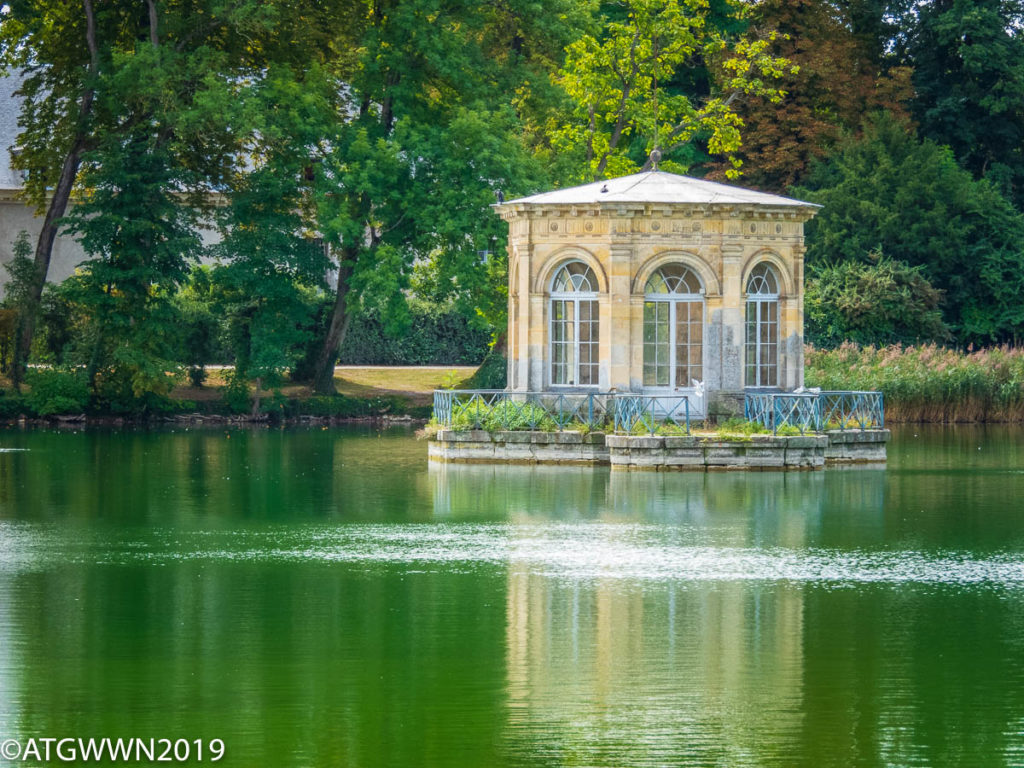 Renovated and in good condition now, it glows in the afternoon sun.

I was here to see the garden and a wander around the garden borders of summer flowers including dahlias, heliotrope, zinnias, gomphrena, surrounding a square reflecting pond and grass parterres. The siting of the castle, which was added onto over the centuries, doesn’t feature great views of the garden. 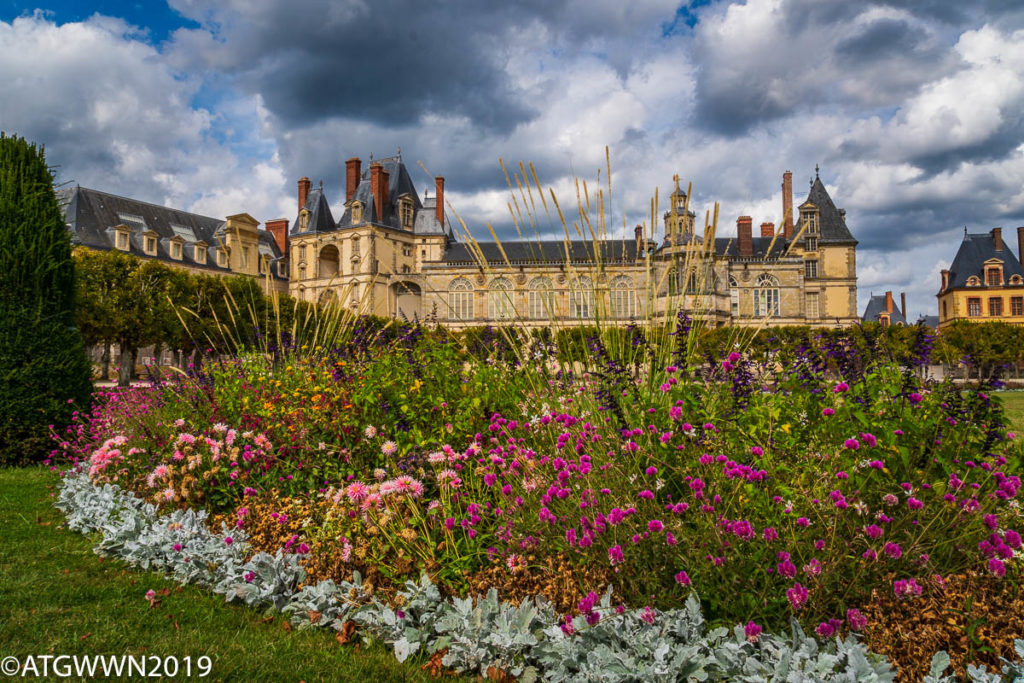 I’m glad I saw it, it has a history of the centuries reflected in its halls. The garden was not the most significant feature. The forest of Fontainebleau was the prime feature, hunting the major pastime and the game ended up on the dinner table. This was not the era of grazing cattle herds. Venison, rabbit, and pheasant were the idea of a grand meal. There is much to be learned from history, some of it painful. Preserving it is a real financial burden but also a piece of the life and beauty of another time. 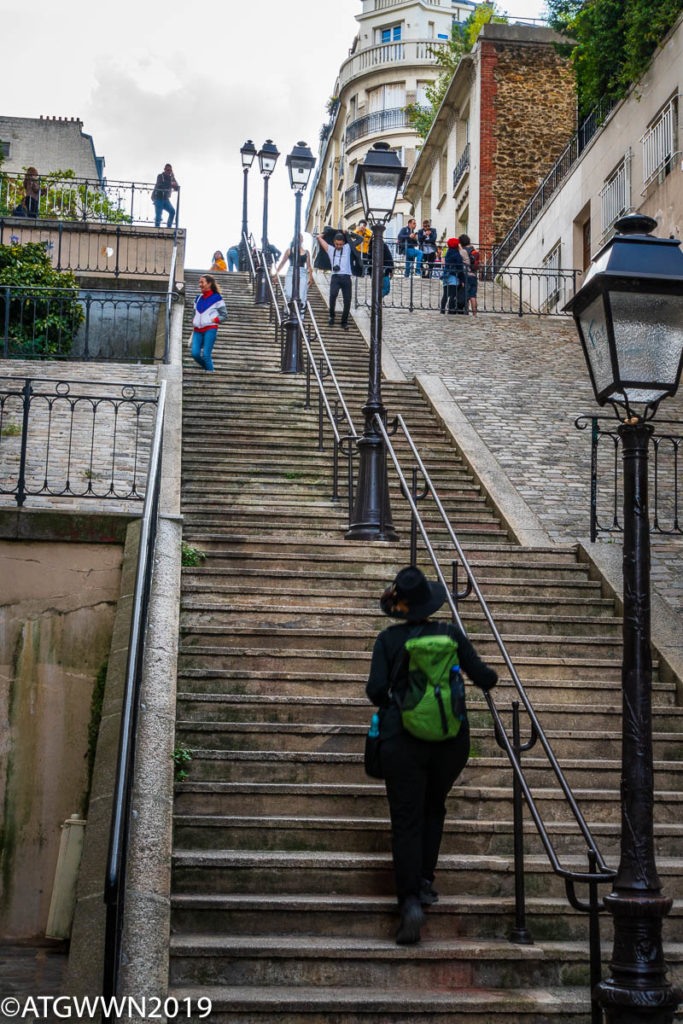 What I do for art & gardens! The steps up to Montmartre nearly did me in. My destination was Renoir’s garden at the Musée de Montmartre in the hedonistic arts district of the Moulin Rouge. 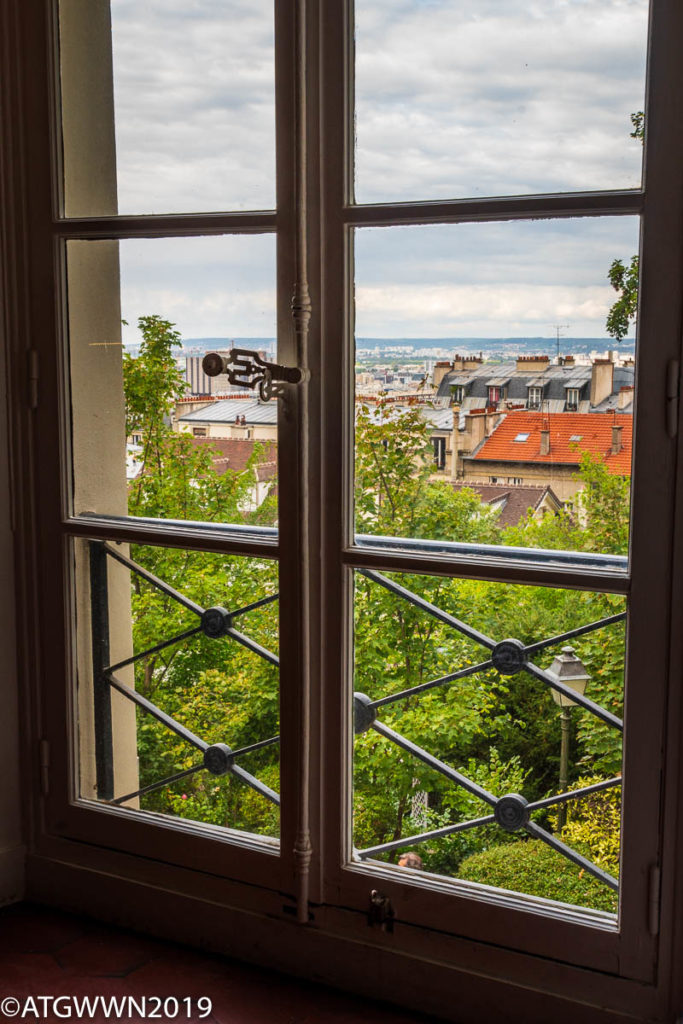 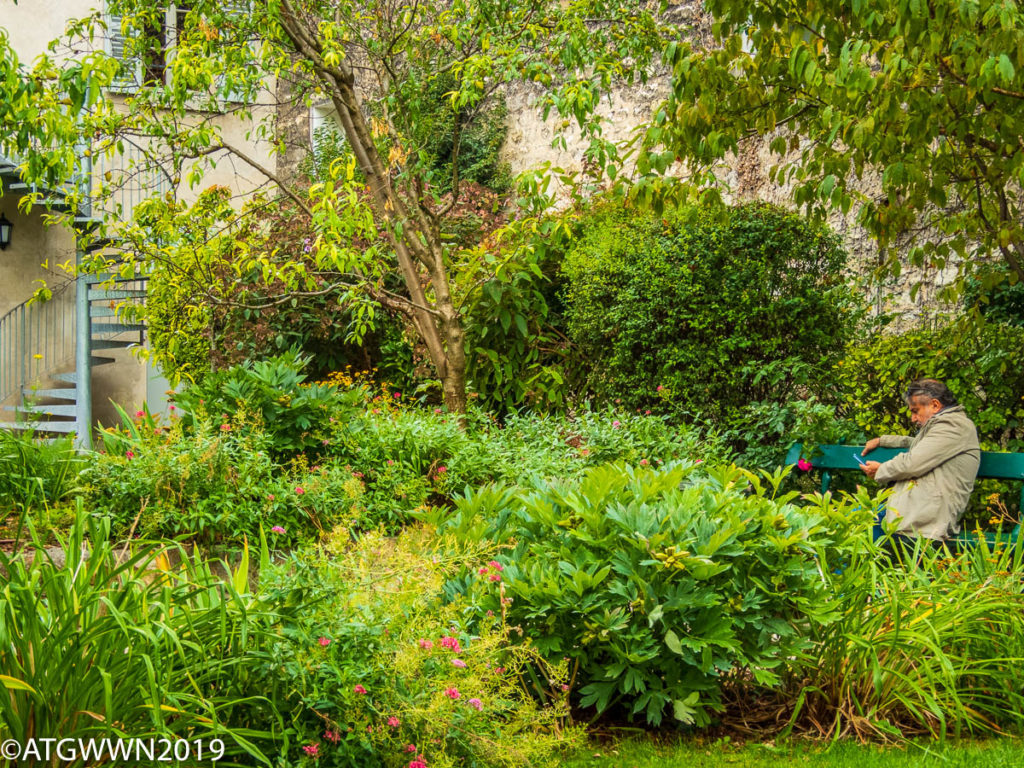 The garden came complete with a painterly Frenchman. . . .though today he was looking at his phone. 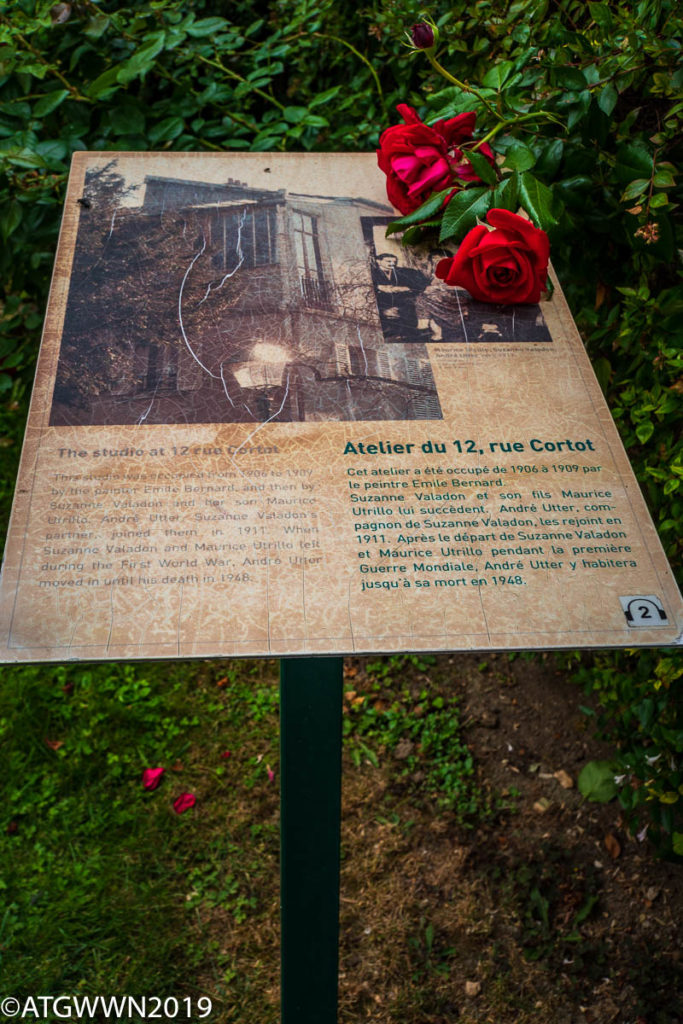 This is a museum with an outstanding collection of art (none of Renoir’s though) and the painting studio shown as if the artists are still working here is an additional bonus.  I’ll always remember this spot as the location where two pleasant 40’ish women targeted me. One politely inquired if I was in line for the museum entry while her accomplice targeted my crossbody bag. I never noticed a thing as she unzipped it, pulled up the velcro tab on an inside pocket, unzipped the money pouch and made off with 120 euros. Ahh. . . travel memories! 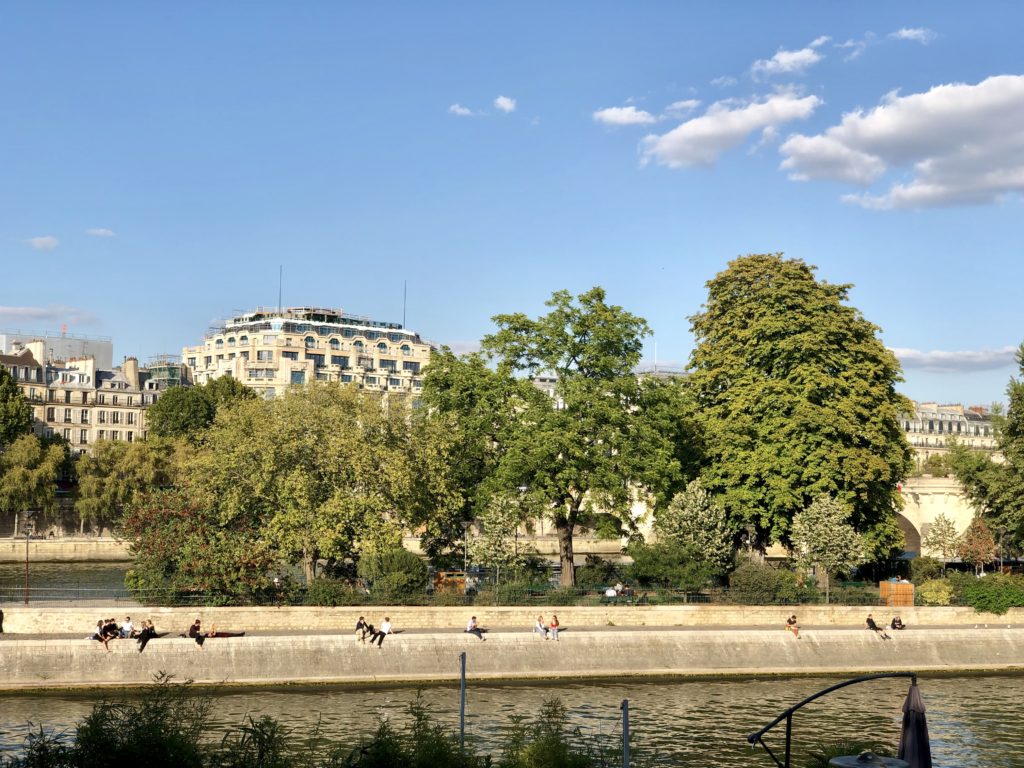 Square du Vert-Galant, is a tiny public garden on a little island in the center of Paris. You find it under the Place du Pont-Neuf bridge.  Its impressive collection of plants and trees earned it an ecological distinction in 2007. 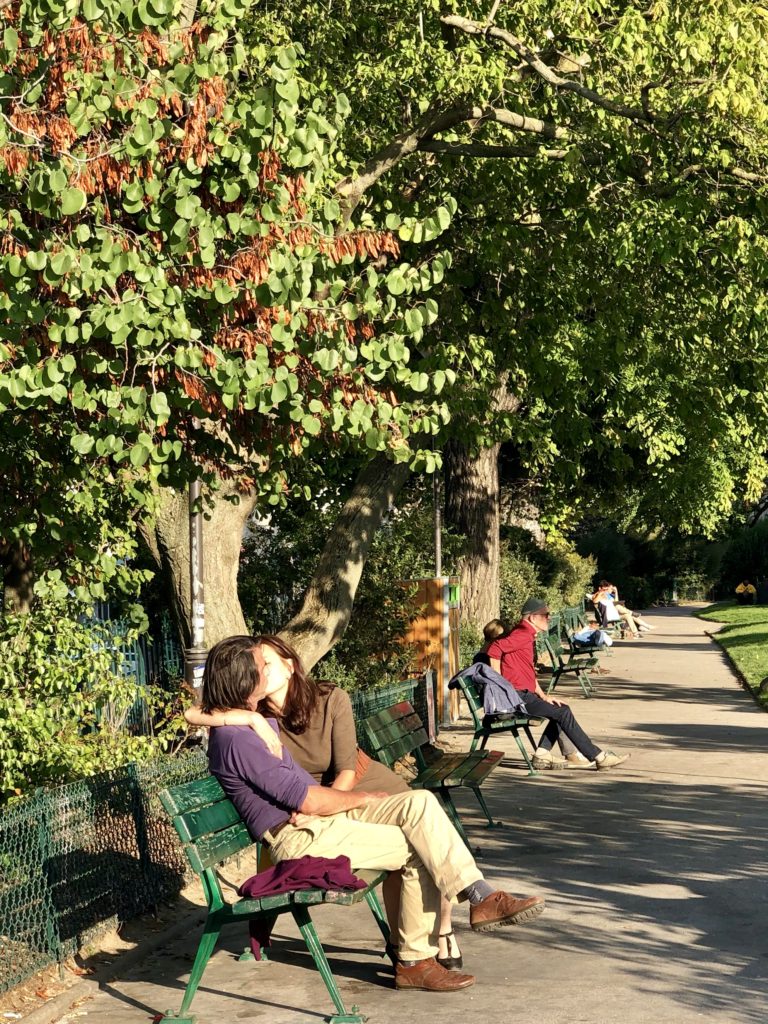 It is well-loved by locals for relaxing with friends and lots of kissing couples on benches. As I visited there was an impressive temporary sculpture exhibition. 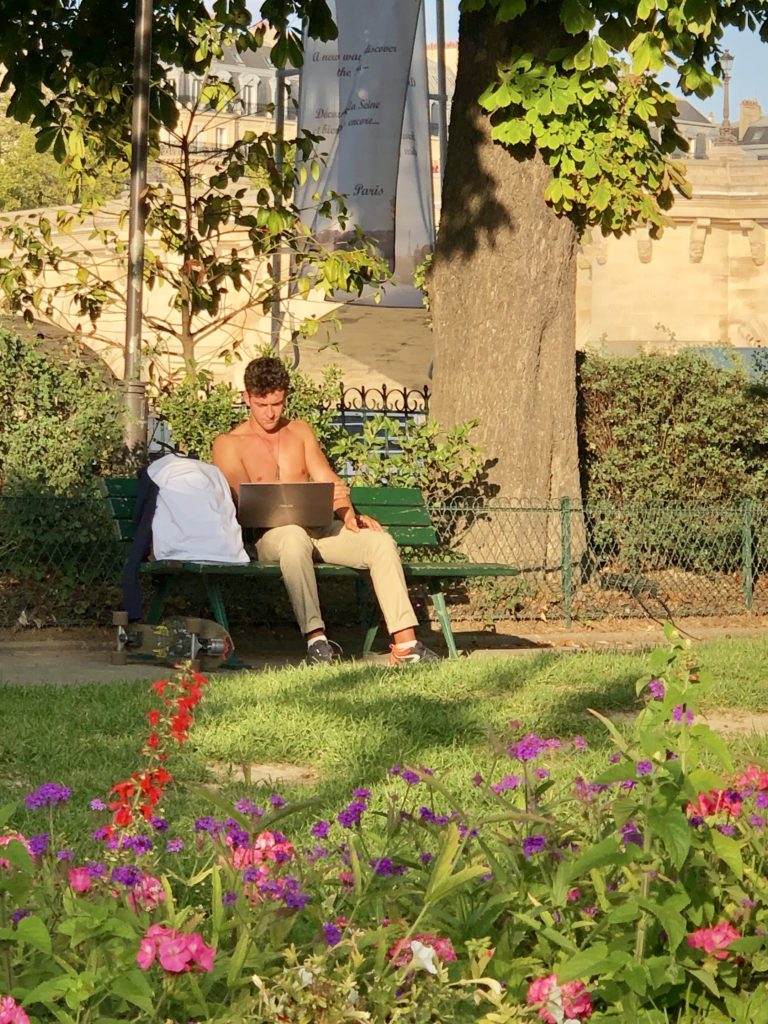 Pretty in pink flowers, families were sitting on the grass, small dogs were walking their masters near the shrubbery as above at street level the city activity rushed by. 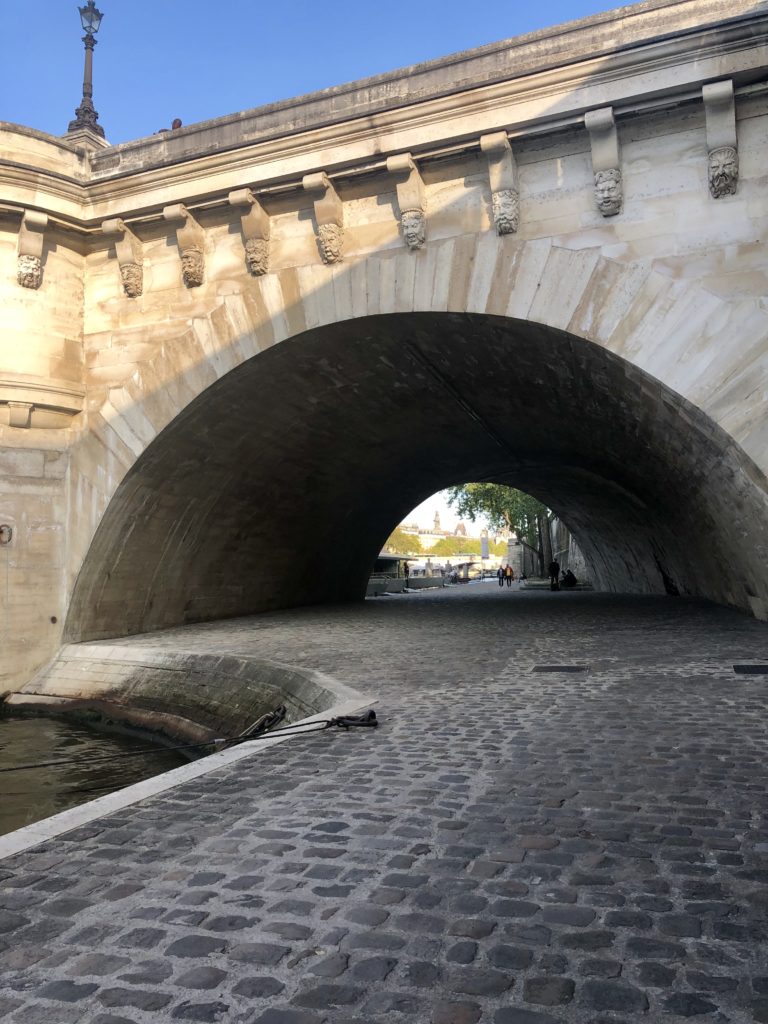 This residents of this city use its parks and gardens and as a tourist, I am grateful for the chance to explore these places.  Some can be rundown, this lovely site had a warning about rats, but gardens require effort and care wherever they are located. Paris does indeed have gardens both large and small.