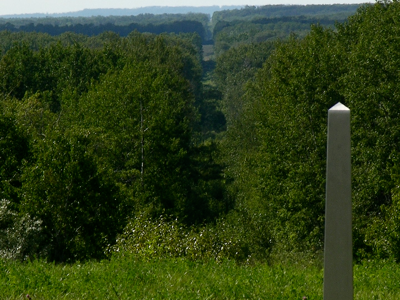 As I began my garden travels in August I fled the high temperatures of the Valley and I fled from the highly charged political debate engulfing our country.  I longed for peace in a garden as only nature could bring.   As our country and the world grapple with so many conflicts I try to remember conflict is part of life. Peace Gardens remind me citizens throughout the world see gardens as a path to peace. 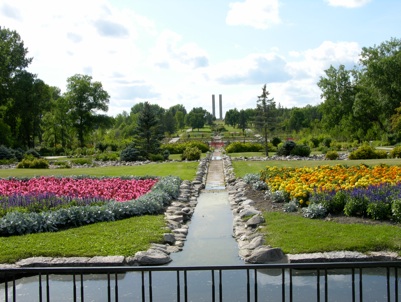 The idea of an International Peace Garden originated with Dr. Henry Moore, Horticulturist graduate of Kew Gardens in London and a resident of Ontario, Canada.  Dr. Moore was attending a horticultural conference in Greenwich, Connecticut in 1928 and was impressed by the congeniality and common interests of Canadians and Americans. He proposed a garden to celebrate this international relationship.  He believed a garden is “where the people of the two countries could share the glories found in a lovely garden and the pleasures found in warm friendships.”

The International Peace Garden spans Canada and the United States celebrating the longest unfortified border in the world. Near the geographic center of North America, Rugby, North Dakota, the garden begins where the natural water borders of the great lakes open onto the prairie and the prairie begins the rise to the mountains.

Dedication of the International Peace Garden took place on July 14, 1932.  “Horticulturalists and gardeners from both countries offered to carpet 400 acres with flowers and trees,” and celebrants pledged  “We two nations dedicate this garden and pledge ourselves that as long as man shall live we will not take up arms against one another.” 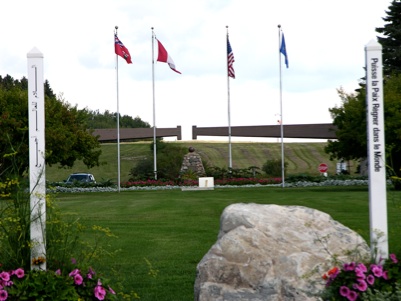 Of course the great depression changed and challenged everything.  Funds for development disappeared but labor appeared!  The U.S. Civilian Conservation Corps provided 600 men to work the 2400 acres donated by the two countries for this garden.  The men worked to clear brush land, build lagoons and construct the first building.  World War II then sapped all development.

As a world weary from war emerged in the late 1940’s the ideals of the Peace Garden helped in healing the wounds of war. Funds were collected from small towns, rotary clubs, veterans, chapters of Eastern Star, Masons and many more organizations to build a peace chapel, entry gates, picnic areas, rose gardens and all manner of garden dreams. Canadian and US Governments contributed funds to the garden’s development.

A channel of water blends the borders of both countries from the entrance gates to the Peace Tower at the end.  The Peace Towers dedicated in 1983 has four soaring columns symbolizing the dreams and ambitions of immigrants that built new lives in Canada and the U.S. with the common base of democracy.    The towering spires, two on the U.S. side and two on the Canadian side represent the four corners of the earth coming together.

Today the gardens include 400 acres of formal gardens with 180,000 colorful annuals, 7000 flowering shrubs, and 100’s of varieties of deciduous trees.  The sunken gardens have been revitalized this year with new plantings and a conservatory designed by French-Canadian architect Gaboury Etienne.  Opening in 2010 will be a contemplative garden designed around steel girders salvaged from the World Trade Center attack of 9-11-2001.  A future proposal for this extraordinary place is to establish a conflict resolution center on the garden grounds.

I did indeed find peace in this garden.  I was inspired hiking through the woodlands to enjoy the lake views.  The inscriptions in the peace chapel revealed words of wisdom and a bell carillon played softly on the hour.  Visitors wandered easily between the border speaking languages from around the world. 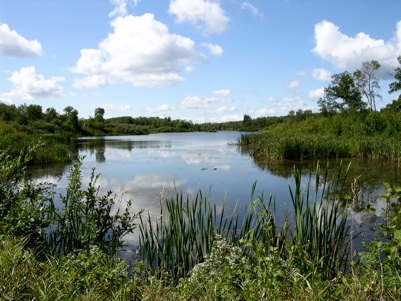 All of this history emphasizes the amazing power of a garden to bring people together with a love of nature and nurture celebrating our commonalities in growing flowers, trees and food.

There is now an International Peace Garden Foundation: Planting the Seeds of Peace, formed in 1992 established “to advance global friendship and international understanding through the creation of peace gardens and cultural exchange programs.”  Peace Gardens are developing around the world.

So I sought peace in a garden just as citizens throughout the world have done for years. Conflicts will continue and as gardeners we may intuitively seek out peace in our gardens but perhaps there is no higher goal than to help others find peace in a garden.  So let’s grow more gardeners and plant seeds of peace! 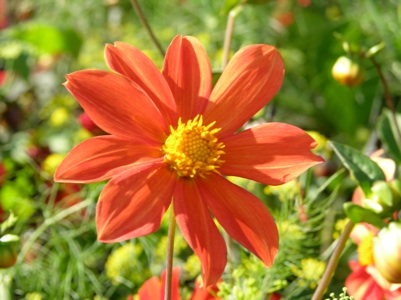