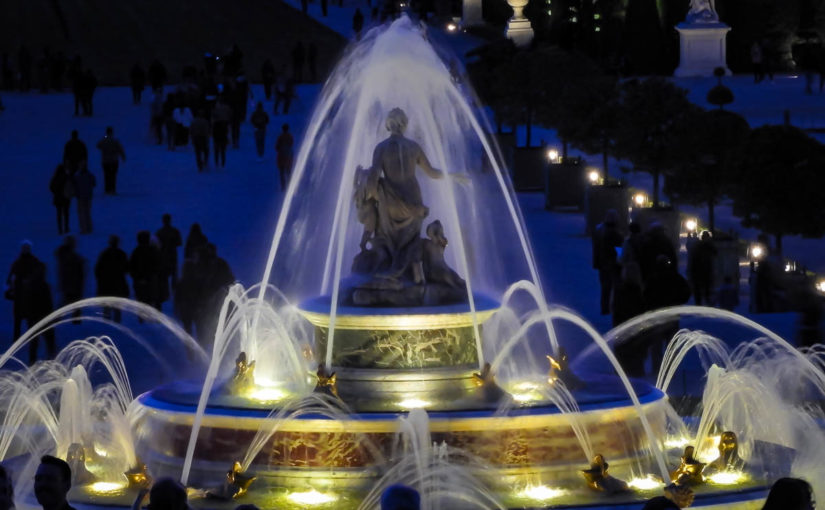 Versailles: Most recognized for the grand palace, the grounds play more than a supporting role; with 2100 acres of gardens, sculptures, and fountains.

Visiting Versailles is overwhelming; many people focus on exploring the palace and briefly visit the gardens. I did just the opposite, beginning my 15-hour day in the gardens. Even then, I walked only 12 miles of the garden’s 30 miles of pathways. I know I missed seeing so much of it.

Our daytime visit allowed us to find our way around the Allee’s, Basins, Groves, Parterres, and Terraces in the gardens. Imagine an elaborate private garden, large enough to hold extravagant parties, designed and decorated to the max, and then multiply that by ten each in a different style; this is part of what there is to see in Versailles.

The Ballroom Grove with cascading fountains, the Colonade Grove with marble columns and urn-shaped fountains, the Enceladus Grove where a giant is buried under the falling rocks of Mt. Olympus and surrounded by elaborate lattice framing with vining roses were my favorites.

The lush gardens are the setting for Flora, Bacchus, Diana, Diogenes, Daphne, Narcissus, Hyacinth, and multiple Apollos as well as nymphs, cherubs, gods, and goddesses of the classical periods. Ornate urns and vases high on plinths decorate the walkways. I became fascinated with the depiction of identifiable flowers carved in stone. The kitchen garden is 32 acres (13hectares), which is larger than the famed palace. The famous citrus trees in the Versailles boxes accent the swirling parterres outside the Orangerie.

Our strategy was to visit the gardens, explore the garden rooms or groves as they are named, and experience the sweeping views during the day. We visited the palace in the late afternoon before we had to exit the grounds at 6 pm. The evening festivities require a separate entry beginning at 8:30 pm and ending at midnight.

The elegance of the palace is a well-known story, but for me, the most significant element was seeing the garden views from every room. The gardens were designed to showcase evidence of the “King’s mastery over nature.” The famous Hall of Mirrors takes full advantage of the “Grand Perspective” showcasing gardens, lakes, fountains, and the grand canal. This view is where the nighttime festivities would occur, and while the palace is closed at night to we mere tourists, it is clear the view from the inside would guarantee a grand show.

During the break, we walked the streets of Versailles, the town, with its shady streets and intriguing architecture. This is a place where residents live in the historical shadow of the grand palace estate, both loving it and hating it at the same time.

The True Spectacle of Versailles

Alain Baraton writes in his book, The Gardener of Versailles, “a garden should attract lovers.” And “a garden’s capacity for inspiring romance should be a criterion for evaluation in terms of horticultural excellence.”

Every Saturday night in summer, thousands of lovers enter the gardens of Versailles. Lovers of spectacle, romance, and gardens come for an evening of magic.

It was hard to imagine how the evening could improve beyond the spectacular sunset greeting us for the evening festivities, and yet it became a marvelous party. People walked in a brisk stride and spoke excitedly in many different languages. We moved from fountain to fountain where gilded horses pulled Apollo in his gold chariot, and cupid tamed a sea dragon. Fountains overflowed with billowing clouds of fog (courtesy of dry ice?) cascading from the classical columns above. Laser beams streaked above the fog in multiple colors and streams of light. 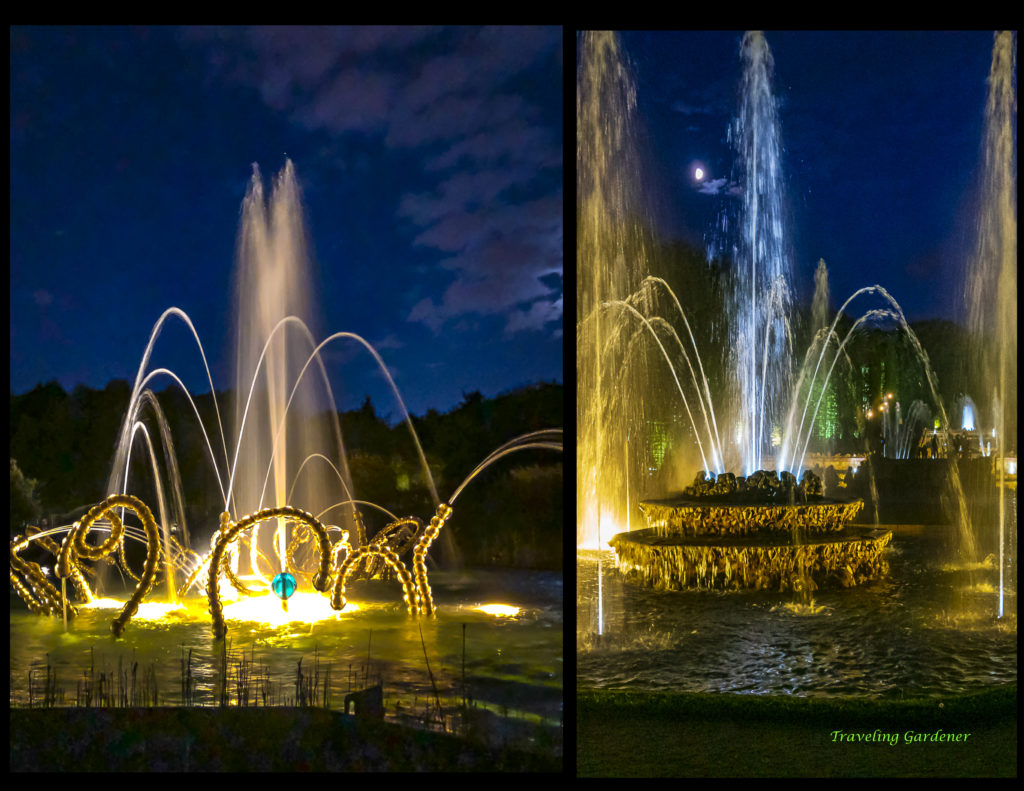 Clearly, the Louies, 14, 15 and 16 didn’t have lasers, yet history tells us each King incorporated all the latest special effects of the period. Summer parties became a competition to be bigger and more exciting than the last. The public was invited in. Walking the gardens, they were duly impressed by the power and grandeur of the monarchy. There were reenactments of naval battles on the grand canal; fires floated on water, theatrical performances, and fireworks. Fun while it lasted.

Our evening began with a red and gold sunset reflecting on the grand canal, setting the scene for what was to be an extraordinary garden experience. Historically, Versailles at its peak was a place of festivity and excess. Contemporary festivities in the gardens are designed to provide a sense of such excitement. Only on weekends do the 55 fountains flow for a few hours in Versailles. 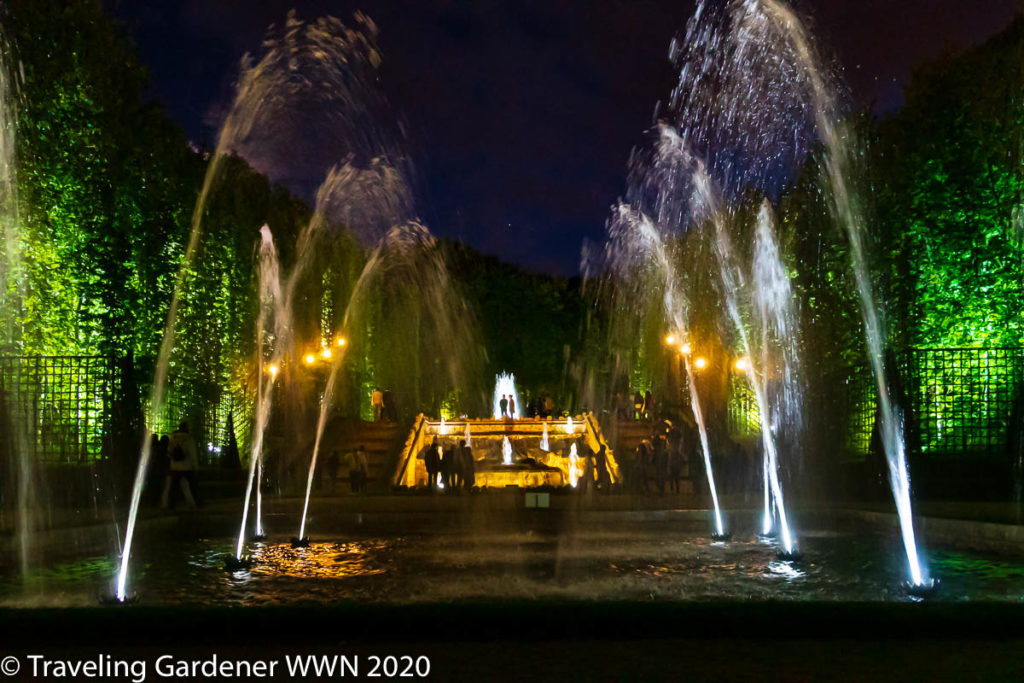 Fireworks began around 10:30 pm; dazzling on a perfect summer night. Elaborate fireworks shot high overhead, and dancing flames on the grand canal rushed toward the spectators. As a slightly under- tall person, I managed to see through an open spot just between the shoulders of the people in front of me. There were lots of lovers out for this exciting evening.

The show continued with color, lights, action, and fireworks timed to the music. There wasn’t a live orchestra as there would have been during the monarchy, but it was exciting. As the party ended with an enormous display of fireworks, the crowd began its walk to the exit.

Though it isn’t just any walk home, as you cross the lit terrace of the palace, stroll under the grand arches toward the gilded gates with the Sun King face. You walk down the long incline toward town, passing below the equestrian bronze of King Louis XIV and savor this unique experience in such a historical place.

The entire idea of Versailles is overwhelming. When you realize a series of Kings, Louie, 13,(the hunter) Louie 14, (the builder) and Louie 15 (the curious botanist) and the 16th, the one who lost his head, had so much power, directed so much labor, controlled so much wealth for so long and created this palatial estate. History is full of stories, both turbulent and tender. The grand estates, palaces, and art are a financial commitment of epic proportions. Versailles is grand and grotesque. Setting aside the ramifications of such history, I set out to simply see what there was to see, and it was dazzling.

In the summer of 2020, it is currently unknown if these festivities will happen. Versailles makes clear history is filled with stories of tribulations, disappointments, and surprises, and we are living in a historical upheaval right now. It is my hope garden lovers will once again experience such a magical night.

Versailles was originally a hunting lodge with no gardens, for Louis 13 in 1638. The grounds were not good for gardening, Saint Simon said, “the most sad and barren of places, with no view, no water and no woods.” Though it isn’t clear how the name Versailles came to be, “In medieval times, the word versail meant cleared land.” The estate encompassed 7400 acres at its pinnacle.

Louis 14 built the place out. During his reign, he commanded a workforce of 36,000 laborers to dig by hand the 6000′ long canal running east to west in just five years. The Sun King believed he was God, and he demonstrated this in part by arranging nature to perform for him and flatter him. The sun rose and set on his palace. He focused on antiquities, Apollo, light, vegetation, and fireworks.

Louis 15, according to Alain Baraton, was deeply interested in the scientific elements of the garden. His botanical gardener Claud Richard was encouraged to conduct scientific studies on why corn rotted, to try to grow coffee, figs, pineapples, geraniums, strawberries, and other tropical plants and trees. Hot houses were built to protect fragile plants.

Louis 16 wanted even more beauty and lavish lawn parties, and well, he is the one who lost his head.

Travel writer Rick Steves advises not going to Versailles on the weekend because of the crowds, which may be true, but then I would have missed all of this.

The Gardener of Versailles: My Life in the World’s Grandest Garden, Alain Baraton, ©2014 A memoir of more than 40 years of living and working in the gardens of Versailles. This was a wonderful book; written by a man who loved and respected the gardens’ history and importance.

A Little Chaos is a 2014 British period drama film directed by Alan Rickman. It is not considered historically accurate but it gave me a feel of how the construction process might have been done at the time and the magnificent ballroom fountain it represents. Watching it after visiting here I found it intriguing. 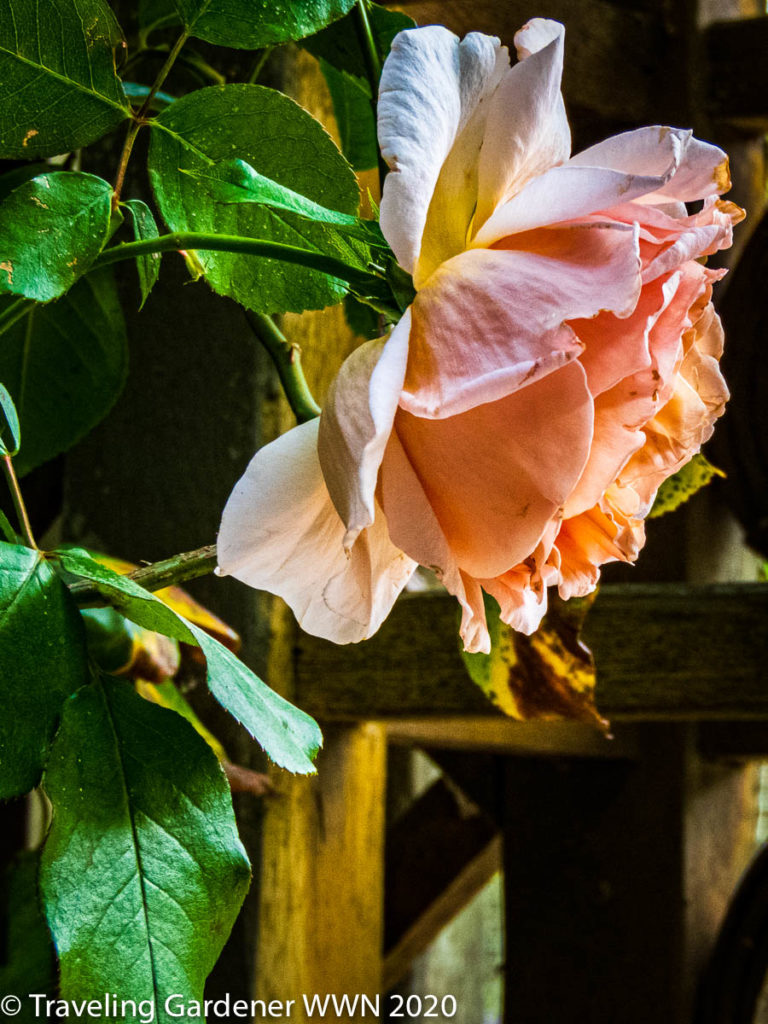 On June 21, this story by By KIM WILLSHER,  ran in the LA Times.  “We want to turn the page, forget this disease, which we have beaten, and get back to normal at Versailles. This is important because we want to say to American tourists: ‘Please come back,’” said Catherine Pegard, who runs the palace. “Versailles embodies the relationship between our two countries, and we are feeling the absence of U.S. visitors.”

16 thoughts on “Last Summer’s Magic in Gardens of Versailles”