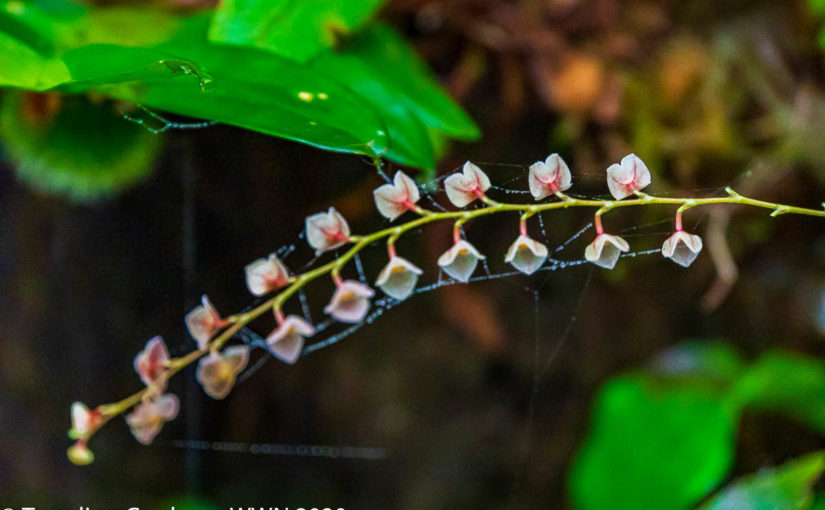 “As for spiders, how the dew hangs in their webs even if they say nothing, or seem to say nothing.
So fancy is the world, who knows, maybe they sing.”
Mary Oliver 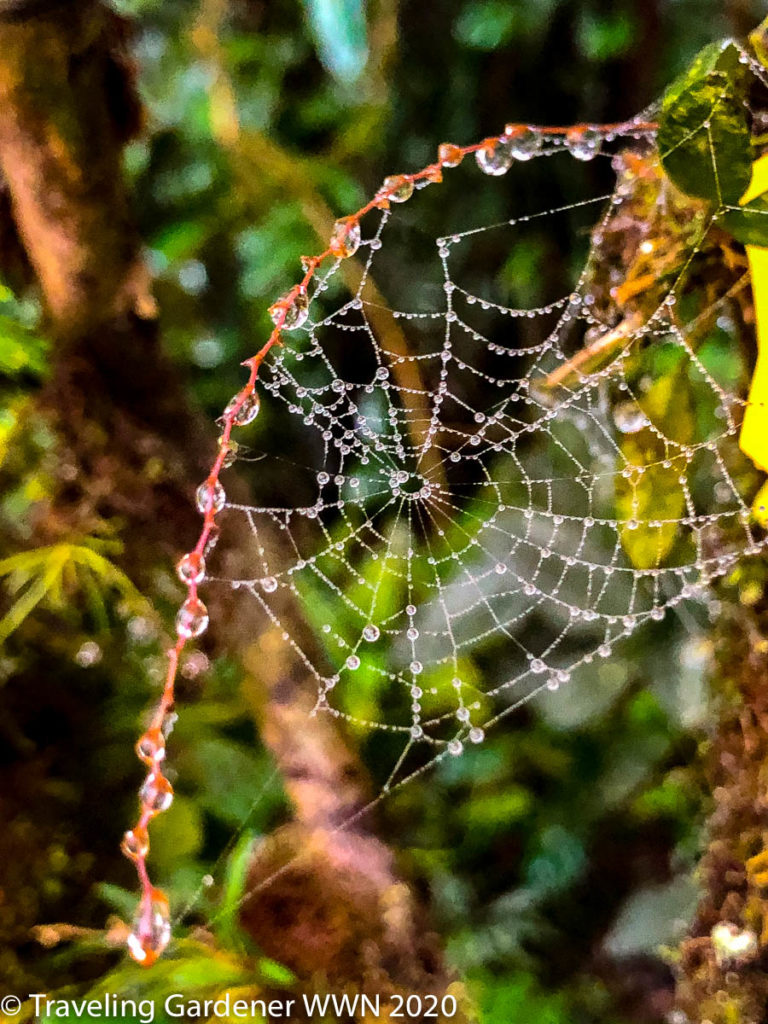 Years ago, on a phone call, my Mother informed me she had just learned of a scientific study that found we are never at any time more than three feet away from a spider. I shuddered and scoffed at such nonsense.

Later as I was washing up a few breakfast dishes, I looked up in the corner of my kitchen window, and there was the tiniest of spider webs, clearly less than three feet away from me!

The bane of my Midwest childhood were the scary yellow and black garden spiders guarding the tomato plants and the granddaddy longlegs ambling around my bedroom.

My Arizona garden, especially in the heat of summer, has very few spider surprises. There is the occasional black widow with their tough, messy web, but truly beyond this, I am free. I wonder if my passion for gardens would be quite as strong if I were fighting off more spiders?

When I go traveling and wandering through gardens in different climates, I find spiders. I thought it would be fun to share some of my best spidey moments, with apologies to my sister and other arachnophobes.

Fair Warning graphic images follow, and I am not describing a scientifically based experience.

Everything seems charming in an English garden, and I found the black iron gates at Nyman’s, one of the National Trust’s premier gardens (in Surrey), so very pretty and fitting for this elegant estate. On a misty morning, this architecturally stunning spider web just added to the charm. I don’t see a spider here, but why wouldn’t it be in there somewhere?

Like spiders, I’ve heard that Legos cause fear in the night for a barefoot parent, but at the Green Bay Botanical garden (Wisconsin) their Lego art display created the dreaded yellow and black garden spider, with nearly four foot (125 cm) legs. Clearly an exaggeration in size, the black and yellow garden spider is only about three inches (7.62 cm) max.

The biggest spider in the world is the Goliath Bird Eater spider (Theraphosa Blondi), weighing in at six oz. (170 g.) with legs one foot (30cm) in length! I haven’t seen this one!

Berkley Botanical Garden is located in Strawberry Canyon above the main campus overlooking the Golden Gate Bridge. Filled with over 10,000 trees and plants from all around the world, they decided to see if anyone would notice a big black and yellow spider high in the trees.

Would you add a spider sculpture to your garden? Really, what are spiders good for? Spiders are a pest control system, and really, we should love them for eating roaches, mosquitoes, and flies! Yet we (yes, me) see them as a pest, best dispatched under a shoe. (Actually, I believe I wrote it into my wedding vows whose shoe does the dispatching.)

Some spiders like moist, damp climates, and South and Central America offer excellent conditions for spiders. In the Nectandra, a montane cloud forest in Costa Rica, I found a hammock shaped spider web sparkling with raindrops designed to capture any fly or crawling critter that might come their way.

In Else Kientzler Botanical Garden in Costa Rica, I discovered the Golden Silk Orb Weaver spiders. The web is golden and very strong. The female spider is nearly two inches long (5.1 cm) in size, and the male is less than half the size of the female. Spiders are great hunters, and the Golden Orb lives in groups building a wall of web hanging high in the sky between trees, creating a buffet table of trapped flying insects.

The strength of the web is so great and color so distinct that attempts to use it in fashion clothing began as early as the 1900s. There is a golden cape on exhibit in the Victoria and Albert Museum in London, made from this spider’s web silk.

“Another possible use of Nephila silk lies in tissue engineering. A study from the Medizinische Hochschule Hannover reports that processed Nephila silk is an excellent scaffold material thanks to its biocompatibility, mechanical strengths, and its property to promote cell adhesion and proliferation. In particular, the silk acts as a suitable guiding material for peripheral nerve regrowth.” Wikipedia

I looked at these massive, messy webs linked between trees and stared in awe and horror, remembering my response to walking into even a flimsy spider web. These spiders were everywhere in this garden.

Some spiders prefer a dry climate. Tarantulas come to mind, and as I was walking on a path in a dry forested area of Costa Rica, a bright orange tarantula ran straight at me. No photo is available for this encounter.

Perhaps you heard the USA is about to be invaded by Murder Hornets. The news does seem quite alarming, but have you heard about what will follow them? Flying spiders!  A variety of jumping spiders are coming not far behind the murder hornets!

Jumping spiders do possess venom but not a level posing a threat to humans. Humans are, however, in great danger from Jumping spiders because if they fly at you, you’ll likely damage yourself trying to get out of the way.

Humans have many reasons for fearing spiders; for one, something with eight legs seems to have a speed advantage. Even if you are a fan of the storybook, Charlotte’s Web, spiders rarely make it on a favorites list. It is just a bit menacing if the last thing you see as you turn off the light is a spider on the ceiling. But rest comfortably; someone ran the numbers and on average a spider wanders into our bed only about two times a year. I don’t know what size spider that might be, but maybe it’s after a mosquito and that would be helpful! Oh, and while you are sleeping, remember it is an urban myth that everyone swallows as many as eight spiders a year.

In the meantime, keep an eye out for the incredible designs of spider webs; after all, if there is a web, there will be a spider there somewhere. All the web patterns are unique because they build their houses differently. Try to pause for a moment to admire the creations. 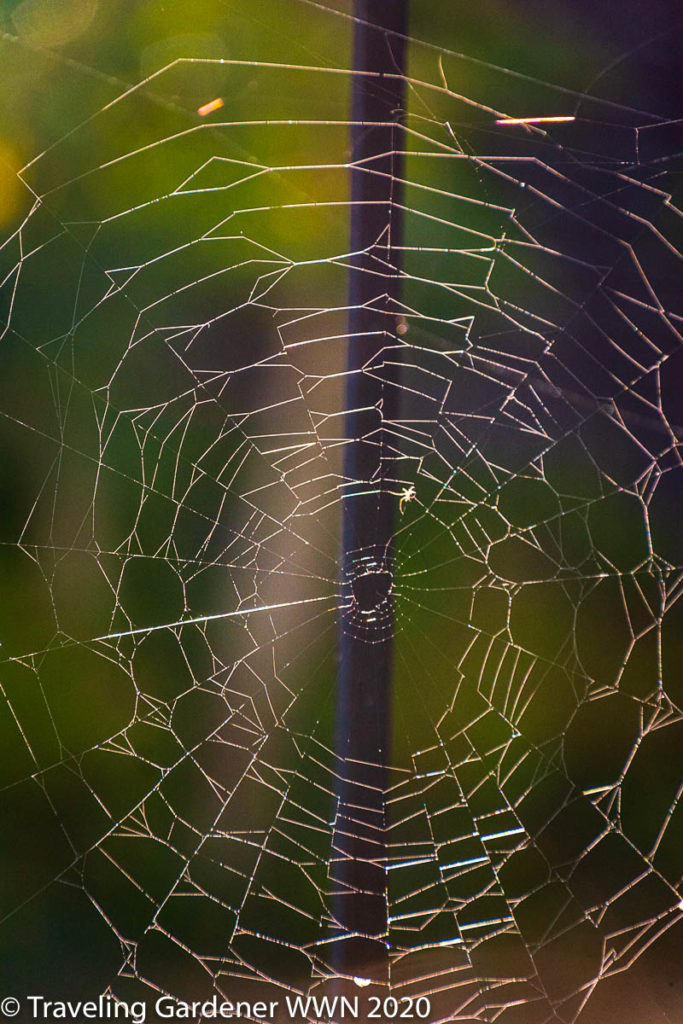 So Wikipedia can be fascinating and (of course not always a correct source) but here is a photo of the golden spider silk cape and the most amazing description of how the spider silk was collected. 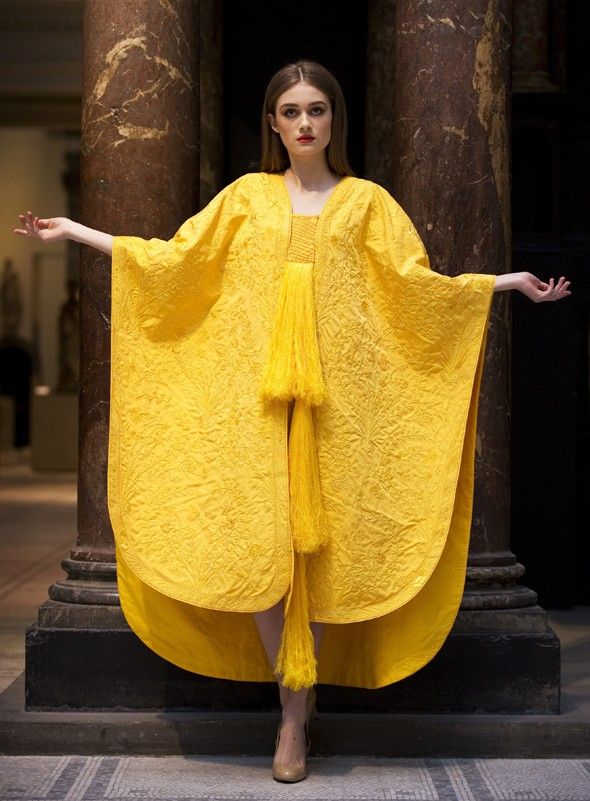 In 2004 a textile designer, Simon Peers, and an entrepreneur, Nicholas Godley managed in three years’ work and using 1.2 million Golden silk orb-weavers (collected in the wild and released some 30 minutes later after they produced the silk) to produce a shawl that was exhibited at the American Museum of Natural History in 2009.[29][30] By 2012 they managed to produce a second, bigger garment, a cape, that, together with the shawl, were exhibited at the Victoria and Albert Museum in London.[31]

8 thoughts on “This World”